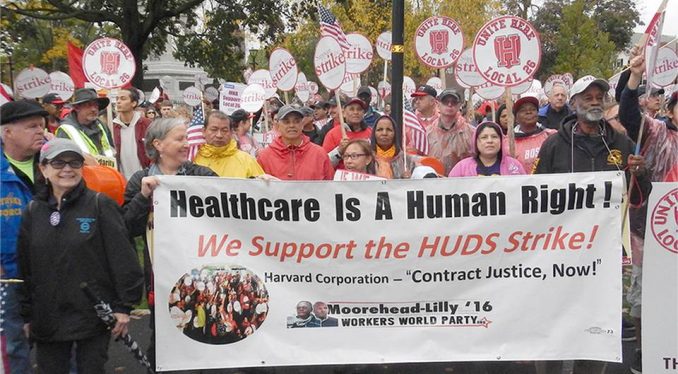 For 20 days Harvard Square was the scene of the most raucous, disruptive demonstrations this town had experienced since the Vietnam War. The workers at Harvard University Dining Services were on strike and Harvard wouldn’t budge. But finally the bankers who control the Harvard Corporation caved, literally overnight.

At  1:30 a.m. on Oct. 25, leaders of UNITE HERE Local 26 announced “total victory” to cheering strikers and students who had been occupying the square and beating drums throughout the night.

The 736 cooks, dishwashers and dining hall workers celebrated the details the next day at a packed ratification meeting. They won retroactive wage increases amounting to $3 an hour over the five-year contract; a substantial, first-time-ever stipend during summer layoffs; better, less expensive health insurance, including for retirees; increased uniform and shoe allowances; strengthened gender identity nondiscrimination terms; and union-power language that exceeded their initial demands.

And there was more.

The new contract established a Task Force in which union members will exercise power to stop discrimination and promote diversity in the workplace — a demand the corporation insisted it would never accept.

In desperation to end the strike, Harvard’s board also agreed to pay the workers’ check deductions during the 20-day strike at 100 percent for health, vision, dental, life, long-term disability, home and auto insurance, plus parking fees and public transportation to and from picket lines. Some strikers who work at the subcontracted medical school and faculty club will also receive a $500 strike bonus. 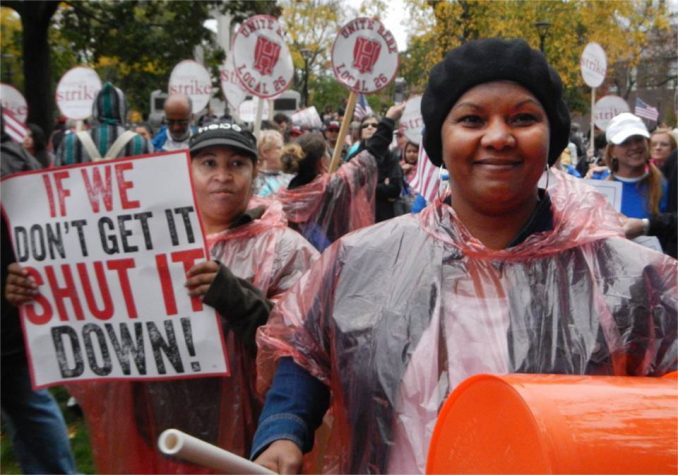 The whole world knew that the Harvard Corporation, with its $40 billion endowment, could afford contract justice for those who feed its community, who earned on average less than $35,000 a year before the strike.

Ed Childs has been a cook at Harvard for 42 years. He’s a union founder, a Local 26 Chief Steward and a National Committee member of Workers World Party. Childs explained: “Harvard’s attack was entirely political. What the bankers from Goldman Sachs, Bank of America and Citigroup, who direct the Harvard Corporation, wanted most was to pick $4,500 per year of health insurance deductibles and copays from our members’ pockets. They had forced this on professors and other campus workers first; it wasn’t just their local program.

“Read the headlines this week. All across the country capitalist insurance companies have announced increases of 27 percent and up for poor people using so-called Affordable Care Act products. We decided it was up to the cooks and dishwashers to draw the line for everybody and fight Harvard’s dangerous program of austerity!” 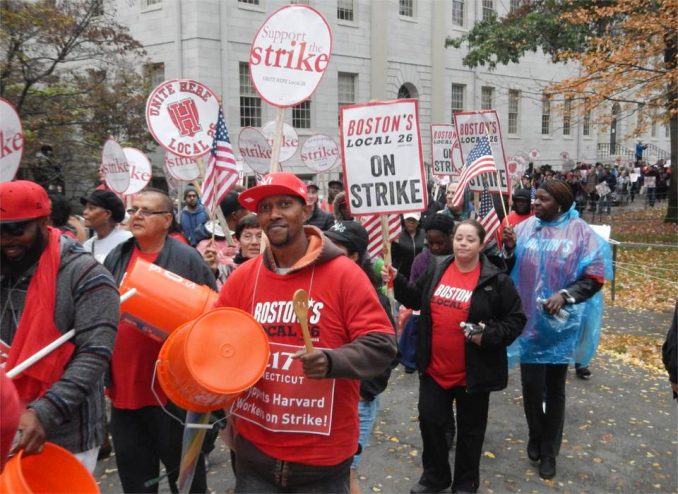 It wasn’t just that the students, faculty and other workers on campus truly love their dining hall family, who sustain their work from breakfast to midnight snacks — even though that bond was evident daily in mass demonstrations that shook the ivied walls for three weeks.

For nearly a year leading up to the strike, Local 26, plus students and faculty, had built a political coalition based on the demand that “healthcare is a human right.” Especially at Harvard’s Medical School and School of Public Health, hundreds of students organized and hosted meetings with dining hall workers to develop solidarity. Their public manifestos tore back the veneer of Harvard’s academic liberalism and exposed its neoliberal core.

Student publications and protest actions at local corporate offices called out the interlocking connections of the Harvard Corporation and its Board of Overseers with Wall Street’s biggest banks and insurance companies, as well as with high tech and pharmaceutical giants like Google, Merck, Abbott Labs and CVS. They put anti-labor Harvard President Drew Faust in the same boat as criminal pharma CEO Martin Shkreli.

In a Sept. 30 public letter that went viral before and during the strike, two students wrote: “As medical students at Harvard, we were deeply troubled to learn that our university was proposing changes to dining workers’ health plans that would make essential health care unaffordable. It is shocking that these low-income workers would be better off financially if they were not offered employer-sponsored insurance.”

As the national stakes mounted and Harvard dug in, the International UNITE HERE leadership poured in vital resources and staff from San Francisco, Las Vegas, Detroit, New York and elsewhere to fortify the strikers’ fund and boots on the ground. Local 26 President Brian Lang and chief negotiator Michael Kramer joined nine courageous women strikers, Black, Latina and white, in civil disobedience arrests on Oct. 14 that shut down Harvard Square for hours. Meanwhile, more than 500 strikers and their allies banged drums, blew whistles and proclaimed, “No justice, no peace!”

The next Saturday, Oct. 23, the Massachusetts AFL-CIO organized a demonstration of 2,000 in Harvard Square. As speakers blasted the corporation’s greed from the back of Teamster Local 25’s flatbed truck, that union’s president threw $10,000 into the war chest. Despite a force of militarized police lining the way, Cambridge’s main thoroughfare was shut down as a militant march on City Hall was joined by busloads from New York, Atlantic City, Philadelphia and New Haven.

Only one U.S. presidential campaign weighed in on this literally life-and-death national issue. The Monica Moorehead/Lamont Lilly campaign of Workers World Party was engaged through the candidates’ daily presence, assistance and pro-strike publicity, and they got an enthusiastic response from many strikers. 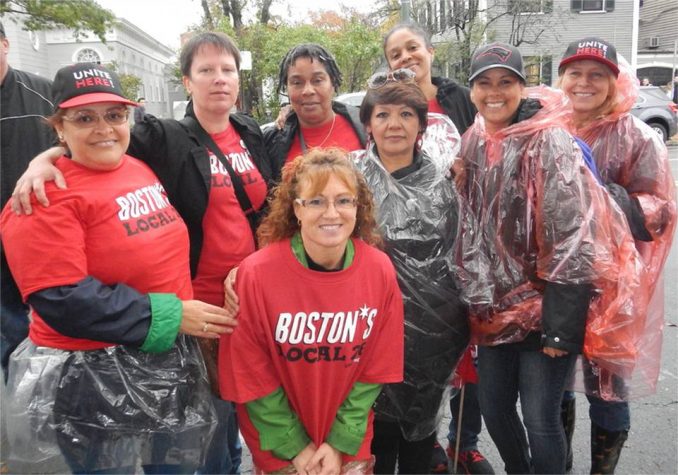 Lawrence Summers has been a professor and president of Harvard, a chief economist at the World Bank, Secretary of the Treasury in the Clinton administration, adviser to the privatization of post-Soviet states and a favorite millionaire ideologue on the Wall Street lecture circuit. He infamously remarked while Harvard president that women are “underrepresented” in science and engineering due to a “different availability of aptitude at the high end.”

The HUDS strike was led by women — Latina, African American, Caribbean, Asian, Indigenous, white, LGBTQ — who make up more than 60 percent of the workers. They engineered ear-splitting disruptions that created a profound crisis for the corporation and its overseers.

While traditional picket lines played a role at 40 gates, strikers took on the street tactics of Occupy Wall Street and the Black Lives Matter movement. For 22 days, even after the “tentative agreement,” strikers daily converged from their strike posts to form mass marches for miles through “private” campus courtyards and inside buildings, turning five-gallon food buckets and kitchen spoons into weapons, along with whistles, trumpets, trombones, cymbals and bullhorns.

The slogan “No peace” became reality for the bosses, from the tony business and law schools to the Crimson Homecoming of alumni and the usually staid Charles Regatta, whose 300,000 spectators were drawn into the inescapable fight. President Faust heard the constant drumbeat, day and night for 22 days, as protests followed her every move.

Robin McDowell, a first-term masters student focusing on labor history, gave WW this eyewitness account of the walkouts and occupations of Oct. 25–26:  “At 2 p.m., the sound of drums and chants was heard all over Harvard Yard. Undergraduate and graduate students flocked to Massachusetts Hall to begin the walkout and march to 124 Mt. Auburn Street where negotiations were taking place.

“When we arrived, workers lined up outside the doors as students poured into the lobby, still chanting, still beating on buckets. It felt like the four-story building was shaking with our energy. Curious employees came to the windows and watched.

“After about 15 minutes of chanting, we all sat down, almost in unison. Everyone seemed to understand that we weren’t budging until Local 26 negotiators emerged victorious. We heard that we’d see the end by 5:30. After 5:30 rolled around with no word, we sat on the hard marble floor, reading books, talking amongst ourselves. At 6 p.m. the doors would close, so everyone inside texted friends and posted calls to social media telling people to arrive by then. Employees began leaving work. One woman encouraged us, ‘Keep this up. It’s working!’ as she left for the day.” 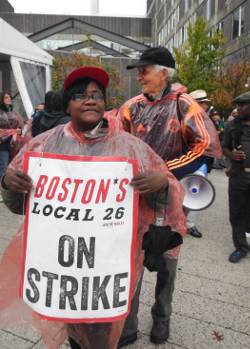 The Boston Globe and New York Times rushed an editorial and op-ed to web-print late that night announcing support for the strike — showing an open split among Harvard financiers.

The strike settlement resulted in HUDS workers paying substantially less for health insurance than before. They got a better plan design than President Faust’s own family. All this exceeded the union’s goal of $35,000 a year and was a direct reflection of the power the rank and file were able to bring to the street, despite all the difficulties, sacrifices and hardships.

As strikers return to work, these victories are being played out on the shop floor. At Adams House, the workers got a rousing ovation from students at breakfast.

Sarah Cleary, one of the strikers who was arrested and a cook at a “Restaurant Associates” isolated, subcontracted shop at the medical school’s Longwood campus, described her experience: “Being on strike was truly one of the most powerful experiences of my life. Some of us in a way didn’t want that experience to end. I’d never been active in the union before. There wasn’t even a shop steward in my kitchen.

“The first day back, I told my manager that I’d be assuming the responsibility of shop steward from now on. He told me, ‘Fine, you can talk to employees during breaks and after your shift.’ I look forward to the new contract printed and in my hands.

“It calls for no discrimination for union activities, and it gives shop stewards the right to conduct union business with members anytime while on the clock. [These two are first-ever worker-power victories.]

“I am very much looking forward to being a part of building the union stronger and using this experience of victory in struggles to come.”