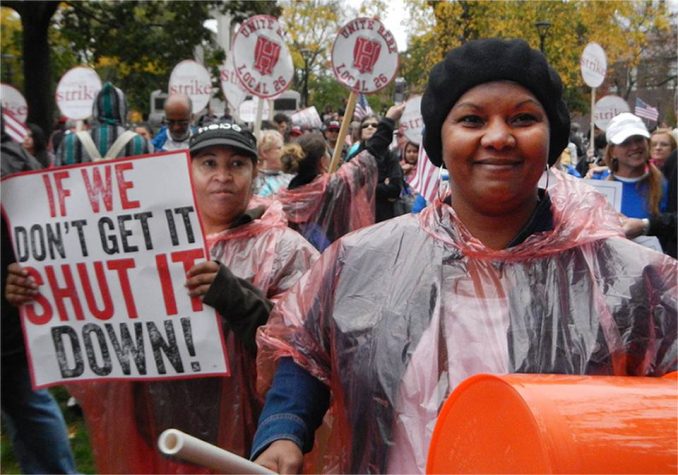 Update, Oct. 25 – The dining service workers of UNITE HERE Local 26 have beaten back the billionaire university for a big
win. At 1 a.m. on Oct. 25, HUDS workers announced a tentative agreement that met their demands on health benefits and wages. Hundreds of Harvard students had militantly occupied the negotiating site in solidarity, chanting, “If WE don’t get it, shut it down!”

Cambridge, Mass., Oct. 22 — More than 1,000 striking dining hall workers and supporters, members of UNITE HERE Local 26 in Boston, shook and rattled Harvard University’s ivory towers today in the biggest show of fightback and labor militancy yet, on the 18th day of their strike. Massachusetts Avenue was shut down for more than an hour as the multinational, multilingual union members, 60 percent of whom are women, chanted “Shut it down!” Earlier in the day, a group of Harvard University Dining Service workers and supporters marched on the Head of the Charles Regatta, the world’s largest rowing event held on the Charles River in Massachusetts.

The dining hall cooks, servers and dishwashers are showing by their resolve that it is they — and not the wealthy Harvard Corporation and its $37 billion endowment — who are in control of their destiny. The HUDS strike is raising the crucial demand that “health care is a human right!” The union is demanding no concessions on the health care plan they currently have and refusing the huge deductibles and copays that Harvard is trying to force on them.

The workers are holding the line for quality, preventive health care for workers and their families, and their fight for this basic human right has struck a chord worldwide. More and more education workers are coming under attack from big business/big education institutions like Harvard, which are run by representatives of Citigroup, Bank of America and Goldman Sachs. They are also fighting for an annual base salary of $35,000.

At the rally, the Harvard 9 — striking women who were arrested last week for sitting down in the middle of Harvard Square — promised to “get arrested again until we win!” They spoke from a huge flatbed truck stage provided by Teamsters Local 25, and were followed by a long line of students from the Harvard Medical School and the Harvard School of Public Health.

Students from Tufts University, Northeastern University, the University of Massachusetts-Boston, the Massachusetts Institute of Technology, and Wesleyan and Yale universities came to show support. On Oct. 17, 500 students got up in the middle of their classes and walked out. They marched past cheering strikers and held a rally in Harvard Yard. A delegation from the Monica Moorehead/Lamont Lilly Workers World Party Presidential Campaign marched too.

The strikers’ militancy was matched by the unprecedented display of labor solidarity at the rally. Roxana Rivera, president of 32BJ SEIU’s District 615, joined after participating in a similar action minutes before at nearby Tufts University. “On behalf of the 18,000 members of my union who do much the same kind of work you do, I tell you that we also represent 1,000 workers at Harvard, and we may be joining you on strike too soon!” Immigrant workers are the backbone of both Rivera’s union and Local 26.

The huge Teamster presence was organized by Boston Local 25, whose president, Sean O’Brien, chaired the rally. ”When you take on Local 26, you are taking on 1.4 million Teamsters,” he shouted to the roaring crowd. Teamsters have donated $10,000 to the HUDS strike support fund.