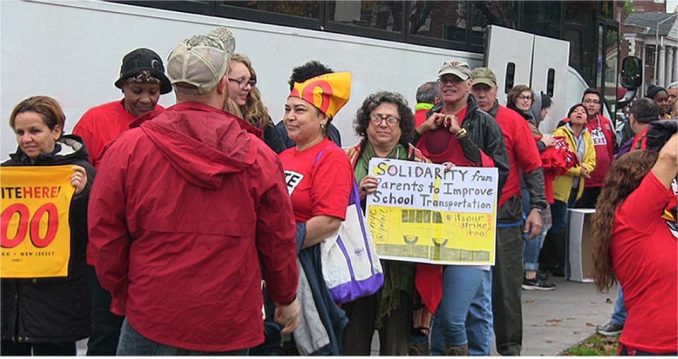 A busload of workers from UNITE HERE Local 100 in New York arrived at Cambridge Common in Massachusetts on Oct. 22. They came in solidarity with the Harvard University dining hall workers, who have been on strike for better health care benefits for several weeks. Members of Parents to Improve School Transportation and Community-Labor United for Postal Jobs and Services joined Local 100 on the bus.

Along with 1,000 Local 26 supporters, we marched through Harvard Yard and down Massachusetts Avenue to City Hall, where we had a second rally. Local 100 militantly chanted, “No contract, no peace!” and many other chants throughout the march.

On the way home, Maldonado strongly stated that, in solidarity, Local 100 will supply staff and resources to the Harvard dining hall strikers’ campaign. Some of the children on the bus chanted, “All day and all night! Harvard workers on strike!”

Local 100 will celebrate the passing of a New York City food service worker retention bill on Oct. 31 at 4 p.m. on the steps of New York’s City Hall. This bill will make sure cafeteria workers can’t be unfairly fired when buildings undergo new ownership. The new owners are now required to keep the workers for 90 days; workers can take violations to the Supreme Court.

Workers united will never be defeated!