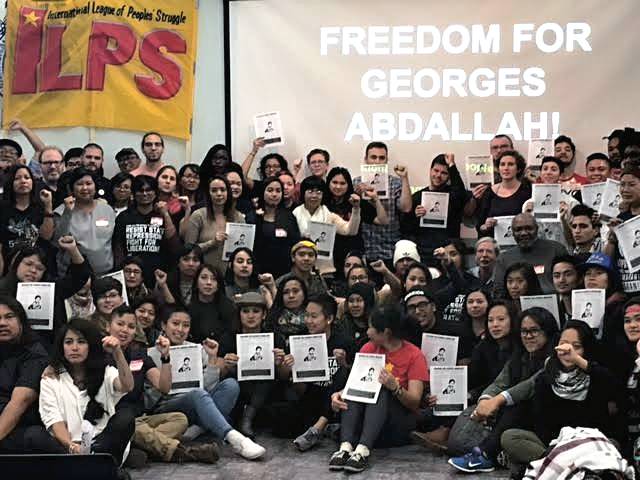 Hundreds of supporters mobilized during an international week of actions to free Georges Ibrahim Abdallah, a Lebanese revolutionary imprisoned by France since Oct. 24, 1984.

Samidoun: Palestinian Prisoner Solidarity Network activists held the first demonstration, a protest outside the French mission to the United Nations on Oct. 14. Officers from the New York Police Department’s “Counterterrorism Bureau” moved quickly to intercept activists when they attempted to march into the building.

In France, Samidoun activists joined a march of more than 400 outside the prison where Abdallah is held in Lannemezan on Oct. 22. Protesters banged on the prison gates with flagpoles and stones, while others lit fireworks to ensure their message of solidarity would breach the prison walls. Samidoun activists also attended a forum in Toulouse.

Protests timed to coincide with the ninth appeal for Abdallah’s freedom were also held across France; in Manchester, England; Magdeburg, Hamburg and Berlin in Germany; Milan and Padua in Italy; Vienna; Thessaloniki and Athens in Greece; Istanbul; Tunis in Tunisia; Beirut; and Gaza and Ramallah.

At Lannemezan, protesters banged on the prison gates with flagpoles and stones, while others lit fireworks to ensure their message of solidarity would breach the prison walls.

In Chicago, participants in a U.S. chapter conference of the International League of Peoples’ Struggle demonstrated in support of Abdallah on Oct. 22.

Meanwhile, groups organized events across France and in Magdeburg and Hamburg in Germany, Milan and Padua in Italy, Vienna, Tunis in Tunisia, Beirut, and Gaza and Ramallah.

Originally a member of the Syrian Social Nationalist Party, Abdallah, now 65, was injured fighting with the Popular Front for the Liberation of Palestine against Israel’s invasion of Lebanon in 1978. Later, France charged, he joined the Lebanese Armed Revolutionary Factions, a group formed to resist Western imperialism and Israeli occupation in Lebanon.

In 1984, French authorities arrested him for possession of a forged passport, then quickly agreed to include his name in a prisoner exchange with LARF the following year.

But Abdallah was never released. Only in 2001 would he learn that one of his attorneys, Jean Paul Mazurier, during the negotiations and a subsequent criminal trial had been a secret agent of the French government, collecting information for its prosecutors to use against him.

‘One element of a wide range of actions’

French prosecutor Pierre Baechlin appealed for a light sentence, telling judges, “I beseech you, I implore you, not to pronounce a sentence of more than 10 years.” (Los Angeles Times, Feb. 28, 1987)

But the court unexpectedly deferred to French attorney Georges Kiejman, who had represented the U.S. government as a “civil plaintiff” to the case and urged a harsh sentence.

In following years, the U.S. government, as well as French and Israeli administrations, intervened to keep Abdallah imprisoned, even after French courts repeatedly ordered his freedom.

From his cell in Lannemezan, Abdallah wrote that his ongoing imprisonment was part of a broader effort to repress liberation struggles.

“In the Zionist jails, in Morocco, from the isolation cells in Turkey to those in Greece, in the Philippines and elsewhere in Europe and around the world, it is always the same,” he said in a statement read outside the prison on Oct. 22.

“Judicial persecution is only one element of a wide range of actions against revolutionary and pre-revolutionary movements.” (samidoun.net, Oct. 23)