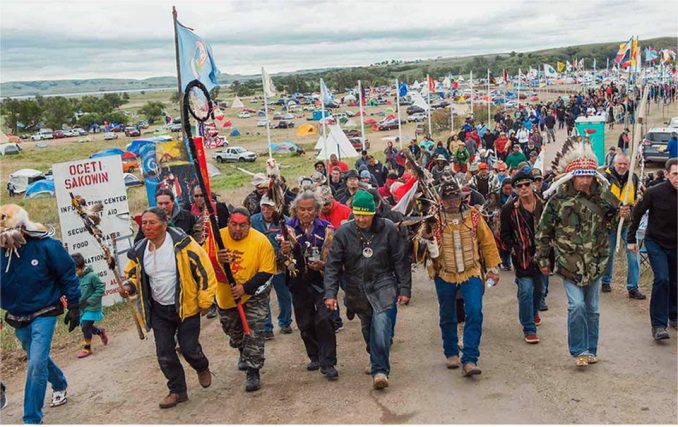 BAYAN-USA, a progressive anti-imperialist alliance of over 20 Filipino organizations, sent a delegation to Standing Rock, N.D., in solidarity with the Sioux Nation in their fight against the Dakota Access Pipeline — and all Indigenous people protecting the water and lands, facing state repression and corporate plunder. The alliance issued a press release on Oct. 20 entitled “From the Philippines to Standing Rock: Water Is Life, Land Is Life, Fight for Self-Determination.” Excerpts are printed here; see full statement at tinyurl.com/gp5o83a/.

“We are here to carry messages of love, hope, solidarity, and resistance from our homeland, the Philippines, which is comprised of dozens of distinct ethnolinguistic tribes and national minorities. We stand with you — the water and land protectors of North Dakota — as the U.S. government continues to prioritize corporate interests over your autonomy, self-determination and ancestral relationship to the land and water.

“We stand with you in resistance against the U.S. military state and its violent dispersal of your people, trumped-up charges, and human rights abuses. … We stand in solidarity, as police deploy military-grade equipment, including armored vehicles, surveillance helicopters, planes, drones, and attack dogs — knowing that this state repression is endemic to U.S. imperialism and the suppression of resistance all over the world. …

“Similar to the 280 Indigenous tribes that have united here at Standing Rock, SANDUGO, an alliance of national minority groups in the Philippines held a protest at the U.S. Embassy in Manila [on Oct. 21] … against U.S. imperialist plunder and militarization, and [is] fighting to defend their ancestral lands and right to self-determination. [Protesters] were violently dispersed with water cannons, teargas, and over 50 people were injured when a police van … [ran] over people repeatedly.

“The brute force from the Philippine military and police to protect the U.S. embassy is in line with maintaining U.S. imperialism over the rights and welfare of the Filipino people. From our homeland in the Philippines to the militarization of communities by Urban Shield, to the killing of Berta Cáceres in Honduras, and to defending Indigenous rights in Standing Rock, we denounce the criminalization of resistance and stand with the protectors of land, water, and human dignity all over the world.

‘Protect our waters and territories; No to Dakota Access Pipeline!’

“The International Indigenous Peoples Movement for Self Determination and Liberation in the Philippines (IPMSDL) stands in unity with the Standing Rock Sioux Dakota and Lakota Indigenous Peoples in asserting their right to protect the waters of their ancestral lands.

“Chairman Dave Archambault II of the Standing Rock Sioux reminds the world that Indigenous Peoples suffer from poverty and environmental sabotage because we are forced to subsidize for-profit corporations through schemes such as [DAPL]. … The U.S. government started the construction of the DAPL without the Free, Prior and Informed Consent (FPIC) of the Standing Rock Sioux Dakota and Lakota Peoples. …

“The IPMSDL strongly urges the U.S. government to respect the rights of Indigenous Peoples within and outside its territories, … immediately halt construction of the destructive [DAPL] and honor the obligations and treaties it has signed and endorsed with respect to Indigenous Peoples and human rights.”