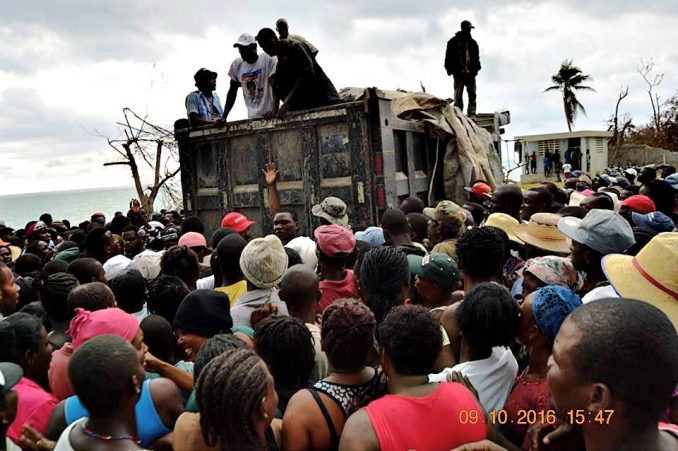 Caravan from Fanmi Lavalas brings aid to survivors who lost everything.

Oct. 10 — The monumental disaster confronting Haiti, the first Black republic in the Western Hemisphere, continues to unfold. Beyond the 1,000 or so Haitians killed by flying debris, floods, collapsed buildings or being swept out to sea by Hurricane Matthew, 13 have already died of cholera in remote, inaccessible areas in southwest Haiti. In Bombardopolis, a very poor town in northwest Haiti, four people have died of cholera since the storm swept through. (Miami Herald, Oct. 9)

Cholera produces severe diarrhea and rapid dehydration. It can kill within hours if untreated. It is spread through contaminated water and has a short incubation period. Rapid outbreaks are common. Cholera was introduced into Haiti by Minustah, the U.N. occupying force, in 2010.

The overall death total is likely to be double or more than what has been reported so far. The Haitian government is using a slow, cumbersome procedure for registering deaths; it only accepts a death caused by Hurricane Matthew if the body is examined by an official. Since large areas of Haiti are still cut off from accessible roads, with some towns like Randel in the southwest inaccessible even by four-wheel drive or motor bike, this produces an obvious undercount.

The Reuters’ estimate, which uses reports from local officials and as of Oct. 10 has set the casualties at 1,000, has been widely accepted by the media in both Haiti and elsewhere.

The U.N. Office for the Coordination of Humanitarian Affairs published an emergency alert Oct. 9, reporting that out of the 2.1 million people affected by the storm, 1.4 million people are in need of assistance. There are 61,537 evacuees in 191 temporary shelters. More than 200,000 houses were severely damaged.

Vast scenes of desolation can be viewed on Flickr photographs posted by Minustah. Farmers’ fields along the coast are filled with salt, silt and gravel. It will take a long time and much work before they are productive again. Banana and mango orchards are now toppled trees, bare sticks at best. It will take long and hungry years before they start bearing fruit again. In many communities — even in major cities like Jérémie and Les Cayes — a large proportion of houses have lost roofs, and some are simply piles of splintered wood.

Cuba is sending a brigade of medical specialists in disasters and epidemics to work alongside the 600 Cuban medical personnel already in Haiti, according to Granma. French television reports that Cuba and Venezuela are both sending food and water.

The U.S. and France, both rich imperialist countries with vast resources — and both responsible for keeping Haiti desperately poor — are sending some aid, but nowhere near what is needed. The U.S. Navy amphibious transport ship Mesa Verde with 700 sailors and support personnel is bringing blankets, kitchen supplies, water and plastic sheeting for temporary roof replacement, enough for 100,000 people. (NPR, Oct. 8) France has sent 25 tons of aid and water purification equipment with 28 soldiers to run it. (www.francetvinfo.fr)

Donations needed — give to Haiti-affiliated groups

As the Red Cross actively solicits donations, many Haitian groups and progressives in the U.S. feel the real character of the Red Cross can be seen in how it operated after the massive 2010 earthquake. Though the Red Cross raised $500 million, it put up only six permanent housing units to replace the tens of thousands destroyed.

Besides the Red Cross with its dubious record, other groups soliciting aid for Haiti on the Internet have solid ties to the Clinton and Gates foundations and should be avoided. The Clinton Foundation received billions in Haitian disaster relief funds after the 2010 earthquake meant for housing and schools — that were never built or were constructed shoddily. The Gates Foundation has been implicated in a Big Pharma scandal over efforts to stop disease caused by lack of access to clean water.

Some in the U.S. have Haitian friends or neighbors who plan on bringing aid to Haiti in the immediate future. But for those who don’t, there are alternatives. The Haiti Emergency Relief Fund is recommended by Haiti Action and has a tax identification for tax deduction purposes. Donate through PayPal online at haitiemergencyrelief.org or send a check to Haiti Emergency Relief Fund, c/o East Bay Sanctuary Covenant, 2362 Bancroft Way, Berkeley, CA 94704.

It is also possible to donate to Haiti through IFCO/Pastors for Peace, which assisted after the 2010 earthquake by sending a delegation of Latin American School of Medicine graduates to serve side-by-side with Cuban doctors, and has continued to provide support and aid to Haiti in the years since. Online at ­ifconews.org click on the donation icon, bottom right, and add a comment that the donation should go to Haiti.

Fanmi Lavalas is also accepting donations through its candidate for president, Dr. Maryse Narcisse. On her French-language web page, marysenarcisse.ht, click on the button on the lower-right corner, “Faire un don,” which links to a PayPal page.

Hurricane Matthew was a terrible catastrophe for Haiti. All progressives should make every effort to avoid it becoming a bonanza for NGO bandit capitalists who made millions-upon-millions when Haiti suffered the shattering 2010 earthquake.