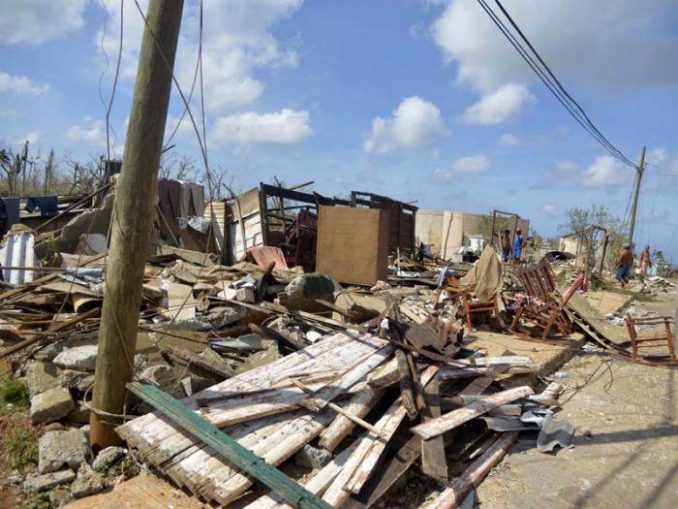 Maisí, a municipality of 29,000 in Guantánamo Province, Cuba, after Hurricane Matthew.

Oct. 10 — Category 4 Hurricane Matthew swept north from Haïti and smashed into the easternmost tip of Cuba’s Guantánamo province on Oct. 4. Photos from the coastal municipality of Baracoa, Cuba’s oldest Spanish colonial settlement dating from 1511, show buildings without roofs, streets clogged with chunks of collapsed walls and other debris.

The violent seas pushed in huge rocks that blocked the roads to the smaller communities of Imias, San Antonio del Sur, Yateras, Cajobabo, Maisí and Moa in neighboring Holguin province. Winds denuded hillsides, removing all trees. High winds and rain destroyed crops. The storm left only 50 feet of the critical 200-foot bridge over the Toa River.

The damage in Baracoa looked catastrophic, but as of Oct. 10, no deaths have been reported on the island. Despite the fact that it still suffers from a U.S.-imposed economic blockade, Cuba’s preparation for Hurricane Matthew vividly demonstrates the superiority of organizing society on socialist principles.

In socialist Cuba, extensive pre-storm preparations aimed at prioritizing the protection of human life and consciously conserving both personal and socialized economic resources. The residents of the affected area were confident they would be secure and would have plenty of support and solidarity both to confront the terrifying storm and rebuild after it passed.

By going door-to-door as well as making announcements from sound trucks, those organizing the evacuation convinced residents of the danger from the approaching hurricane. Then they helped those people at risk to relocate. This personal outreach reinforced the messages Cuban meteorological scientists broadcast on television and radio.

Neighbors inland from the coast welcomed some of the 380,000 evacuees to ride out the storm in their homes, while others went to relatives or shelters. No one was abandoned.

This contrasts with U.S. society, which is based on maximizing profit for the capitalist ruling class. There were 18 deaths in the United States, not including the man police shot on Oct. 5 after he sped out of a South Carolina evacuation checkpoint. 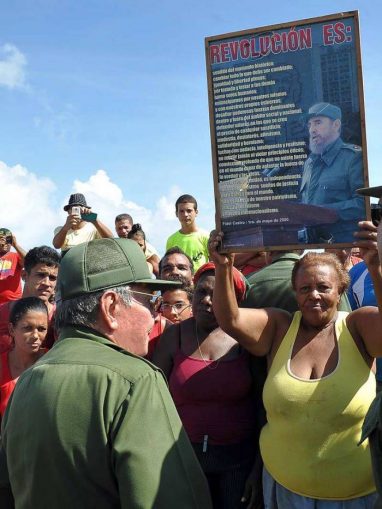 In Ciego de Avila province, some 700 electrical and telecommunication line workers mobilized, bringing equipment and supplies into the hurricane-damaged area. In the aftermath of the storm, the olive-green-clad Revolutionary Armed Forces cleared the impassable highways.

Raul Castro returned again on Oct. 9 to personally meet with the people of Baracoa, observe the damage and reconstruction underway, and evaluate the need for further assistance. The revolutionary government has reduced the price of construction materials by 50 percent for people whose homes were destroyed or damaged by the hurricane.

Omar Cantillo Rodríguez, secretary general of the Cuban Workers Central Union (CTC) in Maisí, said there is much to be done to “re-establish electrical service, communications and other essentials for the population, to provide water and food, these are the priorities at this stage, then we can take on the recovery of each labor collective. The other task these days is to visit the homes of our workers, comfort them and explain to them that what the country is doing to re-establish all those services … is synonymous with love.” (tinyurl.com/j259qbj)

Cuba’s international medical brigades also serve in island nations impacted by Hurricane Matthew. According to an Oct. 5 article in Granma International, the person responsible for the brigades at the Health Ministry confirmed that a hurricane watch had been issued and “close communication has been maintained every six hours with the heads of the medical brigades” in Haiti, the Bahamas and Jamaica.

The health ministry updates the brigade members’ families in Cuba as well as keeping brigade members informed of the impact of the storm and recovery in the affected parts of Cuba.

Dr. Regla Angulo Pardo, director of the health ministry, “noted that every single collaborator has been contacted, all of whom have water, food and fuel reserves for a minimum of 10 days, as well as other supplies such as flashlights, candles, matches and phone credit, in order to remain in contact.”

Cuba reinforced its 648 medical and other professionals serving in Haiti with the deployment of an additional 38 members of the Henry Reeve International Contingent of doctors who specialize in disaster situations and serious epidemics.

At Guantánamo Bay, the U.S. illegally occupies a naval base that is the site of its notorious torture center and prison. The U.S. military evacuated 700 family members and pets to Pensacola, Fla. The 61 remaining prisoners and 2,800 U.S. troops stayed to face the storm.