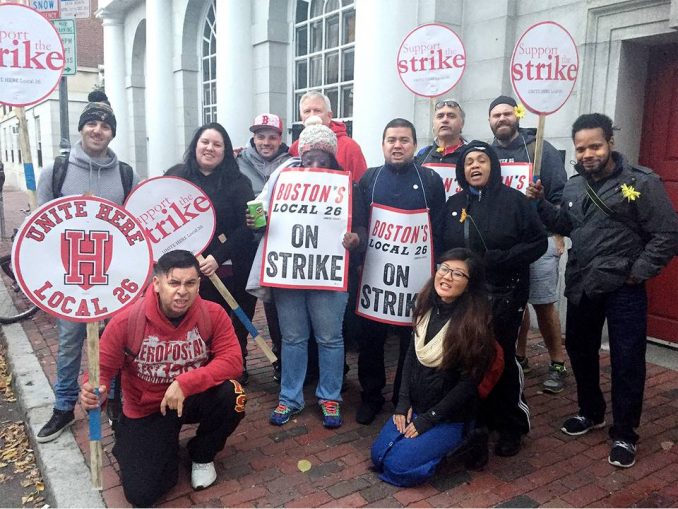 It was 5 a.m. on Oct. 5 and Harvard University Dining Services workers were already marching on a strike picket line, rather than serving up eggs and bacon on a cafeteria breakfast line. The workers, many of them immigrants, half of them people of color, are going toe-to-toe with an elite Ivy League university with a $37.6 billion endowment.

The 750 rank-and-file members of UNITE HERE Local 26 are striking because Harvard has refused to back down from its “take-away” cuts to workers’ retirement and health benefits.

The university has also refused to honor a previous HUDS contract agreement guaranteeing workers a $35,000 minimum yearly wage. Nearly half are earning less than that now. According to the MIT Living Wage Calculator, even that salary is not adequate to support more than a one-person household in Boston. (STAT.com)

In addition, HUDS workers are fighting for the right to establish a task force to combat racism in the kitchens, stop management bias against hiring formerly incarcerated people and permit immigrant workers to take leaves of up to a year with job security.

By midmorning, thousands of workers from 20 dining halls and 40 picket lines, along with supporters, converged and marched into Harvard Square chanting, “Hey, Harvard, you can’t hide! We can see your greedy side!”

The next day, Oct. 6, close to a thousand workers and allies marched again, this time through Harvard Yard in a half-mile trek, banging drums and roaring chants so that even the remotest realms of Harvard’s ivory towers shook with the unstoppable surge. They were joined by Massachusetts AFL-CIO President Steven Tolman. On Oct. 8, HUDS workers and supporters marched and rallied again at the Harvard/Cornell football game.

Local 26 Chief Steward Ed Childs told Workers World, “We aren’t budging!” on demands protecting the minimum yearly wage, retirement and health benefits. He stressed that increased health care premiums and higher co-pays would be particularly devastating for the dining hall workers, who get laid off three months every summer, but as “seasonal educational workers” are not allowed to collect unemployment insurance.

Childs emphasized that the privatized health care system was in failure mode when a multibillion-dollar institution refuses to supply adequate and affordable health care to its workers.

At one of the rallies, a HUDS worker with Type 2 diabetes said she has a hard time, even now, affording her insulin and testing supplies. If her insurance goes up, she could suffer kidney failure or a heart attack without needed medications.

Harvard Medical School students backed up the workers In a StatNews op-ed, saying the university’s attack on workers’ health insurance is a matter of life and death: “As physicians in training, we cannot stand by as the world’s richest university forces its most vulnerable employees to choose between dinner and a doctor’s visit.”

A member of the Racial Justice Coalition at Harvard Medical School, Darshali Vyas, told the press, “We now also know that more than half of HUDS workers identify as people of color — a level of diversity not reflected elsewhere at the University — and that many of these workers represent minority and immigrant families living in Boston. Protecting their access to affordable health-care coverage is intimately tied to racial justice.”

“The cuts proposed by Harvard are anti-LGBTQ,” asserted Ted Waechter in his article, “The HUDS Strike Is So Gay,” in the student Crimson newspaper. He explained: “The proposed co-pay increases would devastate queer and trans workers in particular. When we make healthcare unaffordable, we keep queer and trans people from accessing gender-affirming treatments, like hormone therapy and gender-confirmation surgery.”

Local 26 HUDS workers fought for and won one of the country’s first sexual orientation nondiscrimination provisions, and are currently fighting for provisions based on gender identity.

Workers at Harvard are up against an “education” corporation that is part of big business profit making and the 1%, in an interlocking relationship with the military-industrial complex and big banks like Goldman-Sachs, Bank of America and Citigroup. The governing body of the university is literally Harvard Corporation — “the oldest corporation in the Western Hemisphere,” dating back to the mid-17th century. (harvard.edu)

To do battle with this behemoth, the rank-and-file dining hall workers have put together a town-gown-­community coalition that is a powerful model for how to win. Coalition members endorsing and organizing for the strike include the under­graduate Harvard School of Public Health, the Student Labor Action Movement, the Undergraduate Council and the Editorial Board of the famed student newspaper, the Crimson. Faculty and non­union employees are supporting the strike, as they’re also having their health benefits cut.

Unity also comes from Harvard Law School students, who protested university racism by occupying their own college in February. Both the Cambridge City Council and the Boston Homeless Solidarity Committee have endorsed the strike.

And the dining hall workers have built wide solidarity over many years, from their opposition to South African apartheid to their support for Indigenous and Palestinian struggles.

This strike forcefully raises the class question: How can workers survive a capitalism that will not pay them a wage that they and their families can survive on, and that will not provide adequate health care — a matter of life or death?

In socialist Cuba, medical care is completely free to all citizens and has no links to profit. In Cuba there is, in fact, no need for “health insurance” or for having to pay out money monthly to have a safety net against for-profit medical or Big Pharma bills.

Harvard University is rich enough to provide affordable health care to all its workers, but it will not do so without a fight. It will not because, like Verizon or Veolia or any other capitalist corporation, it needs profits to survive. Paying health care or other benefits to workers is not profitable. As capitalism decays, corporations and banks are employing fewer workers to do more work at less wages with minimal or no benefits.

HUDS workers have drawn the line.

The strike by the Harvard dining hall workers in their struggle for health care, for adequate pay, for what they need to survive is a new heroic battle in the centuries-old struggle of workers to take back our lives and our work.