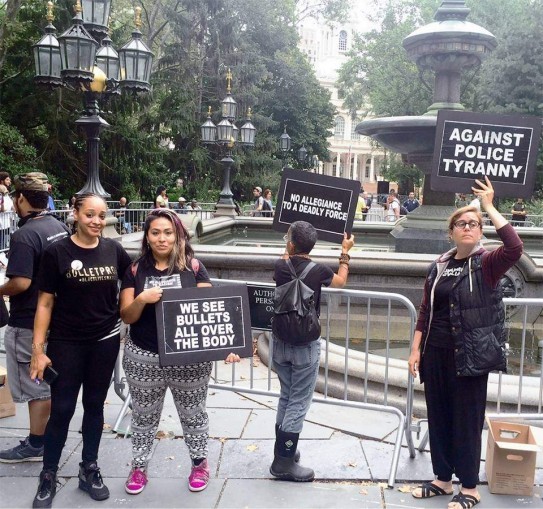 A comprehensive, up-to-date 22-page report by the U.N. Working Group of Experts on People of African Descent was released Aug. 18. It offers an overview of slavery, Jim Crow racism, lynching, the Civil Rights Movement and other historical and current events. It does not mince words. (tinyurl.com/gth8o8l)

The report makes a stirring call for reparations for the African- American community: “[T]he legacy of colonial history, enslavement, racial subordination and segregation, racial terrorism and racial inequality in the United States remains a serious challenge, as there has been no real commitment to reparations and to truth and reconciliation for people of African descent.”

It stresses, “Contemporary police killings and the trauma that they create are reminiscent of the past racial terror of lynching. Impunity for state violence has resulted in the current human rights crisis and must be addressed as a matter of urgency.”

The document hails Black Lives Matter activists and their ongoing struggle, saying: “The Working Group is deeply concerned at the alarming levels of police brutality and excessive use of lethal force by law enforcement officials, committed with impunity against people of African descent in the United States.”

Police killings: ‘tip of the iceberg’

Moreover, “In addition to the … well-known cases of killings of unarmed African Americans … Eric Garner, Michael Brown, Tamir Rice, Walter Scott, Freddie Gray and Laquan McDonald — [we] received information about many other similar cases. … Killings of unarmed African Americans by the police [are] only the tip of the iceberg in what is a pervasive racial bias in the justice system.”

The panel analyzed the mass incarceration of Black youth, racist use of the death penalty, role of police in the classroom who attack Black children, outrageous use of solitary confinement in prison and denial of effective medical treatment for hepatitis C infections.

As for education, “The Working Group is concerned by the underfunding and closure of schools, particularly those in poor neighborhoods with significant African-American populations. In school curricula, the historical facts concerning … colonization, the trans-Atlantic trade in Africans, and enslavement, which have been crucial to the organization of contemporary American society, are not sufficiently covered in all schools.” In some states, curricula “fail to address adequately the root causes of racial inequality and injustice. This contributes to the structural invisibility of African Americans.”

The Flint water crisis, huge wealth disparity, environmental racism and Black maternal deaths are also addressed in the document Activists working to effect change would find it most informative.

Of course, presidential candidates Hillary Clinton and Donald Trump have not seriously addressed the issues raised here. Neither supports the call for reparations for African-American and other oppressed communities. Nor did Bernie Sanders, despite the urging of prominent African-Americans, such as journalist Ta-Nehisi Coates who authored an eloquent call for reparations in the Atlantic magazine. (tinyurl.com/nopprgt)

In contrast, Monica Moorehead and Lamont Lilly, Workers World Party’s presidential and vice presidential candidates, put reparations for the oppressed as the number-one issue in their campaign program.