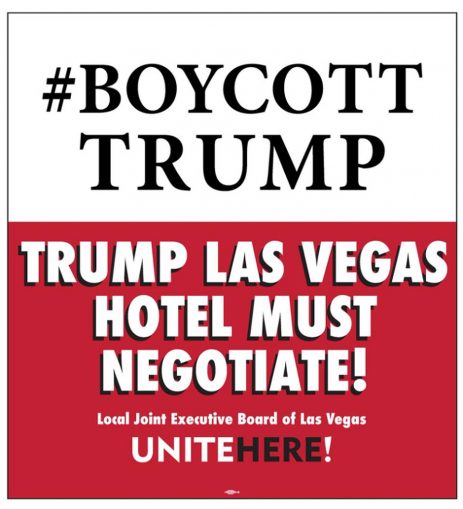 Culinary Workers Local 226 took a bold step in their drive for a union contract at Trump International Hotel in Las Vegas on Sept. 27. On behalf of the 500 workers, mostly Spanish-speaking immigrants, CWU Local 226 called a national boycott of all facilities that Trump “owns, has invested in, or has partnered with,” said CWU spokeswoman Bethany Khan. “Other unions can respect [the] boycott and not deliver goods or pass the picket line.” The AFL-CIO supports the boycott. (Huffington Post, Sept. 27)

The cooks, housekeepers, bellhops, cocktail servers and other workers voted to join UNITE HERE’s Culinary Workers Local 226 and Bartenders Local 165 last December. But Trump management appealed the National Labor Relations Board’s certification of the union, and the board has yet to issue a final ruling.

The NLRB general counsel filed charges against the hotel after finding merit in the union’s claim that management intimidated and retaliated against pro-union workers during the organizing campaign. But the full board hasn’t ruled on that, either. WW wants to know: Why is the NLRB twiddling its thumbs?

For lists of Trump-related properties, visit “Boycott Trump” on arbiternews.com and “Boycott Trump List of of [sic] Companies to Refuse to Support” on Facebook.

The 4,800 registered nurses at five Allina Health hospitals in the St. Paul, Minn., area, represented by the Minnesota Nurses Association, are fighting for a fair contract. But the highly profitable nonprofit hospital system insists on shifting health care increases to the nurses and has ignored appeals for training to deal with workplace violence and for a fair nurse-to-patient ratio. So the MNA held a one-week strike in June. When Allina still refused to budge, the MNA called an unfair labor practices strike on Labor Day.

Over the last month, the nurses have picketed, rallied, marched and galvanized hundreds of supporters to petition Allina for a fair contract. On Sept. 25, they snarled traffic in front of a Minneapolis hotel during the annual General Mills shareholders meeting. By spotlighting the role of GM Executive Vice President John Church, who chairs the Allina board, they hoped to pressure the hospital system to resume negotiations.

A federal mediator brought Allina back to the table on Sept. 25. Despite 40 hours of negotiations over three days, Allina was intent on “nickel and diming the nurses in a zero-sum game that made it impossible for the negotiating team to reach a tentative agreement,” said MNA Executive Director Rose Roach at a Sept. 30 news conference. When the nurses voted on the agreement on Oct. 3, they sent a “resounding” no to Allina. The strike continues. (mprnews.com, Oct. 3)

Candy makers: ‘No pension, no Peeps!’

According to Debbie Harden, a 16-year package handler, the workers waited until Easter and Valentine’s Day orders were in to initiate the strike: “We held out, because it kind of hits them the hardest. They need us more than they think.” (mcall.com, Sept. 7) But after the company filed a suit charging Local 6 with violating the contract by calling the strike — which Local 6 disputes — the workers returned to work Sept. 30, citing progress on the contact. Talks will continue Oct. 13. (AP, Sept. 30)

According to www1.nyc.gov, the city’s official website, “Across the country, nearly one in five Americans has an unstable work schedule and about 40 percent of early career workers, defined as workers aged 26 to 32, have less than one week advance notice of their schedules.” (Sept. 15)

The law would be the first pro-worker legislation regulating the U.S. fast food industry. Adding the need for fair scheduling only bolsters workers’ demands for $15 an hour and a union.