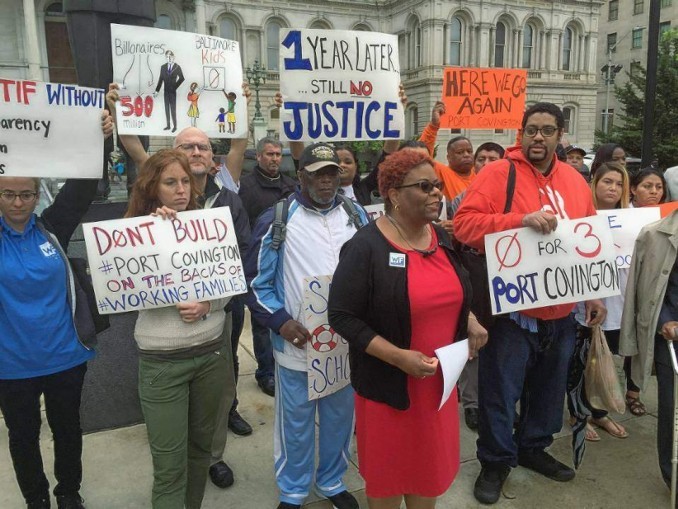 Once again, as happened with the Inner Harbor in Baltimore, real estate moguls and developers are pressing for millions of dollars of Baltimore residents’ money in order to construct a white-privilege community. Meanwhile, impoverished East and West Baltimore continue to suffer from decay and disenfranchisement.

Especially after last April’s uprising against the police murder of Freddie Gray, this is both an insult to his memory and a slap in the face to Baltimore’s Black community.

Kevin Plank, the multibillionaire owner of Under Armour, a sportswear conglomerate, and his parent real estate company, Sagamore Development, have asked the city to underwrite municipal bonds in order to build and develop a “mini-city” enclave of waterfront parks plus new offices for Under Armour, middle- to upper-class housing, and other industries owned by Plank. This $600 million in tax increment financing, which means “payment in lieu of taxes,” from the city is the largest such request in U.S. history.

Unfortunately, Mayor Stephanie Rawlings-Blake and the majority of the City Council have endorsed this project, which will continue the legacy of segregation and blight while effectively denying access to these areas for the oppressed. It will criminalize their very presence, as has happened in Harbor Place, another municipal brainchild that was supposed to “redevelop” the city and bring jobs for the unemployed. Instead, it resulted in minimum-wage jobs along with the development of more condos and residential units for the wealthy.

Most community leaders have called this nothing but corporate welfare, comparable to the building, 50 years ago, of the Charles Center, which promised to bring a thriving downtown, surrounded by robust affordable housing and parks. However, that dream became a nightmare of increased unemployment, closed businesses, and lack of accessibility or affordability for Black people.

The Maryland American Civil Liberties Union and Public Justice Center say the following in their “Comments on the Port Covington Master Plan”: “We should show that Baltimore has learned a hard lesson: that the existence of ‘two Baltimores’ — one empowered, wealthy and thriving, the other still redlined and marginalized — is no longer sustainable. … As it stands now, the Port Covington Master Plan is a prime example of structural inequality on a massive scale — and of the same old waterfront-focused economic development approach that hasn’t worked to reverse Baltimore’s decline, and will contribute in fact to the disinvestment in other neighborhoods. While ‘big and bold,’ this vision is decidedly limited to the old school of trickle-down economic development.”

By far the most pressing issue in this whole city-financed project is the fight for affordable housing for all working people and the oppressed. The project’s many opponents include the ACLU; Maryland Working Families; the People’s Power Assembly; the Maryland Consumer Rights Coalition; the American Federation of State, County and Municipal Employees; UNITE HERE Local 7; City Advocates for the Homeless; and the Baltimore Chapter of the Southern Christian Leadership Conference, led by the Rev. C.D. Witherspoon.

At a tense City Hall meeting of more than 100 people on July 27, advocates for the poor and oppressed were vocal in their condemnation of the “deal” between the city and these capitalist parasites. Jon Laria, a spokesperson for Sagamore, arrogantly asserted that “I am not going to sit here — and I am not going to ask Sagamore to sit here — if there is booing and jeering back and forth.”

Laria and his gang of lawyers and public relations people, as well as Sagamore’s security goons, were reacting to a tidal wave of harsh criticism from the crowd. One person summed it up by yelling, “A poor Black city supporting kayak and boat slips!?” Laria responded, “I am fairly sure that African Americans kayak too.” Rev. C.D. Witherspoon of the SCLC then shouted in response to this racist and paternalistic comment, “Working-class people in the city will never benefit from these amenities. This is for rich white people! You want it, pay for it yourself!”

City Council President Jack Young gave his wholehearted support to this giveaway. Sharon Black, who is running an independent socialist campaign, is challenging Young for the City Council president’s seat. She and Andre Powell, a write-in candidate for mayor, have been vocal as well as active in denouncing the city government’s giveaways to big business interests.

An article in the Baltimore Sun exposed Plank’s “promise” that affordable housing units will be built: “Critics contend the affordable housing agreement is too weak. It requires 10 percent of Port Covington’s affordable housing units be built for people who make less than $26,000, but it contains what the critics call a ‘loophole’ that allows the developer to pay money into an exclusionary housing fund instead of building the units. The developers do not have to build the housing for the poor unless they receive federal low-income housing credits.” (Sept. 19)

Baltimore city schools, some of which have already been closed, will be further victimized by this robbery. It will divert $315 million of state aid from the school system until the bonds are repaid. There is basically no enforcement code in Sagamore’s promises.

It’s all just another example of “capitalism at a dead end.”