The struggle at Standing Rock, N.D., led by the Oceti Sakowin (Seven Council Fires of the Great Sioux Nation), has brought together hundreds of Indigenous nations, thousands of Indigenous people and many supporters to block the construction of the Dakota Access Pipeline (DAPL). They are united in the fight against corporate pollution of water, protection of sacred Native sites and defense of Indigenous sovereignty.

Protests in solidarity with this historic and crucial struggle have occurred in various cities in the U.S. and internationally. Here are reports about some of them.

Over 150 activists from Detroit and around Michigan turned out on Sept. 12 to demonstrate solidarity with Standing Rock and oppose Big Oil’s destruction of the planet. The evening “light protest,” called by the Detroit Light Brigade, the Detroit Coalition Against Tar Sands and the Blood Oil Campaign Against Marathon, was held outside a Marathon Oil refinery in southwest Detroit. Marathon’s airborne toxins have made its 48217 ZIP code area the most polluted part of Michigan.

Illuminated letters spelled out the message “No DAPL, Honor the Treaties, Stop ETP,” while the Light Brigade’s “bat light” flashed “Stop the desecration — #RezpectOurWater” on the side of a building. ETP refers to Energy Transfer Partners, whose Bakken Project includes the DAPL. ETP recently sold a 37.5 percent share in the Bakken Project to Marathon and Enbridge Energy Partners.

Organizers of this action have demonstrated previously against Marathon and Enbridge. Enbridge caused a catastrophic pipeline break that contaminated a portion of Michigan’s Kalamazoo River. It also operates the Line 5 pipeline that runs under Lake Superior. Environmental activists and Indigenous peoples in Michigan have protested with canoes and kayaks to demand the shut-down of Line 5, whose aging pipes pose a danger to the Great Lakes, the largest group of freshwater lakes on Earth.

The protest took over the street and blocked traffic, with participants chanting “Whose streets? Our streets! Whose water? Our water!” The slogan “Water is Life” resonates with southeast Michigan, which still feels the impact of the water contamination crisis in Flint and the thousands of water shutoffs in Detroit.

Flint activists have posted about the Standing Rock struggle on their Facebook pages and Black Lives Matter Detroit pledged solidarity. The Moratorium Now! Coalition to Stop Foreclosures, Evictions and Utility Shutoffs ended its weekly Monday meeting early to send a delegation to the action. 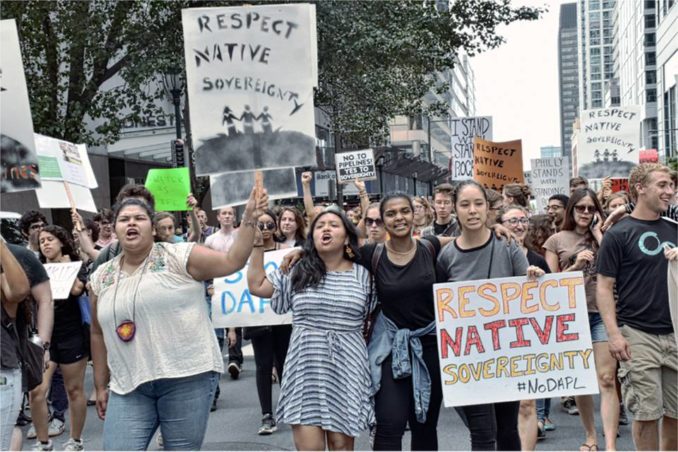 Around 500 people gathered in Philadelphia on Sept. 17 for a solidarity rally with the Indigenous peoples challenging the DAPL at Standing Rock. The rally, which gathered at City Hall, brought together Native peoples from the Philadelphia area, along with a diverse array of mainly young activists from the Black Lives Matter movement, the low-wage workers struggle, the immigrant rights movement and the broader environmental justice movement.

Many demonstrators came from area unions, including the Transit Workers Union, the American Postal Workers Union and the National Association of Letter Carriers. Members of Working Educators, a progressive grouping in the Philadelphia Federation of Teachers, attended. Palestine solidarity activists participated with signs linking Indigenous peoples everywhere who are fighting against the colonial and corporate interests trying to steal their lands.

The rally was followed by a spirited march through Center City, where it received broad support from people on the streets.

In a separate action, seven people, including members of the Philadelphia Student Union, were arrested for occupying the lobby of TD Bank, a pipeline funder.

Over 500 Native people and their supporters marched in downtown Seattle on Sept. 16 behind a huge banner which read “Stand with Standing Rock!  Water is Life! #NoDAPL!”

The march was led by drummers who continued drumming throughout the rally.  Representatives of Northwest Native nations and Indigenous peoples from Alaska, Hawaii, California and the Great Plains attended as well as supporters. Many protesters had previously traveled to Standing Rock.

Rally chairperson Millie Kennedy, Alaska Native and member of the Tsimshian Nation, greeted demonstrators at Westlake Center.  Matt Remle, who is from Standing Rock, announced the demonstration was being live-streamed to the encampment there. Remle stressed that Indigenous peoples’ struggles are central to the global movement to save the planet: “Native peoples are 4 percent of the world’s people, but we’re protecting 85 percent of the world’s biodiversity.”

Quinault Nation President Fawn Sharp told the rally, “When another country can take unilateral action against our land and resources, that is a political injustice and an assault on all of us.”

Northwest Sacred Water Canoe Family members expressed their pride at rowing 40 miles down the Missouri River and then being welcomed by the Standing Rock gathering.

Joe Williams, of the Swinomish Nation, emphasized, “This is not only a Native fight. This is a fight for everybody. We all need to come together and join this fight.”

For three consecutive weeks, Northwest Native nations have marched in Seattle demanding a halt to construction of the DAPL. Other actions in the state included a protest at Michels Corporation, a DAPL contractor in Kirkland, Wash.