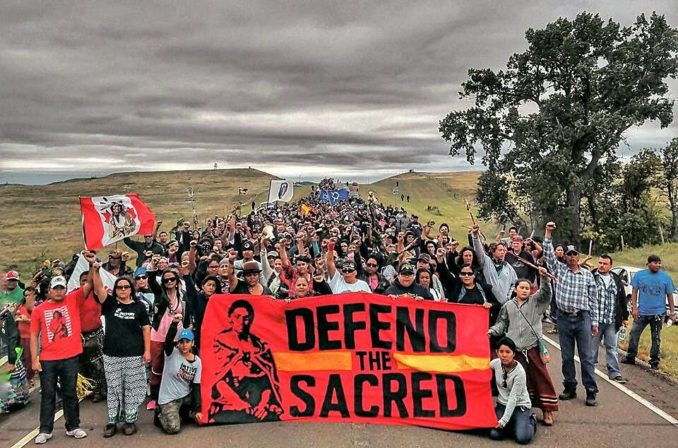 Under Indigenous leadership, the determination of thousands who have gathered at Standing Rock is having a profound impact in exposing the environmental destruction caused by the mad profit drive of the oil industry.

Oil and gas corporations, the banks standing behind them, and the U.S. government that supports capitalist exploitation have been complicit in suppressing the immediate and long-term consequences of oil fracking, and the construction of a lethal network of porous pipelines. These pipelines have a history of rupturing and polluting streams, rivers and underground aquifers.

The Standing Rock Sioux and potentially 17 million others are threatened by the Dakota Access Pipeline route, a 1,170-mile oil pipeline that would run from North Dakota to Illinois. Data on oil and gas pipeline safety in the U.S. confirms a history of spills, contamination, injuries and deaths.

Since 1986, there have been nearly 8,000 incidents, resulting in more than 500 immediate deaths, more than 2,300 injuries and nearly $7 billion in damage. Oil is by far the most commonly spilled substance, followed by natural gas, gasoline, diesel, propane and jet fuel.

Pipeline accidents have dumped an average of 76,000 barrels per year or more than 3 million gallons. This is equivalent to 200 barrels of oil pouring into the land and water every day for 30 years. (Center for Biological Diversity)

Reasons for pipeline spills include damage during excavation operations, metal failure, improper operation and corrosion. In most cases, cleanup is only partially successful, leaving tens of thousands of barrels of oil on land or in water.

According to an Associated Press analysis of federal data: “As U.S oil production has soared, so has the number of pipeline accidents. Since 2009, the annual number of significant accidents on oil pipelines has shot up almost 60 percent, matching the rise in U.S. crude oil production.” (AP, May 23, 2015)

In the last five years, 423 oil trains have crashed or spilled oil in the U.S., with $45 million in damages. A train derailment and explosion of oil from the Bakken fields of North Dakota totally destroyed the Quebec community of Lac-Megantic in 2013. Forty-six people died in the flames. In West Virginia, oil burned for days after 26 tanker cars derailed and 19 caught on fire in 2015. Oil spilled into a nearby river. Damages totaled more than $23 million.

These catastrophes gave rise to a movement challenging all transport of highly flammable oil by rail. But the oil industry simultaneously pushes for both pipelines and increased crude-by-rail, in an attempt to pit movements, struggling against each method, against each other.

Although pipelines spill three times as much crude oil as oil trains, all these forms of transport — pipelines, rail and truck — are dangerous and ruinous to the environment.

What is happening now at Standing Rock challenges us to look at the long-term damage the entire oil industry is wreaking on the earth and the global climate. Sustainable forms of energy, based on the sun, wind and water, are increasingly viable. Calculations based only on immediate profit are both criminal and shortsighted.

Pipelines are by far the cheapest way to move gasoline or oil. Transport by rail and truck costs about $30 a barrel more. The huge difference in profit margins, not the danger of transport by rail, drives pipeline construction.

At the height of the Standing Rock struggle, corporate media have been almost totally silent as two states, Alabama and Georgia, declared a state of emergency due to a Sept. 9 pipeline spill in Shelby County, Ala. (NationofChange.org)

The ruptured fuel line carries refined gasoline from Houston to the East Coast. By Sept. 12, the break had leaked over 250,000 gallons of gasoline.

Capitalism is driven to maximize profit. Every decision is based not on human need nor on environmental safety nor even on the future of the planet. Corporate decisions are based on what is most immediately profitable.

Through the 1950s and into the early 1960s, the U.S. government seized hundreds of thousands of acres of land remaining to Indigenous nations, in an aggressive plan to build dams along the Missouri River Basin.

One was the Oahe Dam, creating the Oahe Lake, in the area that is now being defended against DAPL by the Oceti Sakowin (the Great Sioux Nation). According to Native American Netroots, that dam destroyed more Native land than any other public works project in U.S. history by flooding 90 percent of the timber and bottomland of the Standing Rock and Cheyenne River nations.

Their villages and towns were destroyed for agribusiness irrigation, and for a big-business power plant to supply electricity to much of the north-central U.S.

Among the Oceti Sakowin activists now stopping the DAPL pipeline, there are people who remember their land before its expropriation and flooding for Big Energy profits.

Though further impoverished by the loss of their lands, the Standing Rock Sioux have resisted granting applications for oil drilling or pipelines. Other impoverished Indigenous nations have felt forced to turn to the profit-promising made by Big Energy oil drilling, fracking and coal mining corporations in order to build their tribal economies.

Dallas Goldtooth, a Mdewakanton Dakota and Dene organizer for the Indigenous Environmental Network, points out that the Standing Rock resistance is creating solidarity against environmental devastation. He describes the 189 resolutions or solidarity statements with Standing Rock from Native nations as “amazing, historic. … A lot of tribes that are heavily dependent on resource extraction have also come out in support. Three Affiliated Tribes — 30 percent of the Bakken oil shale is under their lands. … The Navajo Nation … heavily dependent on coal. The Crow Nation … all coal. All sent statements of solidarity. … It opens up a door for more organizing.” (yesmagazine.org)

Sara Flounders, co-director of the International Action Center, was part of a recent Workers World delegation to Standing Rock.