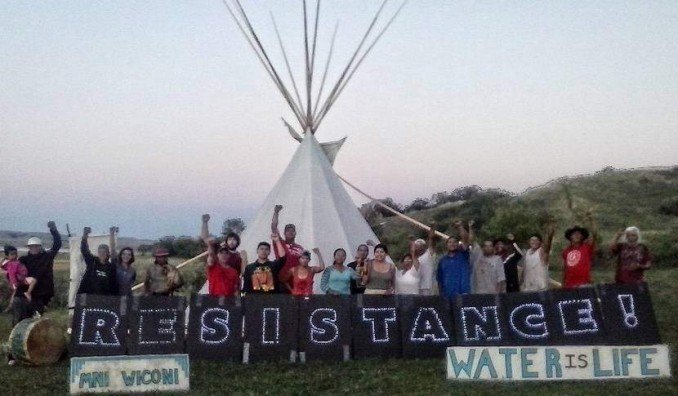 The mainstream media would have most of us believe that the current struggle at Standing Rock, N.D., is all about clean water — that its only focus is stopping the Dakota Access Pipeline (DAPL) from running through Indigenous reservation land. And, yes, it is about these things. But while such a narrative may create “hot headlines,” it fails to capture the full truth and essence of what‘s really going on there.

On Sept. 9 through Sept. 12, our Workers World Party delegation gathered with 8,000 others in answer to the national call to mobilize for support. I realized that Standing Rock is actually an entire race of peoples’ fight for sovereignty and complete liberation, a fight for the right to exist without forced displacement and assimilation.

Shortly after our flight into Bismarck, N.D., we went to the state Capitol building, where I began to realize that this was much bigger than just a fight for water. Is water a central component to this struggle? Yes, yes, it is. But what I shortly realized, as local members of the Indigenous community began to gather, and as school-aged Native youth began to march down the street in the rain, is that the significance of the developments at Standing Rock was nothing short of historically majestic. This “local protest” had become monumental.

Representatives of Indigenous Nations began pouring into Bismarck from all over the country and from other countries. In spite of the rain, more and more people just kept coming. A protest had become a reunion, a reunion even for some who had never spoken to each other, a reunion many thought would never happen again. The struggle for water had performed a material miracle. Resistance had created both unity and mass consciousness.

It was Friday and we had just arrived. So much was unfolding, and we hadn’t even made it to the official campground at Standing Rock yet. We had merely decided to support a Bismarck protest we heard about before traveling to Standing Rock, getting settled and set up for the evening. After the protest, we finally arrived at the Main Camp at Standing Rock late on Friday afternoon, with plenty of time before dark. We debated for a half hour about where to pitch our tent, and finally found a spot.

Word broke during camp that evening that the Obama administration and the U.S. government had decided to temporarily “halt” further construction of DAPL in the immediate Lake Oahe area by Standing Rock. But certainly the overall DAPL project had not been canceled in North Dakota or elsewhere.

Indigenous Nations came from all over: Ontario (Canada), Hawaii, Ecuador, Jamaica, Alaska, Massachusetts, California. There were elders and small children, women and men.

Main Camp organizers noted that over 260 Nations had gathered, the largest of any such gathering since Wounded Knee in 1973. Morale was high, but people were still leery of the government. After 500 years of colonial lies, false promises and broken treaties, many of the elders had seen this story before. They reminded the media and informed the various nations to stay vigilant.

As organizer and Standing Rock Sioux elder Phyllis Young stated: “Our freedom is in our DNA. Our culture is bigger than the U.S. Constitution. When one nation’s rights are violated, we are all violated.” On the subject of false treaties, Young reminded us that “these agreements are problematic because they do not recognize our sovereignty. They have not kept their promises.”

Our time and efforts were divided between four different encampments. If you’re coming from Bismarck, the first encampment you’ll approach is “The Frontline.”  This was the site where private security firm G4S sprayed the Water Protectors with pepper spray and prompted dogs to attack women and defenseless children.

Just off the road, the camp is small in size, but well-guarded and protected. A few yards behind the company’s barbed wire gates, you can actually see the uprooted soil, courtesy of U.S. Army Engineers and private construction vehicles. North Dakota later issued a misdemeanor warrant for Democracy Now host, Amy Goodman, for simply documenting what happened there.

Main Camp is where the masses reside — a 20-acre plot of flatland surrounded by sacred burial space, “Facebook Hill” (where people can pick up enough cell service to post on social media), and scattered marsh remnants of the Missouri and Cannonball rivers. Main Camp is where most of the socializing and public assemblies took place.

Though much smaller, Sacred Stone is probably the camp most recognized by name. Sacred Stone is the location of the initial resistance, dating back to the spring of this year.

Last, but certainly not least, is Red Warrior Camp — the heavily targeted and radical youth encampment located just between Main Camp and Sacred Stone. Red Warrior Camp has really inspired and galvanized the young people. We were honored to formally meet with them the day before we left. In return, we left the Red Warrior Camp much of our camping equipment and the supplies that we could spare. Their spokesperson, Cody Hall, was arrested during the time our delegation was in ND.

Main Camp, which was where we stayed, was highly organized and well laid out. Tents and tipis were sporadically spaced at the site of your own choosing. The kitchen, dry storage and main assembly circle were all conjoined. While the main circle was open-air seating, all other stations were well constructed for the harsh conditions of North Dakota.

There was a medical room and camp infirmary as well as a freedom school and welcome center. There was the donation center and legal support station. There were safety teams and ground sanitation. Several thousand of us were fed, sheltered and provided for, every day. There were many participants who came on faith and with very few resources. The ingenuity required to seamlessly feed three meals a day to thousands is no small feat.

In addition to the elements of traditional dance and clothing and tribal flags, there was also a special emphasis placed on remembrance — remembrance of the old names and Native languages that so many still fight to preserve, remembrance of the past freedom fighters and political prisoners. Elders and youth alike noted the important contributions of Sitting Bull and Leonard Peltier, Russell Means and John Trudell.

With over 260 Indigenous nations represented, were there a few internal differences? Yes, of course. But there was also a celebration of those differences, a moment of material magic that so many were able to come together and build on their commonalities. Not only was there a collective sense of pride, urgency and organization, a collective memory was etched in communal stone, passed down to the next Seven Generations.

“We want our grandchildren to see this, to be here and touch the land,” said Chief Arvol Looking Horse. “I remember my grandmother teaching me about Wounded Knee, and we have to pass this down. The story of today.”

It was so important that the youth and children were able to witness such a display of unity. This is the moment that they too, will pass down to their children — the preservation of culture, history, tradition — the interconnection of water, soil, air, life — the importance of respecting the land, animals and fellow human beings.

Water is life, not a business

Standing Rock is more than just a fight to stop construction vehicles from digging up the soil to lay pipes.  What this is really about is the preservation of the Indigenous way of life — a way of life that walks in accord with the natural elements and resources around them — a way of life that not only honors each other but also the Earth, the land, the water. It is a way of life that deeply respects the air we breathe, the sun, the soil — a way of life that seeks to live in unity with these elements, not to somehow profit from them. Water is life, not a business.

This struggle is about supporting the right to be free from corporate greed and white supremacist domination, the right for Indigenous people to determine their own destiny, the right to exist without the U.S. government meddling in the internal affairs of Native Nations and exploiting their differences to divide and conquer.

What we saw and heard at Standing Rock were the effects of colonialism continuing to play out, 500 years later. Some Indigenous people have survived through surface-level assimilation, adopting more Eurocentric names, styles of dress and religious practices. Others have refused to assimilate and remain rooted in the old ways. Some favor prayer through action; others embrace a more militant form of resistance by any means necessary.

The only negative aspect of our entire stay was state repression. Drones, helicopters and aerial surveillance were a constant. The road checkpoints, encampment warrants and threat of arrests were very real. Supporters and organizers were quite conscious of the repressive character of the state, yet refused to allow that presence to dampen the occasion. But I guess that’s to be expected when you’re pursuing liberation.

Nearly 70 people have been arrested for simply standing in the way of DAPL, but many more are springing up to take their places. When we are talking about #NoDAPL, it’s really important that we demand that all the charges be dropped.

Much thanks to Standing Rock for allowing us to be there! Long live all the Indigenous Nations! Free Leonard Peltier!