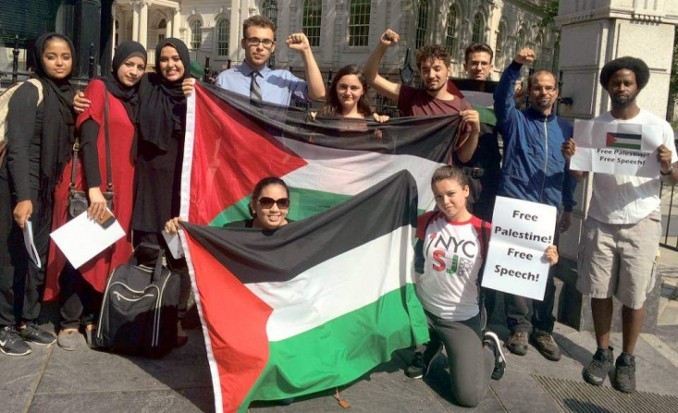 Outside City Hall after disruption of anti-Palestinian hearing.

Shouts of “Zionism is racism!” and “Free Palestine!” rang through New York City Hall on Sept. 8 as guards expelled dozens of activists for repeatedly interrupting a racist, anti-Palestinian hearing staged by the City Council’s Committee on Contracts.

The disruption, which brought proceedings to a near halt for over an hour, followed a press conference on the City Hall steps protesting a resolution “condemning all efforts to delegitimize the State of Israel and the global movement to boycott, divest from, and sanction the people of Israel.”

If the measure’s 34 co-sponsors hoped it would show the city’s support for the Zionist state of Israel and its racist policies against Palestinians, they could not have miscalculated more. Instead, the resolution brought together Palestinian and solidarity activists, along with civil liberties advocates, religious agencies, university departments and other supporters of free speech, in a show of force the Council may not soon forget.

“What New Yorkers should be very concerned about is not only that their representatives are organizing an effort to impinge on their constituents’ right to free speech, free thought and association, but that they’re doing so at the behest of a government currently being investigated for genocide, war crimes and apartheid,” said Lamis Deek, a human rights attorney and member of Al-Awda New York.

Others found it particularly noxious, at a time of rising anti-Muslim violence, for Committee on Contacts Chair Helen Rosenthal to fête speakers from Zionist groups like the Jewish Community Relations Council and the Lawfare Project, whose “testimony” trafficked in grotesque bigotry against Palestinians, Arabs and Muslims.

“We support free speech, and this resolution abrogates that and promotes Islamophobia, which is at an all-time high,” said Bangladeshi-American Community Council president Mohammed N. Mujumder.

After the hearing, New York City Students for Justice in Palestine, one of the groups involved in the disruption, wrote in a statement: “These speakers relied on transparent colonial and racist rhetoric, drawing out Islamophobic notions of Muslims and Arabs as savages, diametrically opposed to the civilized, modernized State of Israel. We do not normalize with oppressors and their representatives. We do not dialogue with oppressors and their representatives. We will combat Zionism without compromise on all its fronts until victory and liberation for the Palestinian people.”

As groups opposed to the resolution await further hearings, many ask supporters of Palestine to call Rosenthal (212-788-6975), Council Speaker Melissa Mark-Viverito (212-788-7210) and their own council member (311) to protest the bill and urge that it be stopped.

New York City-area boycott, divest and sanctions (BDS) activists are also mobilizing against the Jewish National Fund, which manages 93 percent of the land in Israel, including 80 percent owned by the state, “solely for the Jewish people,” following the ethnic cleansing of its Palestinian inhabitants.

A demonstration will take place against the JNF’s national conference in the New York Hilton Midtown, at 1335 Avenue of the Americas, beginning at 12:30 p.m. on Sunday, Sept. 18.