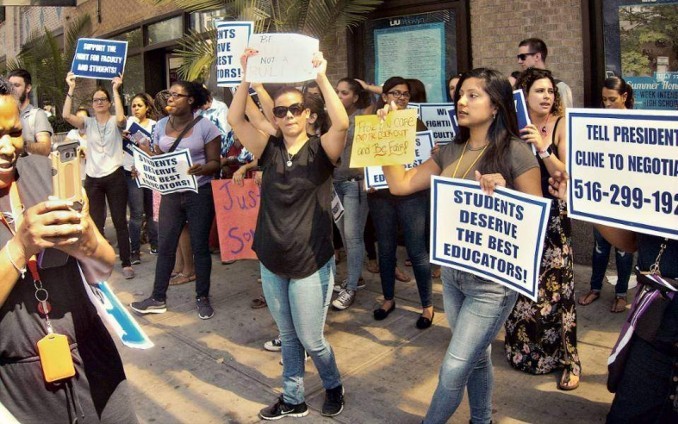 Teachers and students at mass protest of lockout, Sept. 7.

This writer worked in the City University of New York’s computer center for 24 years. Before that, he taught full and part time at various institutions.

A few hours after their union’s contract expired on Aug. 31, all 400 members of the Long Island University Faculty Federation, an affiliate of the American Federation of Labor, had their pay and health benefits stopped, their email accounts frozen and were told to stay out of the campus. The administration had locked them out.

Many experts in labor history assert that it is the first lockout in higher education, but if the LIU administration wins, it certainly won’t be the last.

As a college degree has become a requirement for more jobs, colleges have turned to more low-paid, temporary faculty, called adjuncts, to expand instruction. In general, adjuncts have no job security.

LIU, which is the new brand name of Long Island University, said it locked the union members out to preempt a strike. The union leadership, to the contrary, indicated at a mass picket on the first day of classes, Sept. 7, that the union was prepared to work without a contract. They pointed to their colleagues at the Professional Staff Congress, representing the faculty and staff at the City University of New York, who worked for seven years without a contract.

The union members had overwhelmingly rejected the contract proposed by the LIU administration on Sept. 6. The proposal left intact the substantial disparity of salaries between LIU Brooklyn and LIU Post, a satellite campus in eastern Nassau County. It had also cut the already low adjunct pay by 20 to 30 percent.

The LIU administration has been preparing for this aggressive lockout. All summer, its human relations office has been hiring replacement teachers, what union members describe as “scabs.” Generally, university and college subject departments and programs, which have the skills to evaluate teacher qualifications, make these decisions to hire. Human Relations, which usually fills out the paperwork, this time actively sought the scabs.

While LIU was claiming that every class was staffed by a qualified teacher, students at the Sept. 7 demonstration and since have pointed to obvious deficiencies. The union has documented these deficiencies in letters it has sent to 14 accrediting agencies. (LIUFF.net)

Students have portrayed their very expensive education as totally disorganized and have walked out and held sit-ins at various offices. They want their real teachers back.

In a letter sent to students, the LIU administration claimed that every dollar that would go to faculty raises would be a dollar taken from student scholarships. Speakers at the Sept. 7 rally called this letter a blatant lie.

Support from other education unions has been quick to come. The AFT and the New York State United Teachers, which is a federation of all the education unions from pre-K to university in New York state, expressed firm support. The Carpenters union, whose members at LIU don’t have a contract, and the Professional Staff Congress both sent major delegations to the Sept. 7 picket line.

English professor Deborah Mutnick, a member of the union executive committee, told the Sept. 4 Nation magazine: “I do feel personally like we’re fighting for something much bigger than this contract. What’s happening in higher education, what kind of country are we going to become? There is no public anymore, there is no educational context for this, it’s all about money.”