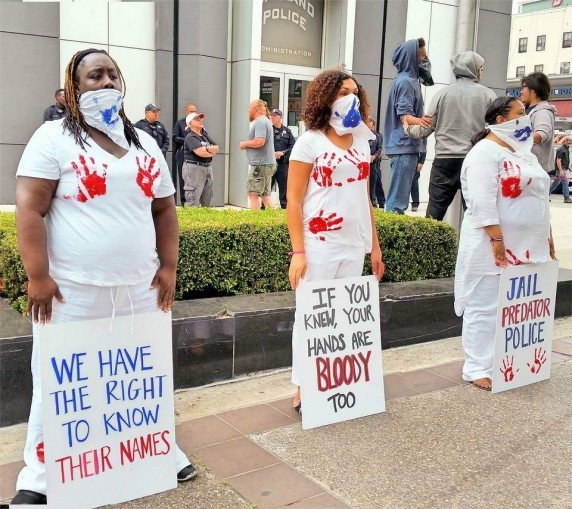 A teenage victim, raped and sexually abused by Bay Area police officers from Oakland and several other police forces since she was a minor, has been victimized by police agencies once more. Celeste Guap is the key witness in as yet uncharged cases against at least eight Bay Area officers.

Despite that fact, the Richmond Police Department arranged to send Guap to a rehabilitation center in Florida. This department has officers involved in the wide-scale predatory policing scandal. Suspiciously, after being at the center for only three days, the victim has been charged with assault and battery and is in the Martin County jail, held under $300,000 bail.

Attorney Pamela Price slammed the fact that law enforcement agencies sent Guap to Florida before a single charge against a police officer had been filed: “From a legal perspective, it looks like witness tampering.” Price pointed out that there are plenty of rehab programs in the Bay Area. Her organization, the Coalition to Restore Public Trust, held a press conference on Sept. 1 to demand that Kamala Harris, attorney general for California, take over the investigation into the case.

The East Bay Express, which broke the rape and sexual abuse story in May, ran a Sept. 2 editorial calling on authorities to extradite Celeste Guap to California. The editorial concluded: “Meanwhile, we need to find out who sent her into darkness in the Sunshine State, because that decision endangered her life. Whoever made it needs to be held accountable.”

The editorial attacked local mainstream media for revealing the teenager’s real name, stating: “When it comes to disclosing the names of sex-crime victims, reporters and editors typically abide by the standards established by the Society of Professional Journalists.” Apparently, Florida law enforcement released not only her identity but her medical history to press. (The name used in this article is not the teenager’s name, but a pseudonym in place in media coverage since May.)

In an East Bay Express Sept. 1 article on Guap’s Florida arrest, Guap’s mother questioned “why a drug treatment center would call the police on someone going through withdrawal from a highly addictive substance such as heroin.” The mother added: “I don’t want to believe it’s a setup.”

In a press release, the TBOC commented, in part: “In the three months since the public learned of the Bay Area-wide sexual exploitation and misconduct by law enforcement, no charges have been brought against any officers or staff involved in the commission or cover-up of crimes and departmental policy violations. Why aren’t our District Attorneys dedicating the same resources toward this gang activity as they would if it were conducted by civilians?”

Heavy press presence with the TBOC delegation pressured O’Malley into coming out of her office to talk. Despite the scandal blowing wide open in May, O’Malley claimed she was still investigating and would have an announcement — “in the next couple of weeks.”

Demanding a response, the TBOC had four key demands:

“1. Prosecute all sworn officers who committed or had peripheral involvement in crimes or the conspiracy to cover up those crimes.

2. Investigate with the intent of pressing charges and jailing criminal cops and enumerate the reasons.

3. Announce a full investigation by an outside agency that will examine how many people have been wrongfully incarcerated due to cases touched by these officers, as well as the depth and breadth of corruption within each department.

4. Acknowledge the imbalance of power that always exists between police officers and the general public and state that the coercion and enticement of a minor is never the fault of the child.”