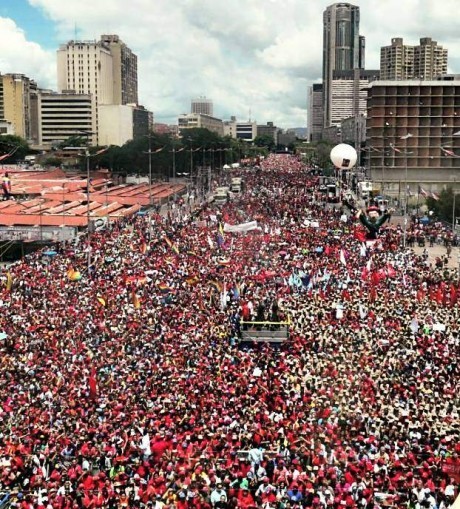 The international corporate media reported on a large demonstration in Caracas, Venezuela, on Sept. 1. But there were two demonstrations that day. The one not covered in the U.S. was huge and in support of the progressive government of President Nicolás Maduro.

Red-clad supporters packed Avenida Bolivar in the heart of the capital for as far as the eye could see. They were responding to the call for a “Great Occupation” issued by Maduro and the United Socialist Party of Venezuela (PSUV) to defend peace in Venezuela.

A New York Times article on Sept. 2 did not even mention #LaCalleEsChavista, meaning “the street supports the Chávez program.”

Instead, the media widely reported on the action built for weeks by the anti-Chavista electoral coalition called Mesa de la Unidad Democrática (MUD), which was limited to the more affluent suburb of Miranda. MUD had projected that a million people would come to the capital on Sept. 1 to “take Caracas” and overthrow the Bolivarian Revolution.

On Aug. 31, Jeanette Charles reported that “opposition legislator Freddy Guevara admitted that the opposition had used an ‘economic boycott’ to force the government out. Moreover, he vowed that the opposition would reach Miraflores Palace on September 1st, just as they did in 2002.” She was referring to the short-lived coup on April 11 of that year. (venezuelanalysis.com)

While MUD marchers posed for photo ops in T-shirts proclaiming peace, their organization unleashed violent gangs to attack Venezuelan security forces with firebombs and rocks. It was an attempt to renew the 2014 “Guarimba” strategy that killed 43 innocent people when the right wing set up barricades, strung wires across roads to decapitate riders and fire-bombed government buildings. This time security lines prevented any provocations from reaching the Caracas center or government buildings.

Since the death of President Hugo Chávez on March 5, 2013, the opposition has used violence as well as destabilization tactics against the Maduro government, which has faced a steep drop in world oil prices. Capitalist owners have restricted production, and needed goods are hoarded by illicit distribution networks that divert a staggering 37 percent to 40 percent of retail goods to street sales and even sales in other countries. (Statistics from a webinar with Venezuelan Consul General Jesus Rodriguez, based in Chicago.)

The government has offset some of the inflation-fueled price hikes by decreeing a 50 percent pay increase for workers and issuing debit cards with cash assistance to the poorest Venezuelans. But the inflation also negatively impacts better-off Venezuelans, who drive the opposition.

In July the Venezuelan government took over a factory producing diapers and other personal hygiene products at the request of 971 workers who had occupied the plant after transnational corporation Kimberly-Clark shut it down. More than 1,200 farms, companies and other private businesses have been taken over by the Bolivarian government. (Wall Street Journal, July 11)

MUD won a parliamentary majority in the December 2015 election. This parliamentary attack mirrors the campaign against Brazilian President Dilma Rousseff, who was ousted on Aug. 31, a day before the mobilizations in Caracas. MUD has now collected enough valid signatures to trigger a vote to recall President Maduro, but its campaign was held too late to force a new presidential election. Instead, if Maduro were to be recalled, the PSUV vice president would become president until the next election in 2018.

At stake is the distribution of the profits from Venezuela’s enormous oil reserves. Elected governments that prioritize anti-poverty measures, education, health care and well-being for the working masses are seen as impediments by profiteering corporations. In the 17 years since the Bolivarian Revolution began, the government has transformed the lives of the previously marginalized majority of Venezuelans, including the Indigenous, those of African descent, LGBTQ communities, women, people with disabilities and elders. Their rights have been codified in the Bolivarian Constitution.

On Dec. 18, 2014, the day after President Barack Obama announced his government’s willingness to resume diplomatic relations with revolutionary Cuba, he deepened the U.S. attack on the Bolivarian Revolution in Venezuela by signing the Venezuela Defense of Human Rights and Civil Society Act. The bill was authored by New Jersey Sen. Bob Menendez, a virulent opponent of the Cuban Revolution.

The act was implemented on March 9, 2015, when Obama declared “a national emergency with respect to the unusual and extraordinary threat to the national security and foreign policy of the United States posed by the situation in Venezuela.” (whitehouse.gov) This “national emergency” was renewed for a year this March 3.

Secretary-General Luis Almagro Lemes of the Organization of American States directly intervened in the 2015 Venezuelan parliamentary elections. The OAS, headquartered in Washington, D.C., has campaigned openly on the side of pro-capitalist MUD, hiding its counterrevolutionary intent behind the figleaf of “democracy.”

MUD coalition members have long been funded through the U.S. Agency for International Development and the National Endowment for Democracy. Marina Corina Machado headed the nongovernmental organization called Súmate, which received NED funding. Machado, a former opposition lawmaker, signed the decree to dissolve all state institutions during the failed 2002 coup against Chávez.

It is clear that the opposition wants to dissolve all the social programs that have elevated the poorest Venezuelans, whether by parliamentary means or violence.