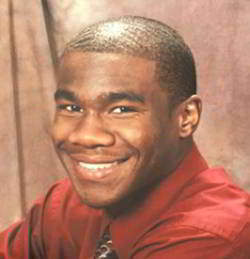 Activists trying to bring to light the police killing of Jamarion Robinson marched on Aug. 19 to CNN’s Atlanta headquarters from Clark Atlanta University. Very few details have appeared in the mainstream media about this horrific shooting, which happened on the afternoon of Aug. 5.

Police and U.S. marshals had been sent to an apartment in East Point in south metropolitan Atlanta to arrest Robinson, allegedly for shooting at both a police officer and an apartment maintenance worker. The 12 marshals broke in Robinson’s door with a battering ram and then opened fire with automatic weapons, shooting in the apartment over 60 times and hitting Robinson with over 20 bullets. Some of the shots were virtually point-blank.

Police also used a flash-bang grenade to completely subdue him, after which three shots were fired by someone standing over him. The police put out that he was armed and fired back, but no evidence of this was found by post-murder investigators.

Members of Robinson’s family held a press conference on Aug. 14 to begin to bring the details of his killing to the larger community. At the press conference, community members did a walk-through of the apartment, which had been left just as it was at the time of the shooting.

After the shooting, police showed Robinson’s grandmother a picture of the man they were searching for. She says it was someone different, that the police had the wrong man. The police also had knowledge of Robinson’s struggle with bipolar disorder, yet didn’t try to engage him or even wait him out. They went in with guns blazing.

At the rally, people vowed to go back to their communities with the truth about Robinson’s death at the hands of police and to continue to seek justice.