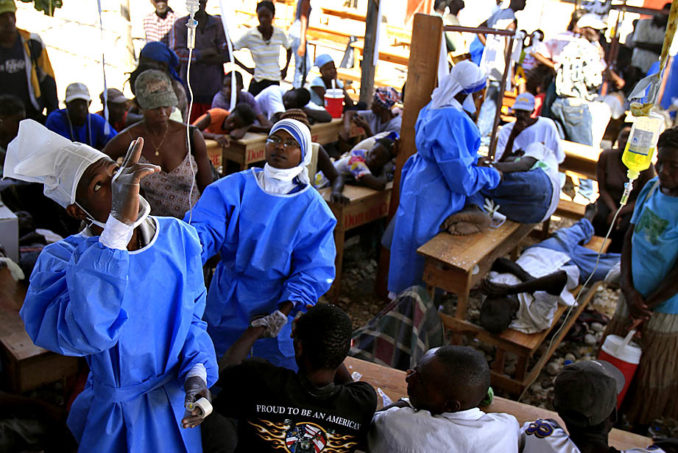 The cholera epidemic that officially killed 9,361 people in Haiti and infected 786,530 after it was introduced by the United Nations’ Minustah troops in October 2010 had an even more pernicious effect than the earthquake which ravaged Haiti earlier that year.

This should be kept in mind when reading the U.N. report released this August by Philip Alston, which for the first time admits the U.N. role in introducing cholera into Haiti. (tinyurl.com/zsatdds)

It was pernicious, not just for the number of people killed — although scientists studying the spread of cholera in Haiti have challenged the official figures as too low — but for the assault on human rights and dignity. These have been systematically and consistently violated by the U.N.’s refusal to recognize its legal and moral responsibilities.

The U.N. still refuses to admit what it did in its Minustah camp on the Méyè (Meille) River near Mirebelais that caused the death of thousands of Haitians and the debilitating illness of hundreds of thousands more.

Minustah is an acronym for the U.N. occupation force in Haiti. Minustah has been the main military force in Haiti since June 2004, when it took over from a coalition of U.S., French and Canadian imperialist troops that had occupied Haiti two months earlier.

In short, Minustah is a cover for the continued imperialist occupation of Haiti, especially meant to hide the dominant U.S. role. This occupation is aimed at preventing Haiti’s people from taking an independent political direction, as they did when they twice elected Jean Bertrand Aristide as president.

A new book, “Deadly River: Cholera and Cover-Up in Post-Earthquake Haiti,” exposes how the U.N., with the active and essential assistance of the U.S. Centers for Disease Control and Prevention (CDC), hid its own responsibility. The author, Ralph R. Frerichs, is a retired epidemiologist from the University of California, Los Angeles.

Frerichs’ book relies on and reports the work of Renaud Piarroux, a French expert on cholera. Piarroux began his on-the-ground investigation of cholera in Haiti shortly after the first case was confirmed on Oct. 22, 2010.

Frerichs documents how the U.N. and the CDC distorted the science and the facts about the origin of the disease and tried to shift the blame onto dilapidated and deficient sanitation in Haiti. This follows the recipe for one of the oldest tricks in ruling-class propaganda: blame the victims.

The clearest example of the role of the CDC in this cover-up is an Oct. 29, 2010, interview of Eric Mintz by NPR Senior Science Reporter Joe Palca. Mintz is a medical epidemiologist from the CDC who was in Haiti helping the Haitian government with its investigation of the cholera epidemic.

A Haitian caller asked: “And there’s a rumor in the Haitian community that the source of the cholera was from U.N. soldiers, Nepalese U.N. soldiers who were emptying their latrines upriver from where it happened. Is that true?” Mintz responded: “Well, I’ve heard that rumor. It is circulating here in Haiti, and we have no evidence at all to support it.” And then he went on to talk about some scientifically unfounded theories about its spread in Haiti.

Frerichs makes the point that many nongovernmental organizations and international health organizations believed that challenging Minustah’s sanitation would make its role in guaranteeing “security and stability” in Haiti precarious.

The corporate media in the U.S. are only now giving publicity to the recent report by Alston that says the epidemic “would not have broken out but for the actions of the United Nations.” As early as November 2010, the Haitian press was documenting the U.N.’s responsibility and the Haitian people were in the streets protesting.

The U.S.-based media could have put major pressure on the U.N. much earlier. Workers World published an article on Nov. 24, 2010, describing the protests in Haiti and the reports in the Haitian press.

Even after the Alston report, U.N. Secretary General Ban Ki-moon still hasn’t formally accepted direct responsibility. U.N. lawyers, who are from the U.S. Department of Justice, were successful in getting the U.S. Court of Appeals to accept the U.N. claim of “sovereign immunity.” This allowed the U.N. to refuse to appear in court when 5,000 Haitian victims of cholera brought a case against the U.N. (New York Times, Aug. 18)

The situation is still extremely fluid, and strong criticism has been raised about the U.N.’s role in Haiti and elsewhere. Despite — or because of — the Minustah occupation, Haiti’s government is still unstable.