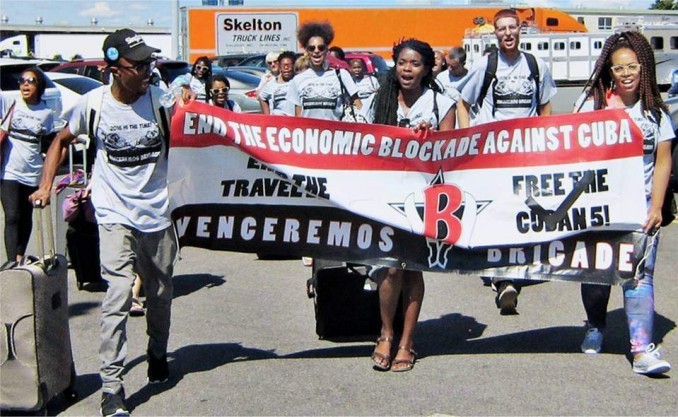 The 47th Venceremos Brigade returned from Cuba by marching across the Peace Bridge, which links Fort Erie, Canada, with Buffalo, N.Y., on Aug. 8. In making the trip, the members defied the continuing U.S. restrictions on travel to that socialist country. Chanting “We’re gonna end this travel ban!” they were met with cheers, banners and rallies, and a picnic.

In a joint statement with IFCO/Pastors for Peace, the two travel challenge groups openly declared that they had traveled to Cuba in solidarity and without licenses. They reaffirmed their commitment to defending, through continued civil disobedience, Cuba’s national sovereignty and right to self-determination. Their struggle will continue, they emphasized, until the blockade and travel ban are lifted, the U.S. Naval Base and prison at Guantánamo Bay is closed with the illegally occupied land returned to Cuba, and the U.S. government ceases its attempts to subvert the Cuban revolution.

They pointed out that as the energy surges for building a movement in the U.S. for racial, economic and social justice, this movement must look to Cuba as a role model. Cuba has shown us that another world is possible.