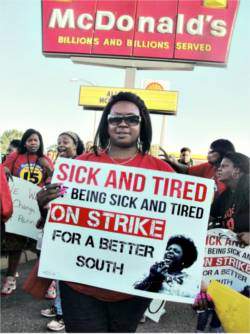 The first-ever “Fight for $15” conference was held the weekend of Aug. 13 in Richmond, Va. Thousands of low-wage workers marched through the streets of the former capital of the Confederacy to “draw links between the racist history of the United States and current policies … and the low wages workers are experiencing,” stated national organizer Kendall Fells. Look for coverage from this conference in an upcoming Workers World.