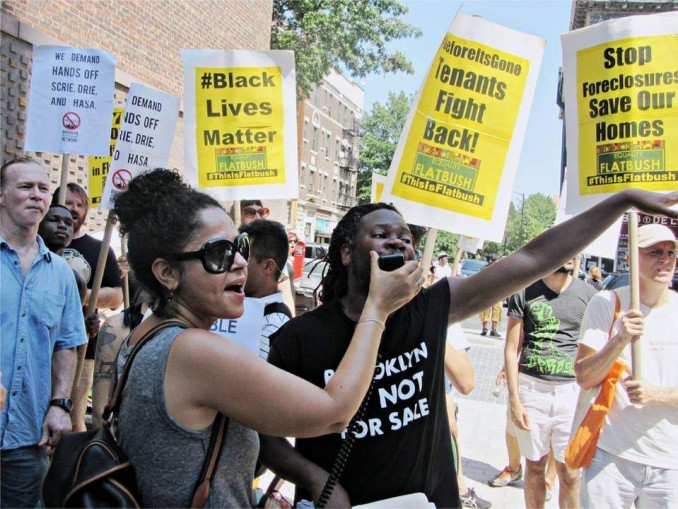 The Equality for Flatbush Project (E4F), a people-of-color-led, multinational grass-roots organization which does anti-police repression, affordable housing and anti-gentrification organizing in the Flatbush and East Flatbush sections of Brooklyn, organized a march and rally on Aug. 13.

E4F is working on 11 campaigns through volunteer power. This is the first march organized in the Flatbush community and the first time a march has happened connecting police violence, racism and gentrification in our neighborhood.

Some 250 people from all over Brooklyn braved the scorching heat to march in the sun, but hundreds more participated beforehand in this effort. These included many people who went door-to-door to get endorsers from businesses, who then put up flyers for the march, and all the folks who went out leafleting and doing tape-ups on poles late into the evening.

So when the New York Police Department and the NYC Department of Parks & Recreation tried to stop the march by denying permits, the onslaught of community support for two days, both through social media and with phone calls, forced them to issue permits.

The rally was held under the shade of the trees in Prospect Park, so people could sit and be fully engaged — versus suffering in the heat. It was co-chaired by this writer and Zakiyah Sayyed, a leader of the Brooklyn Anti-gentrification Network. Speakers included Alicia Boyd, founder of Movement to Protect the People; Elizabeth C. Yeampierre, of UPROSE; Bisi Ideraabdullah, executive director of Imani House; Christine Lewis, leader of the Domestic Workers United; Noha Arafa, lawyer and activist with New Yorkers Against Bratton; Michael Higgins, from Families Families United for Racial & Economic Equality; as well as community members from Bushwick, Brooklyn, Jamaica, Queens and elsewhere who took the mic to talk about struggles happening in their neighborhoods.

Ryan Richardson and Michael “Ziggy” Mintz, both part of the leadership of E4F, talked about components of the newly launched Real Estate Watch Project of the E4F Investigative Research Team, who work to hold greedy landlords and developers accountable by providing information and tools to empower residents.

Nabil Hassein, of Millions March NYC, took time away from the very important occupation at #AbolitionSquare, formerly known as New York City Hall Park, to come to the rally. #ShutDownCityHall­NYC started on Aug. 1. That is the kind of direct action and occupation that led to the resignation of William Bratton as police commissioner on Aug. 2.

The march stepped off from the park with the goal of “visiting” targets of gentrification and police repression along the way. First stop was the infamous 23-story luxury development at 626 Flatbush Ave. owned by Hudson Companies, where studio apartments start at $2,000 a month.

Flatbush is largely a Black and Brown (South Asian and Latino/a) migrant community where the average median income is under $40,000 a year. Hudson boasts of offering “51 affordable units for people making between $33K-$40K” a year, but the other 200 units will go to people who can afford $4,000 a month for a two-bedroom apartment. Already small, long-time businesses have been closed or are fighting to keep their leases on the block.

Known for being part of the first wave of gentrification in the historically Black neighborhoods of Fort Greene and Bedford-Stuyvesant, Greenlight Bookstore is one of the first businesses to lease commercial space at 626 Flatbush Ave. In 2015, the Greenlight Bookstore owner, Rebecca Fitting, a new white resident of Flatbush, helped to organize “meetings on crime” in our neighborhood, giving a platform for police to further terrorize us. E4F has mobilized for that police meeting to intervene and make sure residents of color were heard and facts of police violence in the neighborhood were put front and center.

The march was confronted by a Hudson Company employee who told the community members they were on “private property” and had to leave — which is funny since the developer has been openly advertising “tours” of the complex. The Hudson employee then called the police on the march of mostly Brooklyn residents.

Marchers then went to visit MYSPACE NYC, which is infamous for working with landlords who displace longtime, rent-stabilized residents of color in neighborhoods such as Flatbush, Crown Heights and Bushwick in order to bring in new white residents who are then severely overcharged to live in rapidly gentrifying neighborhoods. Interestingly enough, while this is their peak sales season, their office was closed.

Marchers went down sides streets to show solidarity with longtime Black homeowners and tenants whose neighborhood is being renamed “Prospect Lefferts Garden” by developers and white-led community groups in that neighborhood. The main hashtag #ThisIsFlatbush is being used by E4F and other Black-led Flatbush groups to fight the racist attempt to rename and push out longtime Caribbean residents.

As the march got to Church Avenue and Flatbush, protesters witnessed the harassment of a Caribbean woman vendor by the police. For weeks E4F has been working to stop the harassment of majority women-of-color vendors who sell fruit, cold water, snow cones and jewelry at this intersection. The group has been collecting tickets and lined up civil rights attorney Moira Meltzer-Cohen to meet with the vendors. E4F is also planning to launch a public campaign to stop the NYPD from issuing $200 tickets to these “independent” vendors. There is a similar campaign for the dollar van and cab drivers, who are Black men living in Flatbush and East Flatbush, who often get anywhere between $600 and $2,000 worth of tickets a month.

The final stop was at the 67th precinct in East Flatbush, which is responsible for the murders of Shantel Davis in 2012 and Kimani “Kiki” Gray in 2013. Marchers were joined there by Ang Hicks, Davis’ aunt. The case of Kyam Livingston was also raised. On July 21, 2013, Livingston suffered for over six hours in pain, begging to be taken to a hospital, but was refused medical attention by the NYPD. As a result he died in police custody.

E4F has planned a strategy session about fighting gentrification on Sept. 24 at 2:30 p.m. at the Flatbush Library at 22 LInden Blvd. and Flatbush. Visit facebook.com/EqualityForFlatbush/.