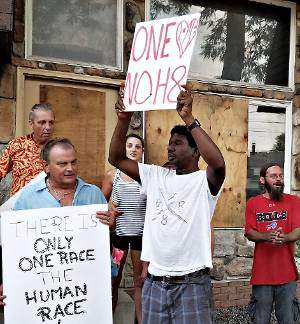 North Tonawanda residents march against racism in their town on Aug. 5.

On the first day of August, a shocking letter was delivered to Kenneth Walker in North Tonawanda, an overwhelmingly white suburb of Buffalo and Niagara Falls in Western New York state.  It demanded that he quit his volunteer firefighting job immediately and leave town “or you’ll regret it.” Replete with racial slurs, this vile message threatened the only African-American firefighter in the town.

Two days later, the Walker family home was torched, their two cats killed.  Nearly all of their possessions were destroyed.  Three other apartments were badly damaged.  Fortunately, Walker, his spouse, Amanda Walker, their two children and the other residents were not home when the fire blazed.

A white neighbor, Matthew Jurado, confessed to the arson, but not to writing the threatening letter.  He claims he knows who wrote it, but no one has been held responsible for doing so.  Jurado was arrested on Aug. 4, charged with arson in the second degree, a Class B felony and released on $50,000 bail. If found guilty, he faces a mandatory minimum sentence of five years in jail.  It remains to be seen if he will be convicted and imprisoned.

This was an additional blow to the Walkers, who had invited Jurado into their home on a few occasions and considered him a friendly neighbor. In fact, the Walkers had asked him to check if their door was left unlocked.

Jurado denies having a racist motive and says he acted out of anger at being fired from a job at another local fire station.  However, his racism was exposed by his targeting the only African-American firefighter.  Moreover, his companion, Dorothy Amado, commented that Jurado had posted a Facebook message to her daughter’s African-American partner, invoking the Klan, to frighten him. (Buffalo News.com, Aug. 9)

Donald Trump and other reactionary politicians are scapegoating immigrants and other people of color for job loss among white workers, instead of blaming the bosses. This racist propaganda might have encouraged Jurado to take revenge against Walker after losing his firefighting job.

Immediately, the community rose to the occasion and flooded the Walkers with gestures of solidarity and donations of funds, furniture and toys.  Hundreds of people from near and far have expressed solidarity and offered concrete help, not only to show they care but to show opposition to racism.

Ellie Dorritie, Workers World Party organizer in Buffalo, explained: “The outpouring of community support and firefighter outrage was what pushed the police to investigate the racist letter and connect it to the fire. Social media played a big role in activating town residents.  Once people saw the racist letter posted, they wanted to do something about it.”  She emphasized the region has a “shameful history of racism, but support for the Walker family has broken through that.”

The Gratwick Hose Volunteer Fire Company has held benefits for the Walker family, bringing in thousands of dollars and essential items.  A sign posted outside their building says, “We support Ken Walker.”

Gratwick President Bob Brennan, who considers Walker a close friend, felt “grief and rage” after the fire.  The following day, he answered sympathetic phone calls for 15 hours, and then initiated the fundraising effort, determined to raise a “positive” out of a “horrible tragedy.” Firefighters came from across the state to attend the Aug. 7 benefit; fundraising has continued.

In response to the solidarity, Walker said, “The only word I can say is overwhelming.  The support is phenomenal.” His spouse, Amanda Walker, remarked on the messages they had received from people all over the country: “Such a great positive came out of such a terrible thing. We never expected this outpouring.  Everyone has been so amazing.”  (Buffalo News.com, Aug. 7)

A concerned community member posted a call to action on a Facebook page, saying they must “stand up to racism in North Tonawanda” and march on Aug. 5 to “show the bigots we will not stand for hatred and ignorance in our community.”

On that date, the Walkers’ neighbors and friends marched through their town, demonstrating their solidarity and denouncing bigotry and hatred.  They chanted, “Hey, hey, ho, ho, racism has got to go!”  This protest was not organized by political activists, but by residents of this working-class town of 31,000, whose population is 95 percent white and 1.2 percent African-American.

Demonstrator James Walaski-Miller, said, “When I saw the letter, I cried, and when I found out his house burned down, I got physically ill. It just makes me sick … that it went this far, and someone could have enough hate …  to do that to a fellow human being.” An unidentified woman stressed, “There is no room for racism in my Western New York.” (WGRZTV, Aug. 5)

A local firefighter set up an online donation page which, to date, has raised more than $150,000 from 4,000 people countrywide.  Messages of sympathy and solidarity as well as denunciations of racism have been posted at that web page.  Free trips have been offered to the family, including one to California, sponsored by two fire departments there.

The overwhelming solidarity has shown that racism will not be tolerated in this town.  The Buffalo News Aug. 9 editorial concluded, “Far outnumbering the hateful few, fortunately, are the thousands of people who acted to help the Walkers.” The next day, the newspaper quoted Buffalo NAACP President Frank Mesiah: “It sent a message of how to respond to racism in other communities.”

Kenneth Walker is determined to remain a firefighter.