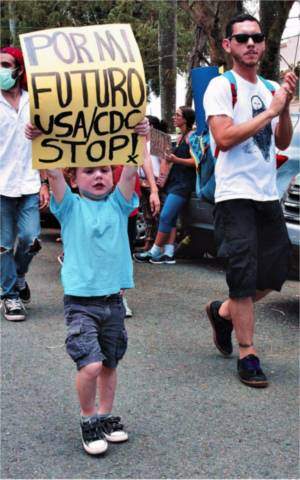 There is widespread opposition in Puerto Rico to the imposition of aerial spraying of Naled by the Centers for Disease Control and Prevention (CDC). Naled is in the most toxic class of pesticides that may cause fetal brain damage and kill bees, birds and fish. The U.S.-based CDC wanted to use Naled in an attempt to kill mosquitoes that carry the Zika virus and curb the raging Zika crisis in Puerto Rico.

On Aug. 4, Naled was sprayed in North Miami, Fla., where the first cases of locally acquired Zika infections were reported in the continental U.S. However, the CDC has admitted that this control measure may not work well in Miami because the mosquitoes may be developing resistance to pesticides.

In Puerto Rico, the number of Zika infections is expected to explode throughout the summer. Over 8,700 cases of Zika have already been reported there. The CDC predicts that between 20 to 25 percent of the island’s estimated 3.5 million people will be infected with Zika before the end of the year. (npr.com, Aug. 6)

More than 900 pregnant women have tested positive for Zika. Every day 50 more test positive, seven times more than in January. But experts at the CDC say that is probably a massive undercount because many women are not aware they’re infected and are not getting tested. By the end of the year, the CDC estimates that 10,000 pregnant women in Puerto Rico may be infected with Zika and hundreds of infants may be born with microcephaly, a Zika-related birth defect that causes severe problems with fetal brain development and unusually small head size. (New York Times, July 30)

Naled is “definitely not safe during early brain development,” warned Jennifer Sass, even “when sprayed at legal exposure levels.” Sass is a scientist with the Natural Resources Defense Council. She added that “spraying Naled too freely would also build up resistance, which would be detrimental in the long run in the fight against the virus.” (Huffington Post, July 23)

When 25,000 pounds of Naled were secretly shipped to Puerto Rico in July, it sparked a storm of demonstrations. Signs read, “U.S. We are not your damn experiment! #Naled” and “Por mi futuro, USA/CDC stop!” The United Front Against Aerial Spraying helped organize the protests, along with numerous organizations, businesses, workers, scientists, farmers, health workers, environmentalists and politicians.

Protesters are angry that Washington has still not appropriated the $1.9 billion that President Obama requested in February to help combat the spread of Zika. Many oppose the use of Naled, which failed to stop an outbreak of dengue fever, also carried by mosquitoes, in Puerto Rico in 1987.

In response to widespread protests against spraying Naled, the San Juan government filed a lawsuit July 21 in Puerto Rico’s federal court charging that the plan to spray would pose “a significant risk” to wildlife and fish in the area and to the “general health” of San Juan residents. By July 25, the CDC relented after Puerto Rican Gov. Alejandro García Padilla, who has veto power, opposed the use of aerial spraying.

Shipping Naled to the island is the latest U.S. violation of Puerto Rico’s sovereignty. During the Vietnam War, the U.S. tested napalm and Agent Orange in Puerto Rican jungles. The U.S. in the 1950s tested the first birth control pill on Puerto Rican women and also strong-armed over 30 percent of childbearing women working in U.S. industries on the island to become sterilized in order to keep their jobs.

For 55 years the U.S. used the Puerto Rican island of Vieques as a naval training and testing center, dropping 23,000 bombs and leaving more than 22 million pounds of toxic military and industrial waste. The cancer rate in Vieques is 27 percent higher than that on the mainland. In 1994, the Department of Energy admitted it had used Puerto Rican prisoners for human radiation experiments during the 1950s and 1970s. (“Fish, Wildlife and Bombs: The Struggle to Clean Up Vieques” by Katherine T. McCaffrey, nacla.org)

Puerto Rico’s obstetricians and gynecologists have started a new program to help fight Zika. Their association is offering free contraception to any woman who wants to delay pregnancy. This includes more expensive and long-lasting implants and intrauterine devices, as well as pills and condoms.

The United Front Against Aerial Spraying initiated the Cleaning Olympics of Mosquito Breeding Sites on Aug. 7. Going door-to-door, street-by-street, group members are trying to eliminate all standing water where mosquito larvae live, places where even aerial spraying could not reach. They say that instead of carrying out Washington’s orders, the workers will do what their own politicians and government agencies have not done.

The workers plan to implement the same measures as those used in socialist Cuba, which developed a community-based program to eradicate Zika-carrying mosquitos. Since March 15, when the last of 14 locally transmitted cases was reported, Cuba has been Zika-free.