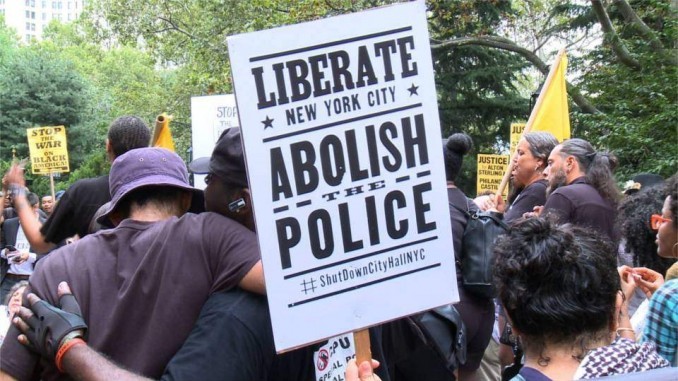 Activists with Millions March NYC began an occupation of New York City Hall Park the morning of Aug. 1. The protesters have renamed it “Abolition Square” to emphasize their commitment to a world without the state terror of policing.

Organizers want the racist institution of the New York Police Department abolished and replaced by community-based policing that residents can hold accountable.

As a path to that goal, activists said they would occupy Abolition Square until Mayor Bill de Blasio met three key demands: fire Police Commissioner Bill Bratton and end “broken windows” policing; defund the New York Police Department and invest in Black, Brown and working-class communities; and provide reparations to victims’ families and survivors of police terrorism out of the NYPD budget.

By the end of Aug. 2, the MMNYC activists had won their first demand. Despite corporate news articles saying it wouldn’t happen, Bratton announced his resignation.

In a statement to WW, Monica Moorehead, Workers World Party presidential candidate, urged widespread support for Abolition Square. She said of her visit there: “It was so inspirational being in the midst of young activists — Black, Latinx, Asian, LGBTQ, those with disabilities — united around the issues of fighting for reparations for survivors of police brutality and family members who have lost loved ones to police violence, along with the demand to defund the NYPD, which has billions of dollars at its disposal to repress and oppress Black and Brown youth. This occupation, which many view as liberated space, deserves the solidarity of every progressive and revolutionary.”

MMNYC is a “grassroots multiracial collective of organizers committed to building and strengthening the movement for Black lives,” according to the occupation’s press release. The activists represent communities at “the intersections of multiple social movements — Black Lives Matter, LGBTQIA+, Indigenous people, prison abolition and others.” Groups participating include Equality for Flatbush, Peoples Power Assemblies NYC (PPA), NYC Labor for Black Lives, NYC Shut It Down, Samidoun: Palestinian Prisoner Solidarity Network and more.

The Abolition Square occupation reflects the intensification of the Black Lives Matter movement struggle, with similar ongoing occupations in Los Angeles and Chicago. On Aug. 7, the Let Us Breathe Collective and other groups entered the 17th day of occupying Freedom Square in Chicago. The encampment is on an abandoned lot across from the Homan Square warehouse building, the Chicago Police Department “black site” now infamous for illegal detention and torture of 7,000 people, a majority of them Black. (The Guardian, Oct. 19, 2015)

By Aug. 6, Black Lives Matter-LA was in the 25th day of occupation of Los Angeles City Hall under the banner “Decolonize LA City Hall.”  The 24-hour-a-day occupation demands the firing of the LA police chief.

Melina Abdullah, chair of Pan-African Studies at California State University, Los Angeles and a spokesperson for BLM-LA, described the LAPD as “the most murderous police department in the country,” most recently for killing Redel Jones, the 30-year-old mother of two. Police harassment of the occupation includes requiring the free-speech-protected encampment to pack up so cops can “clean” the area with power-hoses — for six hours at a time during the historic California drought. (risingupwithsonali.org)

The connection between BLM issues and decolonization links the Los Angeles occupation and that of the Campamento Contra La Junta in San Juan, Puerto Rico. That months-long encampment, mostly by students, protests the U.S.-enacted PROMESA bill, which will impose a profit-driven, colonial-style control board, or junta, on the island nation of Puerto Rico. This neocolonization and economic takeover will hit unions especially hard, including teachers’ unions and the militant electrical workers’ union, UTIER. Solidarity messages have been sent to the Campamento from New York’s Abolition Square.

The BLM movement is expanding internationally in other countries. Demonstrations have been held in Britain, numbering dozens in Cardiff, Wales, to thousands in London. There, on Aug. 5 people in a BLM protest lay down on a road and blocked access to Heathrow, one of the world’s busiest airports.

The actions marked the fifth anniversary of the killing of Mark Duggan, a Black man, by a police marksman, sparking uprisings across London. Other coordinated actions were held on Aug. 5 in Birmingham, Manchester, Nottingham and elsewhere.

Imani Robinson, a spokeswoman for Black Lives Matter U.K., said of the protests: “This is an intentional disruption because our lives, our ability to live free and dignified lives, is being disrupted every day.” (Washington Post, Aug. 5)

The BLM movement has also spread to other countries, including Brazil, Canada and several European nations.