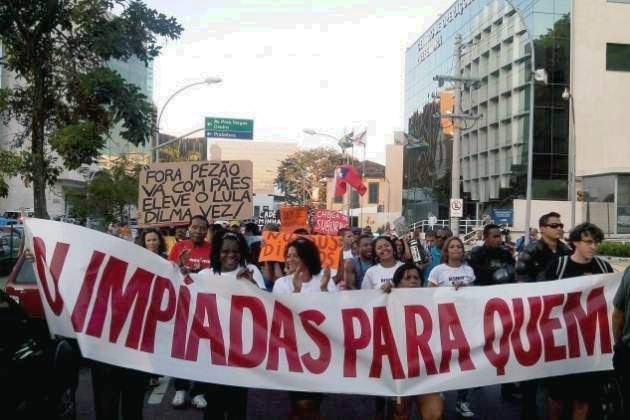 Labeling the Olympic games in Rio de Janeiro the “Exclusion Games” because there is no discount for Brazilians to attend the events, thousands of protesters stood up to a barrage of tear gas and pepper spray just a half mile from the main Olympic stadium on Aug. 5. Illustrating the exclusion, more than 1.3 million tickets remain unsold.

The demonstrators gathered in front of the luxurious Copacabana Palace, where many of the rich attendees and media are staying, and protested the billions spent on this spectacle — especially the hundreds of homes that were destroyed to make room for the stadiums. They also protested the “parliamentary coup” that replaced Workers’ Party President Dilma Rousseff with the corrupt and reactionary Michel Temer.

“We love sports in our city, but our city needs other things like better schools, better hospitals, free access to education,” said Anna Barros, an English teacher in Rio. “We need to invest money in our people.” (nbcnews.com, Aug. 5)

Organized by the umbrella group Comitê Popular Rio, protesters were not only incensed by the enormous cost and incurred debt of the games, but also the dire economic and political situation of the Brazilian people, particularly the workers and the poor.

Later, protesters demonstrated near the Maracana Stadium  where the opening ceremonies were held.

The government recently announced that average wages have fallen by more than 4 percent in the last year, while the number of unemployed has skyrocketed to 37 percent.  This is the worst recession that Brazil has faced in at least a quarter of a century. While Brazil faces epidemics of Zika and dengue fever, hospitals are shutting their doors. (theguardian.com, July 28)

Polls show that 60 percent of Brazilians believe that the Olympics “will do more harm than good” for their country.  (theguardian.com, Aug. 6)

The Rio protest was the culmination of months-long demonstrations that took place throughout northern Brazil, particularly along the route of the Olympic torch. When the torch entered Angra dos Reis, striking teachers, who had not been paid for two months by the near-bankrupt Rio state government, disrupted the relay. This forced the runners to put out the flame and board buses to continue their route.

Of course, Brazil’s elite have already gained millions from Olympic contracts and expect more. Some of these were parliament members who voted to impeach Rousseff.

The elite’s joy at seeing a banker-friendly right-wing government is matched by that of imperialist institutions like the International Monetary Fund. Alejandro Werner, the fund’s Western Hemisphere’s director, told the Financial Times that his recommendations are simple: “a multiyear fiscal program including an important correction ‘in expenditure together with higher taxes,’ combined with cuts to pensions and other entitlements that Brazil cannot afford.” (ft.com, April 27)

In other words, the IMF wants more austerity for Brazil’s workers.

Multinational corporations like McDonald’s and Coca-Cola, as well as media companies, stand to rake in millions from the Olympics. Meanwhile an army of some 85,000 police, soldiers and security personnel shut out the voices of the poor.

The Olympics were last held in Latin America in 1968 in Mexico City. At that time, after a series of demonstrations against the Mexican army’s occupation of two college campuses, a rally of some 10,000 students was held on Oct. 2 at the Tlatelolco Plaza in Mexico City, 10 days before the Olympic Games.

Military units opened fire on the students. Tanks rolled into the square. Hundreds of bodies and prisoners were hauled away on trucks to military bases. Although the government never announced the death toll, it may have reached 3,000, with many more wounded and imprisoned.

The U.S.-supported regime of President Gustavo Díaz Ordaz announced that the students had opened fire on the soldiers, who returned fire to defend themselves. But recently released documents finally reveal the truth.

The Mexican Presidential Guard, a military unit directly under the control of Ordaz, stationed snipers on buildings above the plaza. These snipers shot at the soldiers surrounding the square, which caused them to open fire on the students. The Mexican government ordered this to ensure that the students would not disrupt the Olympic Games. (theolympian.com, May 28)

Imperialist profiteers have turned what should be purely athletic contests into a money-making spectacle designed to enrich the billionaire class, protected from those workers and poor who object by brute force.  But the people of Brazil show no signs that they will be intimidated.