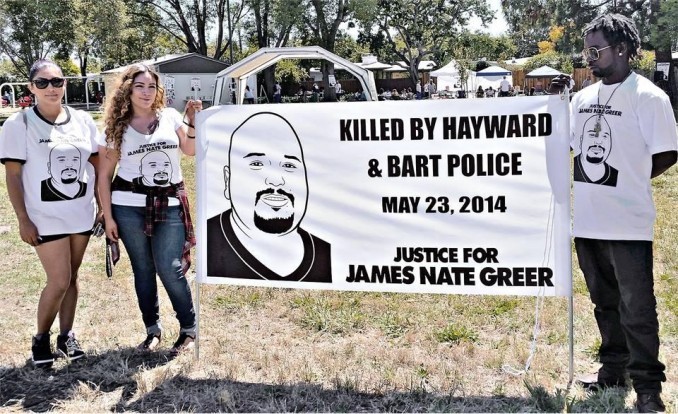 Family members call for justice for their loved one.

On July 30, “A Day to Remember Our Loved Ones,” the Nate Greer family held a barbeque in Hayward, Calif., and invited others who had lost loved ones to police violence to join them.

And they did! Families from across the Bay Area came out, including those of Asa Sullivan, Teo Valencia, Herman Jaramillo, Derrick Gaines and Kerry Baxter, Jr. — all victims of police killings. Also attending were supporters from the Alex Nieto Coalition, the Anti Police-Terror Project, the Idriss Stelley Coalition, Frisco 500 and Workers World Party.

WW: Why was Nate stopped by the ­police?

Deana: The lieutenant told him that he pulled him over for driving “goofy.”

WW: Was anyone with him when he was stopped, or were there any eyewitnesses who have come forward?

Deana: He was alone. The police report states two witnesses.

WW: Talk about what happened after he was stopped, leading up to his death?

Deana: He exited the vehicle and proceeded to comply with the field sobriety test as instructed to do. He was then asked to walk over to flatter ground to continue the field sobriety test, and he did that as well. When he noticed many officers surrounding him, he questioned what was going on, and what were they going to do to him? It was then that the BART [Bay Area Rapid Transit] police officer pulled him down to the ground, and they all began to wrestle with him and pile on top of him. They wrapped him in a body wrap and Tased him several times. Then he lost consciousness.

WW: Did they ever explain how BART police got involved in this traffic stop?

Deana: No, I still haven’t gotten any info on that. It was one of my questions, too.

WW: How long did it take for the ambulance to arrive?

WW: Were any family members notified at this time? When did the family hear about his death?

Deana: We were not notified. The coroner’s report stated that the police department said to not notify the family until the scene had been cleared. It also stated that there was a press hold on this case. I was calling hospitals, looking for him and ended up calling the coroner’s office, and that’s when I found out that he was dead!

WW: What did the police say to your family?

Deana: When my son and I spoke to the detective, he said that nothing on the video showed any excessive force or anything the police officers did wrong.

WW: How long did it take before the family received the coroner’s report and the police report?

Deana: I don’t recall but it wasn’t too much longer after he died. I had to physically go and get the coroner’s report. I attempted several times before I was able to obtain it, same with the police report. The police report is redacted and pages are missing, so I still have yet to receive the complete police report. I believe my attorney subpoenaed that and has since received it.

WW: Who is the family lawyer, and when did you first contact the lawyer? Did you need the lawyer to make the requests in order to get the above reports?

Deana: We met with lawyer Stan Goff early on to seek legal advice, and he took our case. A few weeks later, he recruited Fulvio Cajina, and he became our second lawyer along with Matt Haley, who is our third.

WW: When and how did you get the police bodycam footage?

WW: When did you file the lawsuit, and what can you say about the status of the suit?

Deana: It was filed right after he was killed. Trial is set for early next year.

WW: Why are you organizing events like the recent barbeque? Have you met other families undergoing similar tragedies as yours?

Deana: I am preparing to have a town hall meeting on August 20 to organize with families in Hayward about community awareness. Unfortunately, I have met with many families who have encountered the same type of loss.

Please sign the petition to demand justice for Nate.