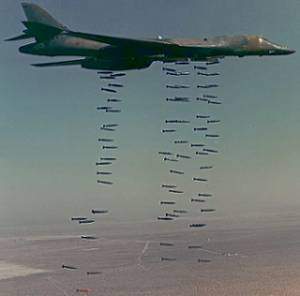 The U.S. military resumed bombing of the North African country of Libya on Aug. 1.

President Barack Obama approved the airstrikes, which were recommended by U.S. Defense Secretary Ashton Carter and Gen. Joseph Dunford, chairman of the Joint Chiefs of Staff. Although U.S. warplanes have struck before, this attack marked the beginning of a “sustained campaign.”

Western countries’ special forces teams have been on the ground in eastern and western Libya for months. In July, France said three of its soldiers had been killed south of the eastern city of Benghazi. (Reuters, Aug. 1)

Airstrikes were launched in support of the current U.S.- and U.N.-approved Libyan Government of National Accord (GNA). Their forces are supposedly trying to drive the Islamic State group (IS) from Sirte, a city halfway between Tripoli and Benghazi. Libya’s largest oil field and oil port are in the Sirte area. The struggle for control of this vital resource has been a source of continuing conflict among competing factions and militias.

There are two rival Libyan governments: the Tobruk-based House of Representatives government allied with the Libyan National Army and the Tripoli-based National Salvation Government. Many competing militias with shifting loyalties are locked in struggle for resources and territory.

Oil production in the past five years has crashed to less than 20 percent of the 1.65 million barrels pumped in 2010.

The reason given for the present bombing is that the strikes are targeting the advance of IS forces. Along with bombing Libya, U.S. forces and aircraft are bombing sites in Syria, Iraq and Afghanistan. U.S. Predator drones continue to strike targets in these four countries and in Yemen, Sudan, Somalia, Kenya, Mali, the Philippines and Pakistan.

Since the 2011 U.S. destruction of Libya, U.S. bases have been established throughout Africa — in Djibouti, Ethiopia, Seychelles, Uganda, Mauritania, and Burkina Faso. More bases are planned.

In this expanding U.S. war, deaths and injuries are uncounted and dismissed as collateral damage. Totally ignored is the trauma of the millions of people whose lives have been disrupted, their jobs lost and their schooling cut short. As displaced refugees, every shred of their security has been destroyed.

Claiming to target IS, the U.S. military command, along with an alliance of 13 other uninvited countries, have bombed Syria for more than two years. But when Russian aircraft, in response to the Syrian government’s urgent appeal, targeted the very forces the U.S. military claimed it wanted to defeat, suddenly Washington denounced the strikes, claiming that U.S.-backed “democratic opposition” forces were being hit.

Presidents George W Bush and Obama claimed that no congressional approval is needed for these endless, undeclared acts of war. Supposedly, the Authorization for Use of Military Force legislation that was rammed through Congress in 2001 gives presidents the authority to bypass the Constitution.

In the past 15 years, U.S. imperialism has bombed 14 countries, always claiming to be fighting al-Qaida, IS or other “shadowy” terrorists.

The U.S./NATO war on Libya in 2011 was directly responsible for the chaos and devastation in Libya today. For more than seven months, from March to October, U.S. aircraft targeted Libyan cities and its modern infrastructure.

Before that war, Libya was the most modern country in Africa. U.N. figures show it had the highest standard of living — measured by life expectancy, education level, health care, diet and housing. Well-designed cities along the Mediterranean Sea —Tripoli, Sirte, Benghazi, Misrata and Tobruk — were designed with blocks of modern apartments, wide boulevards and plazas as well as beautiful hotels, cultural centers and schools.

This development was possible because Libya broke free of Wall Street domination. Following the 1969 revolution that overturned the corrupt U.S.-British-supported monarchy of King Idris, Libya nationalized its rich oil and gas deposits. Libya asserted sovereignty over its resources and invested in complex pumping, container and port facilities.

Libya is a largely desert country; only 1 percent of the land is arable. More than 80 percent of the population live on a thin 1,200-mile coastal strip of land along the Mediterranean Sea. In the world’s largest water development project, Libya tapped the underground aquifer and built an underground river to provide irrigation to new farmland and industries and to bring potable water to its growing cities.

The government subsidized development projects in some of the poorest African counties. Hundreds of thousands of workers throughout the continent found employment in Libya’s infrastructure development and oil fields.

When U.S., French, British and Italian imperialists began their bombing campaign, Libya had announced a bold venture to underwrite an African currency with more than 143 tons of gold reserves held in the Central Bank of Libya. This independent development was threatening to Western imperialist banks and oil and gas corporations.

For 42 years, Libya survived and prospered, despite decades of U.S. sanctions. Every construction project was a challenge. Continual sabotage, assassination attempts, media demonization and destabilization efforts went on. But, as a still developing African country, Libya could not withstand more than 26,500 bombing sorties — over 120 sorties per day for seven months.

IS: battering ram against sovereignty

IS has gained a foothold in Libya due to the chaos that U.S. imperialism created there and throughout the region. Every social and political institution was destroyed. Aerial bombing was carried out while weapons and large amounts of cash and bribes were liberally spread around.

Death squad militias assassinated hundreds of government officials and political leaders. Tens of thousands of government loyalists and supporters of the Jamahiriya or Green movement were rounded up and imprisoned in detention camps. The worst abuse and purges were aimed at Black Libyans and Sub-Saharan African workers.

The existence of IS in Iraq, Libya, Syria and elsewhere is caused by U.S. war and imperialist policies of instigating sectarian hatred, racism and ethnic divisions.

This tactic has been used frequently since Washington armed and funded extremist groups against the socialist-oriented revolution in Afghanistan in 1979.

Before U.S. wars, these fanatical forces had no roots or any social basis in these countries. It is now U.S. policy to rely on these reactionaries as a battering ram to break down all forms of national sovereignty and all secular and progressive states.

Secretary of State Hillary Clinton took credit for making the call to go to war in Libya. When informed of Gadhafi’s brutal lynch-mob execution in Sirte, she clapped her hands, laughed and told a reporter in front of a camera, “We came, we saw, he died.” (CBS News, Oct. 20, 2011)

A WikiLeaks cable in 2012 quoted an email with Secretary Clinton writing, “Arming Syrian rebels and using Western airpower … is a low-cost, high-payoff approach.”

IS forces have recently been pushed back in Syria and, according to U.S. media reports, also in Libya. Increasingly, reports say that Libya’s Jamahiriya movement is reasserting itself in the small, ruined, oil cities of the desert south and in the coastal cities.

In April France 24 News reported that Saif Al Gadhafi, Moammar Gadharfi’s son, was released, not executed. There is speculation that this reprieve was based on fear of the re-emerging movement.

Pro-Gadhafi demonstrators were fired on by IS fighters in Sirte, though the city is in the hands of IS militias. In the capital of Tripoli and other cities, masses of people who supported Gadhafi’s government are reorganizing.

These reports in Middle East Eye, RT News, AlterNet and other sources raise the question of who U.S. imperialism is really targeting in Libya, as it opens up a sustained campaign.

Unity and reorganization in Libya will be a difficult process after such a brutal assault. But the first step is the population learning — unfortunately, through bitter experience — that U.S. bombs, drones, secret ops and mercenaries are incapable of providing peace, stability or security.