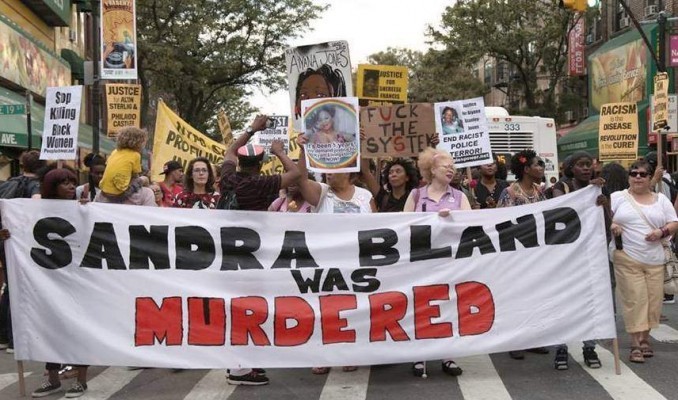 July 18 — Outrage over the unchecked police killing of people of color continues throughout the U.S. Militant protests surged in July after Alton Sterling in Louisiana and Philando Castile in Minnesota were killed by cops. According to the Washington Post, Castile was the 123rd Black person killed by police in the U.S. during 2016. Despite attempts to demonize and criminalize the Black Lives Matter movement after police were shot in Dallas and Baton Rouge, La., the BLM movement is marching on, with growing community, labor and multinational support.

The Baton Rouge community where Alton Sterling was killed by cops on July 5 is under siege by militarized police. The Black working-class community continues to resist. Marie Flowers, at neighborhood protests with her 12-year-old son, said, “Black boys are being killed and this is just the culmination of what has been going on for decades.” (tinyurl.com/hwtkmk7)

Following the influx of Black New Orleans residents after Hurricane Katrina in 2005, the Baton Rouge police “were under orders to be so hard” that evacuees would not settle in the city. Local cops were later publicly exposed as “engaging in racially motivated enforcement, physically abusing prisoners, and stopping, questioning and searching people without any legal justification.” (Times Picayune, July 6)

On July 10, police attacked people who were peacefully protesting Sterling’s death, ordering them to disperse but then preventing them from doing so. According to a recently filed American Civil Liberties Union suit, the cops “used excessive force, pointed live automatic weapons at protesters, arrested legal observers and journalists without probable cause, and subjected protesters to indiscriminate mass arrest — all to intimidate them from protesting excessive force in the future.” (tinyurl.com/zydpbon)

When protesters took shelter at a private home, invited by the woman living there, a squad of cops in SWAT gear invaded to arrest them. The National Lawyers Guild has raised $300,000 for bail support and defense of more than 200 arrestees over the past weeks.

On July 15, Sterling’s memorial was held at Southern University, a historically Black college. Hundreds of community people came to pay their respects. Speakers included the Rev. Jesse Jackson and the Rev. Al Sharpton.

Two days later, a lone African-American gunman killed three Baton Rouge cops and wounded three others in an ambush. This act can only be viewed in the context of the systematic implementation of racist policing and state terror in Baton Rouge, in the South and throughout the U.S.

Sixty-five people were arrested in a Baltimore anti-police violence protest for Black Lives Matter after they blocked I-83, the Baltimore Expressway, on July 16. Ten of those arrested were under adult age. As of July 18, 23 people were still in jail. Members of the Baltimore People’s Power Assembly were part of the protest. Demands included reallocating money from the police to community programs.

The People’s Power Assembly militantly protested in Brooklyn, N.Y., on the one-year anniversary of the death of Sandra Bland. The 28-year-old Black woman was stopped for a minor traffic violation in Waller County, Texas, and three days later was found hanging in a jail cell there. The protesters powerfully cried out for “Justice for Sandra” by chanting: “The whole damn system is guilty as hell! Indict, convict, send those killer cops to jail!”

The demonstration emphasized how many women of color, including queer, trans and gender nonconforming women, die at the hands of police. Besides Sandra Bland, some of those killed include Shantel Davis, Aiyana Stanley-Jones, Kindra Chapman, Kyam Livingston, Yvonne McNeil, Shereese Francis, Rekia Boyd.

Black Lives Matter is occupying Los Angeles City Hall. Since July 12, from 50 to 100 people have camped out day and night on the steps of the building. They refuse to leave until the group gets a public meeting with the mayor or until the chief of police is fired. BLM protesters occupied the steps immediately after the city’s Police Commission ruled that the 2015 Los Angeles Police Department killing of 30-year-old Redel Jones did not violate departmental “deadly force rules.”

The occupation is receiving firm solidarity from the Brown Berets and many white supporters. The South Central Neighborhood Council, a city entity, unanimously passed a resolution in support of the BLM occupation. A key participant in the BLM occupation is a member of the African-American caucus of SEIU Local 721, Southern California public service workers.

In addition to the occupation, 5,000 people marched in support of Black Lives Matter in the city of Inglewood in Los Angeles County on July 10.

Protests in support of Black Lives Matter are resisting police terror in Wisconsin, a state with some of the worst conditions internationally for Black, Brown and Native peoples.

On July 11, the youth- and student-led organization Freedom Inc. held a “Rally for Community Control over Police” at the Dane County Police Department. The youth were there to denounce the decades-long oppression and occupation of Black and Brown communities in Madison. In support were the Young Gifted and Black coalition and other labor and community groups.

The multinational protesters demanded the firing of killer cop Matt Kenney, who murdered two residents “in the line of duty.” Most recently, on March 6, Kenney killed 19-year-old Tony Robinson, resulting in mass protests throughout the city. Kenney is still on active patrol duty and training other cops.

Another protest demand was to take money budgeted for jails and prisons and redistribute the funds for jobs and community needs such as recreation centers. After a street protest, participants occupied the police department lobby and blocked the doors for hours to make their demands heard.

Also on July 11, the Coalition for Justice in Milwaukee sponsored a powerful “We Will Never Stop” rally at Red Arrow Park, followed by a march through the streets. Speakers included the family of Dontre Hamilton, killed by cop Christopher Manney in 2014, and the family of Jay Anderson, killed by a Wauwatosa police officer in June.

The rally denounced police terror in Milwaukee and nationwide. Signs demanded justice for Alton Sterling, Philando Castile and others killed by cops. Other signs called for disarming the police, solidarity with the Black Lives Matter movement, and building worker and people power.

After the speak-out, hundreds of protesters poured into the streets in righteous rage against the Milwaukee police and Wall Street forces responsible for apartheid-like conditions of people of African descent in Wisconsin. Future Black Lives Matter-related events in Wisconsin include a “March For Awareness” on July 31 at Library Mall in Madison.