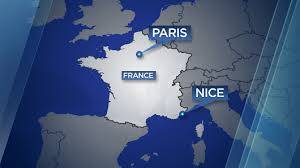 More than 100,000 people were at a Bastille Day fireworks display in Nice on the French Riviera July 14 when a truck was driven through the crowd, killing 84 people on France’s national holiday. This was so shockingly unexpected and so extensively covered that politicians throughout the world immediately deplored it.

The terrible event in Nice was just one example of the human suffering inflicted on people around the world in recent months — much of it caused by U.S./NATO aggression and subversion and the general atmosphere of violence generated by such wars.

Most of this gets little publicity in the corporate media or reaction from politicians in the West. For example, in early June, the Pentagon provided air power for the Iraqi government’s recapture of the city of Falluja from the Islamic State group. During those battles, some 10,000 people who escaped the city went without food and water, while another 50,000 were trapped inside while Falluja was systematically destroyed yet again. Then another 250 Iraqis were killed by car bombs.

Another example is the civil war in South Sudan, a country that only exists because imperialist powers — the U.S. first in line — broke up Sudan into two parts. Their goal was to exploit the South’s natural resources more effectively — especially oil — and to keep China out. Since December, South Sudan has been in a civil war that has created another million refugees.

During this period, the deaths of migrants on the high seas have continued to take a grim toll of children, women and men, sometimes whole families, trying to escape the wars.

Then came the highly publicized horror that took place in France on July 14. Within two days, the phone number in Nice set up to provide psychological counseling and guidance to those impacted by this attack had received 14,000 calls and 1,200 emails.

This atrocity, however, was carried out by an individual, apparently with little planning, and had no political demands attached, yet all the imperialist politicians are handling it as political “terrorism.” They pose as able to stop such attacks.

French President François Hollande spoke on national television a few hours after the attack. He called it “an attack whose terrorist character could not be denied” and added that all France was “under the threat of Islamic terrorism.”

That evening, on France’s most watched news show on France 2, Prime Minister Manuel Valls called the driver of the truck a “terrorist” who was “without doubt linked to radical Islam.” Then he added that an investigation should be done to confirm this charge.

But when at the exact same time Bernard Cazeneuve, the minister of the interior in charge of the national police, the gendarmerie and much of French intelligence, was asked on TV station TF1 if the driver “was linked to radical Islam,” he answered, “No.”

Later the administration tried to resolve the discrepancy among its spokespeople by inventing the expression “rapid radicalization.” This supposedly explained how the driver was a terrorist without being linked to terrorism.

Hollande had announced before Nice that he was going to let the state of emergency expire. After Nice, he announced an extension for another three months, a call-up of 10,000 soldiers for police duties and recruitment of more gendarmes. This new ruling allows cops to search without a warrant and impose house arrests at will.

The right and ultra-right parties had already seized on the loss of public support for Hollande and Valls, who have been in a months-long struggle with labor unions over a new anti-worker law, to open up broad attacks on the ­government.

The Republicans (LR) of former president Nicolas Sarkozy are playing on the understandable fear caused by these incidents to attack the government and call for more repression. Sarkozy called for electronic bracelets for everyone the government puts on a watch list, deportations of foreigners on such lists, closing mosques the cops don’t like, etc. (AFP, July 17)

The National Front (FN), the semi-fascist party of Marine Le Pen, tried to go even further to the right. She called for more spending on the military, progressively increasing military service, banning Muslim organizations and closing hundreds of mosques and prayer houses. She wants to expel imams whose teachings she doesn’t like.

Donald Trump also thought he could get some advantage from the attack in Nice. He said he would ask Congress for a declaration of war on the Islamic State group. In a July 14 interview on Fox News, Trump used the attacks to reiterate his call to ban Muslims from entering the U.S. and to “get tough, very tough.”

The rightist politicians all talked tough, without demonstrating how, in a world consumed and terrorized by ­imperialist war, violence can be ­eliminated.