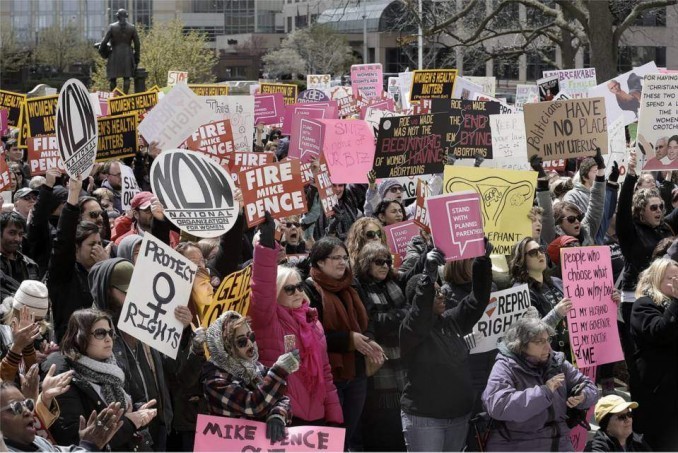 During his pursuit of the Republican nomination, Donald Trump denounced the Koch brothers, the far-right capitalist moguls whom he accused of pulling his rivals’ strings. But, no surprise, he totally reversed himself on July 15 by choosing a Koch brothers’ puppet for his vice presidential running mate.

Gov. Mike Pence of Indiana has a longtime relationship with the reactionary multibillionaire Kochs, who head a vast energy empire that is the second-largest privately owned company in the U.S., with revenues of $115 billion in 2013. These libertarians oppose “big government,” except for laws that protect and promote their enormous stolen wealth (obviously, they deny climate change) and that restrict progressive legislation.

By choosing Pence, Trump exposes his willingness to cozy up to the Kochs. Who knows, he might need their vast resources to try to buy the election. Even though they have opposed Trump up to this point, they may now support him — to leverage control over Pence and, ultimately, over Trump.

Clearly, Trump chose Pence to shore up his conservative, evangelical credentials. Pence, whom the July 17 New York Times called “a loony lightweight” during his 12 years in Congress, is one of the most conservative, ostentatiously religious U.S. politicians. None of the 90 House bills he proposed has passed.

Both the AFL-CIO and the Working Families Party describe him as an enemy of working people. He voted against raising the minimum wage, expanding health coverage for poor kids, increasing funding for subsidized housing and prohibiting job discrimination against LGBTQ people. He supported deporting undocumented children and eliminating automatic citizenship for children born in the U.S. to undocumented parents. His vote to build a fence at the Mexican border is one of the few positions he shares, besides racism, with Trump!

His actions restricting women’s and LGBTQ rights show what a misogynist bigot he is. Pence signed laws in Indiana forcing women to undergo unnecessary ultrasounds, banning abortion coverage in private insurance plans and restricting abortion based on laws the Supreme Court recently struck down. In March, he signed a law preventing women from obtaining an abortion because of the race, gender or disability of the fetus, and making doctors liable for performing such abortions — one of the most far-reaching bans in the country. A judge blocked it from taking effect after the court decision.

In 2011, Pence pushed an amendment through the House to defund Planned Parenthood, kick-starting similar state actions. After Pence became governor in 2012, Indiana cut Planned Parenthood funding in half from 2005 levels, forcing the health care group to close five clinics providing testing for sexually transmitted diseases, though not providing abortions. Soon, a county with one of the closed clinics became the hub of an enormous HIV outbreak.

Not only has Pence been hostile to same-sex marriage since 2003, but in Congress he voted against laws prosecuting hate crimes based on sexual orientation, as well as against the repeal of the Pentagon’s “Don’t Ask, Don’t Tell” policy. In March 2015, Pence signed a so-called “religious freedom” bill permitting business owners to refuse service to LGBTQ customers and others due to their religious beliefs. It was only after a national protest from business and civic leaders, athletes and celebrities that Pence relented, essentially killing the bill.

No wonder the National Organization of Women calls him “a ruthless general in the war on women.” Mike Pence’s many crimes against working and oppressed people make him Trump’s perfect running mate.

Sources: July 14 articles in Mother Jones and The Nation and a July 16 NOW press release supplied background for this article.