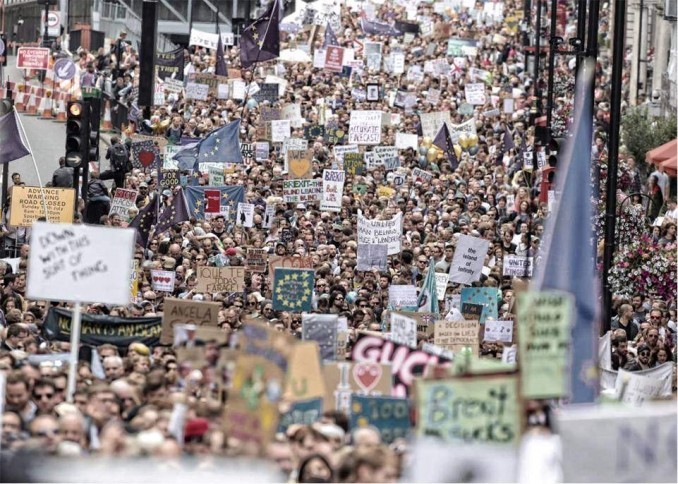 Since the right-wing of Britain’s Conservative Party, together with the even further right United Kingdom Independence Party, initiated a referendum mandating that Britain leave the European Union, the capitalist media generally have spun the victory for “Brexit” as evidence that white workers in Britain are afraid of and hostile to immigrants.

This certainly must be true of some, who were bombarded with the most vicious and false anti-immigrant propaganda before the vote, in the same way that the constant drumbeat in this country’s tabloids and talk radio blaming immigrants for the layoffs and plant closings has panicked some white workers here to be for billionaire Donald Trump.

But this is not the whole story. There is a healthy rejection of immigrant bashing and racism in both countries. It can be seen in the U.S. in the large numbers of young whites who have joined the Black Lives Matter movement to protest killings of Black and Brown people by police.

In Britain, the news that hasn’t been picked up by the U.S. media is that 200,000 people joined the Labour Party in the two weeks after the referendum. And they mostly joined in order to support the leadership of Jeremy Corbyn, who opposed the anti-immigrant campaign but then was censured by Parliamentarians in his own party. They charged that he couldn’t lead the party to victory in the next general election.

These politicians who hold down seats in Parliament don’t really represent the membership of the Labour Party. This was shown yet again when the rank-and-file members of the party then voted in their local constituencies to support Corbyn.

This comes from an online journal put up by the Red Flag group in the Labour Party: “The attempted coup launched by Labour’s parliamentary rebels has failed to oust Jeremy Corbyn — but it has provoked a renewed membership surge.

“Figures confirmed by the New Statesman show 200,000 people have joined the party in the last two weeks, taking total membership to 600,000. Labour is now the biggest it has been for 50 years and the biggest left party in Europe. …

“Right wingers have been joining too, but the heirs to Blair who lost the 2010 and 2015 elections have been completely outmatched by the mass of people joining who want to see a new kind of politics.” (redflagonline, July 7)

This refers to Tony Blair, a former prime minister of Britain from the Labour Party, who went along with George Bush’s war against Iraq and also carried out austerity attacks on the British workers. He has just been exposed by a special commission as having knowingly accepted Washington’s lies about “weapons of mass destruction,” which Iraq never had, but which were used as the excuse for going to war against that oil-rich country.

These developments could lead to a renewed struggle by workers in Britain, whatever their national origins, religion or language, to overcome the negative aspects of Brexit and unite to beat back the bosses’ plans for austerity and further job cuts.