It is rare that something positive for the working class comes from an imperialist government’s report. So there is some surprise that the British government’s inquiry known as the Chilcot Report has established that former Prime Minister Tony Blair lied, ignored warnings and twisted arms to push his government into invading Iraq in March 2003.

The report, published July 6 after seven years of painstakingly slow research and procrastination, contains 2.6 million words — about 25 times that of the average novel. 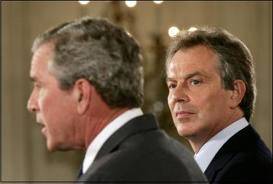 As demonstrators in London pointed out, the report means that Blair should be tried as a war criminal. Of course, it also means that former U.S. President George W. Bush, former Vice President Dick Cheney and a bunch of other U.S. top politicians are even bigger war criminals. They committed the greatest war crime of all against Iraq: unleashing a war of aggression.

It was the Bush-Cheney administration, using the attack of Sept. 11, 2001, as a pretext to mobilize the U.S. for war, which led the U.S.-British alliance into battle. Blair was their toady across the pond. In a memo in July 2002 he wrote to Bush, “I will be with you, whatever.”

The Bush administration lied more than 900 times in the closing months of 2002 to try to justify war against Iraq. Chief liars were Bush and Secretary of State Colin Powell. Without United Nations’ or even NATO’s blessing, the U.S.-British alliance finally invaded Iraq and occupied the country, destroying its infrastructure and making all its former officials and key managers outlaws. Later NATO came on board.

The occupiers faced a determined Iraqi resistance movement through 2004 and 2005. To weaken the resistance, the U.S.-British occupiers exacerbated religious and ethnic differences among Iraqis. Between imperialist repression and sectarian warfare, over 1.5 million Iraqis died, and the country was in ruins, with thousands of GIs dead or maimed — all the fault of Bush-Cheney-Blair aggression.

In March 2003, the majority of the U.S. ruling class went along with the attack on Iraq, and so did the establishment media, the New York Times, the Washington Post and the big cable and broadcast networks. They all chose to believe Bush’s promises of an easy and profitable victory. None of this was true.

The Chilcot Report reflects the ruling class’s disappointment with the unkept promises. It will be useful only to prove to any who might still doubt it that Blair is guilty as charged, as are Bush and Cheney. In summary, Sir John Chilcot’s inquiry shows that the Iraq War, a six-year conflict for Britain, was unnecessary and disastrous, and that Blair exaggerated the threat posed by Saddam Hussein and his alleged “weapons of mass destruction.”

Families of some of the 179 British military personnel killed in the war have described Blair as a “terrorist.” In the July 8 Guardian, a British newspaper, Simon Jenkins wrote, “Blair emerges as other Iraq historians have already portrayed him, as a pathetic and self-regarding figure in awe of the transatlantic power.”

It is satisfying to know that the people of Britain are condemning Blair. The anti-war movement there knew of Blair’s war crimes for over a decade, but now ­everyone knows and no one can deny it. The exposure comes at a good time, as it implicates Blair’s allies in the right wing of the Labour Party. It opens a path for the current, more leftist Labour Party leader, Jeremy Corbyn, to attack his rightist enemies as complicit in Blair’s crimes.

Whatever happens to Blair, there remains a bigger job for the anti-war movement in the U.S. That is to use the Chilcot Report in the best way possible to expose the war crimes of Bush and Cheney and put them on trial.