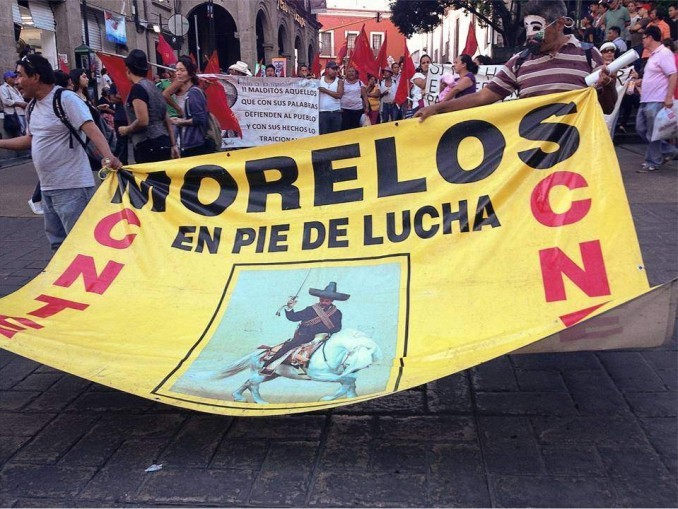 Morelos, Mexico, July 10 — Many public schools in the Mexican states of Oaxaca, Guerrero, Chiapas, Tabasco and others will remain closed tomorrow even though the school year has not ended. The real education will take place in the streets of Mexico, where teachers, parents and other supporters continue their strike against the privatization of public education.

On July 11, thousands of members of the CNTE (Coordinadora Nacional de Trabajadores de la Educación), which has a membership of over 200,000 teachers, will march in the capital, Mexico City, to demand an end to so-called “educational reforms” that will in effect lead to privatization and the end of public education in Mexico.

The CNTE, a radical alternative to the official teachers’ union, the SNTE (Sindicato Nacional de Trabajadores de la Educación), has rejected President Peña Nieto’s demand that all teachers take a national exam in order to keep teaching. According to the CNTE, this evaluation is punitive, costly and has nothing to do with changing the educational system. In addition, like in the United States, students are now forced to take costly standardized exams. Parents are being forced to pay for school supplies, books and exams. Each “public school” now requires parents to give up at least one day’s pay per year for their child’s education. Parents are mandated to pay a fee or work at the school cleaning, painting or doing other tasks. For most parents in Mexico, these educational “reforms” are impossible to meet.

On June 19, the police opened fire on a group of protesters supporting striking teachers in the southern state of Oaxaca. Oaxaca’s people have a long history of organizing to overturn the privatization of public services. Twelve protesters were killed by the police and at least 100 injured, although the government denies using bullets. (The Mexican government lives in a state of denial.) A number of leaders of the CNTE have been incarcerated for several months.

According to Jonathan Ackerman, a political analyst from TeleSUR, “We have, on the one hand, our completely unarmed, peaceful teachers, who are defending their jobs, who are defending the tradition of humanist critical education in Mexico, and on the other hand, the government, which is doing everything possible to impose a so-called education reform on these teachers.”

The CNTE and the communities in Oaxaca, Chiapas and other states have responded by calling an indefinite strike until the Mexican government and its secretary of education (SEP) enter into a dialogue with striking teachers. In the first week of July, hundreds of roadblocks were set up by teachers, parents and their supporters in Mexico City, Oaxaca, Chiapas and other areas. The response of the state continues to be one of repression against the teachers.

In addition, the government has waged a disinformation campaign from the beginning of the teachers’ struggle, attempting to turn the population against the teachers. However, the recent massacre of unarmed demonstrators in Oaxaca, the indefinite incarceration of CNTE leaders and the exposure of government lies about the teachers are breaking through the government’s plans. One day, the SEP announces that it will pay reparations to the families of the murdered protesters. The next day, it withdraws the offer. SEP says it will meet with the CNTE and then refuses. The parents of Mexican public school students, particularly in the impoverished states of Oaxaca, Guerrero, Chiapas and Michoacán, have allied themselves with the striking teachers.

This week, the Zapatistas of Chiapas (EZLN) announced full support for the teachers and are donating 10 tons of food to the struggle for justice. Many unions and communities of Indigenous people have joined the picket lines, the blockades and the marches, despite the ultimatum of Interior Minister Miguel Ångel Osorio Chong that they must dismantle the struggle or else.

The CNTE has called for a large protest in Mexico City on July 19, exactly one month after the massacre in Oaxaca. Teachers will drive in convoy from Oaxaca and other areas starting on July 17 before a massive convergence in the capital.

The union will continue its indefinite strike until it wins changes from the government. International solidarity by teachers’ unions and others in the U.S. and around the world is needed for this important struggle.