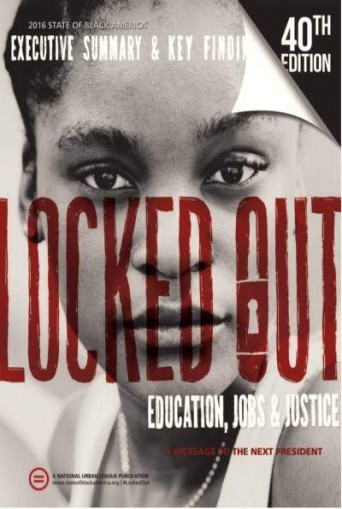 In its 2016 report on the “State of Black America,” the National Urban League, one of the oldest research organizations in the African-American community, documents continuing levels of national oppression and economic exploitation.

“Locked Out: Education, Jobs and Justice” is the title of the 40th annual study by the NUL, which began this work in 1976.  It  provides much evidence to show that African Americans remain an oppressed nation within the political and economic clutches of Washington and Wall Street.

Additionally, the report discusses the impact of the Great Recession in the United States on the African-American population.

Despite the advent of the first African-American president, Barack Hussein Obama, the fundamental problems facing at least 45 million people are still unresolved 151 years since chattel slavery’s abolition and the Civil War’s end.

The study uses an “equality index,” which found that African Americans do not have full equality, but actually have only 72.2 percent of what white people possess. Also, it is necessary to take into account systematic national discrimination imposed on this population through denial of economic and social opportunities. There are potential pitfalls in using this “equality index” framework due to class divisions among African Americans. However, this measurement acknowledges the disparities that have remained throughout the decades.

What is striking about NUL’s findings is the degree to which the social conditions of African Americans have remained essentially unchanged. This stagnation has continued through successive Republican and Democratic administrations. This conclusion does not discount or minimize gains made over the last four decades, particularly in educational achievements.

The report says: “Eighty-six percent of African Americans are high school completers; the share with a bachelor’s degree or more has more than tripled (from 6.6 percent to 22.2 percent); and roughly one-third of 18-24- year-olds are enrolled in college.  While whites have increased college enrollment faster than Blacks between 1976 and 2014, the college completion gap has narrowed 20 percentage points … (from 43 percent in 1976 to 63 percent in 2014).”

Nevertheless, in essential areas such as job acquisition and retention, unemployment rates among African Americans are twice as high as whites, as in 1976. This is during a so-called recovery! These figures reflect the elimination of millions of industrial jobs, which then has had ramifications in education and public service sectors and consumer viability.

The NUL says “despite notable absolute progress for Black America, there has been much less relative progress towards economic equality with whites, especially when compared to the progress made toward educational equality.  … The Black unemployment rate has consistently remained about twice the white rate across time and at every level of education.  Compared to 40 years ago, the income gap has remained basically unchanged (now 60 percent), and the homeownership rate gap has actually grown 6 percentage points (now 59 percent).”

An important area in assessing African Americans’ quality of life is homeownership. The NUL emphasizes: “The foreclosure crisis has left Black homeownership rates at approximately the same point they were in 1976, while the white homeownership rate is now 5 percentage points higher.  [But] there has been slow, but ongoing progress in reducing poverty, in spite of the … Great Recession.  … The Black poverty rate is now 2.4 percentage points lower than in 1976 (down to 27 percent from 29.4 percent).”

Well over one-quarter of African Americans are still impoverished. Aggravating this data on poverty is the high jobless rate, which could easily imperil the households of those not designated as impoverished.

In 2014, a survey indicated that nearly half of U.S. residents were either living in poverty or close to it. “This is based on the Census Department’s Relative Poverty Measure. … The Economic Policy Institute uses the term ‘economically vulnerable.’  With this standard, 18 percent of [U.S. residents] are below the poverty threshold and 32 percent are below twice the threshold, putting them in the low-income category.” (Paul Buchheit, Alternet, March 23, 2014)

The highest rate of African-American unemployment is in Illinois.  Concentrations of poverty, inequality and joblessness exist in Chicago.

This report provides much hard data necessitating a critical look at the lack of progress made during Obama’s administration.  African Americans voted overwhelmingly for Obama in 2008 and 2012, securing his terms in office.

Unemployment rates in Illinois, the area from which Obama emerged politically, expose the futility of an electoral agenda which lacks substantive demands based on conditions facing the working class and poor.

These statistics pose a challenge for mass organizations, which must continue to put forward political programs calling for real jobs, decent housing, quality education and economic parity. Irrespective of who is next elected to the White House and Congress, oppression and exploitation will not wither away.

Joy-Ann Reid, a MSNBC correspondent, predicts in an article in the NUL  report: “Whether the next president is a Democrat or Republican, Black leadership will likely be pressed as never before to deliver on the ‘hope ﬂoor’ laid by the election of the ﬁrst Black president. … In short, the ‘Age of Hope’ is poised to give way to the ‘Era of Radical Demands for Change.’”

To be effective, radical demands for change must take on an anti-capitalist character. There is a drastic need for the redistribution of wealth from the ruling class to the working class and the nationally oppressed. This transfer of wealth can only occur under a socialist system which guarantees full employment, income equality, housing and education for everyone, along with the total liberation of African Americans and all oppressed nations.