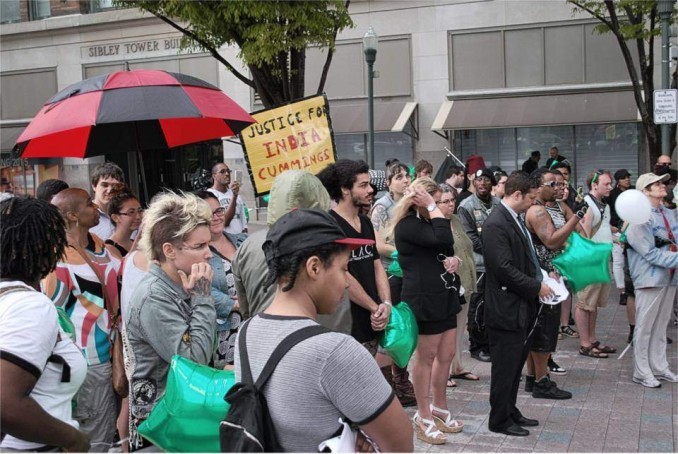 Rochester, N.Y. – Protesters took over downtown streets during rush hour here to protest the death of India Cummings, who died in police custody in Buffalo, N.Y., in February. “India Cummings! Remember my name!” chanted protesters as they blocked intersections on May 24 and shut down the Rochester Transit System Bus Terminal for nearly two hours.

The demonstration followed a rally at the Liberty Pole, which was interrupted by a torrential downpour. The demonstration was organized by the Black Panther Party of Rochester and BLACK (Building Leadership and Community Knowledge), an organization of African-American youth. They were joined by several other local community organizations including Workers World Party.

Cummings, who has roots in Rochester, was taken to an emergency room with cardiac arrest and showing signs of extreme trauma: a skull injury, bruises, life-threatening blood clots, broken ribs and severe dehydration. An investigation into the matter by the New York Commission of Corrections has so far revealed nothing, and family lawyers have been stonewalled at every turn by the Erie County District Attorney’s office.

Matthew A. Albert, who is representing the Cummings family, said that Cummings “went from physically healthy to dead in three weeks. … Ultimately, what we want is accountability. … The silence is intolerable.”

“We want to draw attention to what happened. Sadly, these things happen everywhere,” said Tanya Noel, a leading organizer of BLACK. “Agitate, organize, educate. It’s to get people together to begin the education and organization that’s necessary.” (Democrat & Chronicle, May 26)