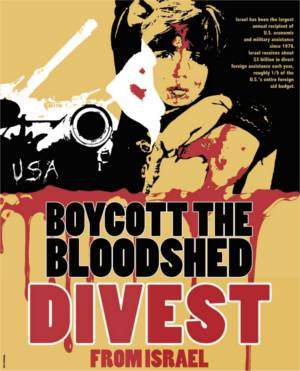 Before marching in the annual “Celebrate Israel” parade in Manhattan on June 5, New York Gov. Andrew Cuomo signed an executive order requiring public agencies controlled by his executive branch to divest from companies and institutions that “participate in boycott, divestment, or sanctions activity targeting Israel.”

The order, announced to a beaming crowd of Zionist leaders and business executives at the elite Harvard Club, also requires the commissioner of the Office of General Services to compile and maintain a list of targeted entities.

“Cuomo’s action has the ugliest attributes of McCarthyism: identifying organizations that engage in speech we dislike and ‘Let’s blacklist them,’” Baher Azmy, executive director of the Center for Constitutional Rights, told the Associated Press. “This is a well­-orchestrated, well­-funded, organized strategy to disproportionately punish U.S.-based activists. Really ugly.” (AP, June 5)

The Boycott, Divestment and Sanctions movement, launched by Palestinian organizations in 2005, continues to expand in its tenth year, driving corporate giants like Veolia, Orange, CHR International and G4S from the Israeli market; pushing Israeli enterprises, including SodaStream and Ahava, out of the occupied West Bank; and winning campaign victories.

The BDS movement demands that Israel end its occupation and colonization of all Arab lands and dismantle the “Apartheid Wall” in the West Bank, extend full equality to its own minority of Palestinian citizens and allow the return of Palestinian refugees ethnically cleansed from their homes.

But it is not immediately clear who his order, which mentions only public investments in entities that support BDS, might actually affect. None of the companies that have changed their policies following massive campaigns have acknowledged the role of BDS, much less endorsed it.

Gilad Erdan, Israeli public security and strategic affairs minister, railed that “BDS was a factor in the decision of security company G4S to sell their operations in Israel.” However, the British-Danish security conglomerate, a contractor with Israeli prisons and occupation forces, demurred, preferring to cite “strategic and commercial grounds” for its decision.

The company’s claim has an element of truth. BDS has always sought to impact its commercial targets by impacting negatively on their bottom lines, that is, lowering their profits, rather than through moral appeals. And organizations whose support it has sought and won, like the United Church of Christ and the United Electrical Workers, have no stock to buy or sell.

While time will tell, Cuomo’s order reads as if it had been carefully drafted to avoid any practical consequence, including an inevitable legal challenge on constitutional grounds.

But political grandstanding or not, Cuomo’s action joins a growing raft of measures by Israel and its allies to repress a global surge of solidarity with Palestinians.

French courts have convicted a series of BDS activists on grounds of “discrimination,” with four in the city of Toulouse currently facing charges for distributing flyers encouraging the boycott of Israeli goods.

While Cuomo snickered on Sunday that passing legislation can “often be a tedious affair,” nine states, as well as Nassau County, New York, have enacted anti­-BDS bills over the past year. These measures range from rhetorical denunciations of the movement to attempts to impose policies against it like Cuomo’s, with similarly unclear results.

Last month, BDS co-­founder Omar Barghouti announced that Israel had refused to renew his travel document, imposing an effective travel ban on him.

“Having lost many battles for hearts and minds at the grassroots level, Israel has adopted since 2014 a new strategy to criminalize support for BDS from the top,” Barghouti told the New York Times June 5 after Cuomo’s announcement.

And over recent months, the movement’s website, bdsmovement.net, was hit with a series of Distributed Denial of Service attacks that online security firm eQualit.ie described as having “a level of sophistication and commitment not generally seen.”

“These latest cyber­attacks against BDS seem to be part of a full-­fledged Israeli war on the movement that includes McCarthyite legal repression, use of intelligence services and yet more funding for ‘brand Israel’ propaganda,” Mahmoud Nawajaa, general coordinator of the Palestinian BDS National Committee, said in a statement on June 2.