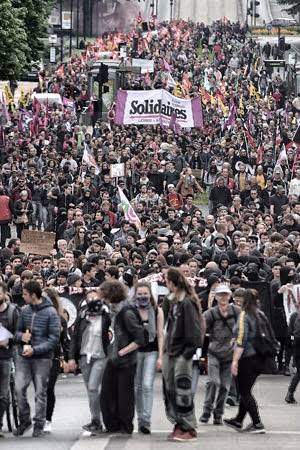 Some 220,000 workers hit the streets May 17, with thousands more on picket lines, blockading fuel depots and occupying refineries in the ongoing battle against the new anti-labor law. The French government used a rarely invoked feature of the French constitution to force the reactionary law through the National Assembly on May 10 without a vote.

Over 400,000 workers came out on May 19 to protest the law. These are the sixth and seventh national demonstrations against the regressive labor law in the past two months.

The demand of the workers is simple: They want the new labor law completely withdrawn.

Six refineries out of eight are occupied, and most fuel depots in the north and west of France are blockaded. Major ports like Nantes-Saint Nazaire and Rouen on strike, with other ports shut down. Truck drivers, who have particular grievances over working conditions, are still out.

Even though the workers’ struggles have caused disruptions and aggravations for the population, 70 percent of the people in France still oppose the law, according to the General Confederation of Labor (CGT).

The refinery occupations and fuel depot blockades, along with blockades truckers had erected on the roads, have led to major shortages in fuel supplies for cars and trucks. This involves not just gasoline but also diesel fuel, which is used much more in France for both cars and trucks than in the U.S. According to figures as of May 22 from the Ministry of Transportation, 1,612 gas stations out of 12,000 in France are totally or partially dry.

Most of the dry gas stations are in the north and west of the country.

When Prime Minister Manuel Valls was asked what his government was going to do about fuel running short, he mentioned the 90-day supply the French government keeps in emergency stockpiles. When Alain Vidalies, the secretary of state for transports, was asked about the same problem on May 22 on the main evening news program on French TV2, 20 Heures (Eight O’Clock), he said that before touching the emergency fuel, the government would use “the forces of public order” to clear the blockades, but would stay away from the refineries.

The May 19 protests took place throughout France. In Nantes, the representative of the national government for the area invoked the state of emergency, which has been extended to November, to ban the demonstration scheduled for May 19. Still thousands of people showed up and “played cat-and-mouse with the cops for a few hours, risking six months in jail and a 7,500-Euro fine.” Sixty-six people were arrested. (Agence France Presse, May 20)

In Paris, 10 people described as “militants” were prohibited from protesting, but they went to court, and most of them were allowed to join the protest.

The seven unions that have been active in fighting this law — the CGT, Workers Force, Unitary Union Federation, Solidarity, National Union of French Students, National High School Union and the Independent and Democratic Federation of High Schools — issued a joint statement May 19 calling for nationally coordinated demonstrations May 26 and a national protest June 14 in Paris. The French Senate is due to deliberate about the new labor law on that day.

This union struggle against a law that the French media portray as bringing great benefits to companies operating in France is growing larger and sharper. Though the workers have still failed to shake the government’s refusal to concede, the government is destroying any illusion of French democracy.