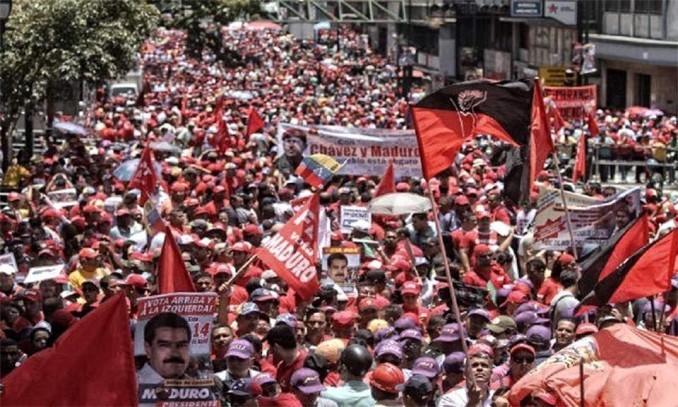 From the Ayacucho Hall of Miraflores Palace, Venezuela’s President Nicolás Maduro held a news conference on May 17 to report on the emergency situation and the dangers facing this South American country.

It’s the first time the Venezuelan government has made a call like this on a truly international level. Venezuelan embassy staff and consulates around the world in all time zones were at the conference, along with solidarity activists in different countries, connected by satellite, internet and various social media platforms such as Skype, Twitter and Instagram. Through these platforms, they sent pictures and asked questions of the president.

During the three-hour conference, Maduro explained and discussed in detail the urgent situation: “Venezuela is currently the target of systematic political, media and diplomatic aggression that goes beyond the boundaries of what we have experienced in 17 years of the Bolivarian Revolution.” Maduro called for “worldwide solidarity of leaders, social movements, presidents, prime ministers of governments around the world. Peace in this America is at stake in Venezuela, along with the future of our own independence in the 21st century.” (avn.info.ve, May 18)

The corporate media, especially in the U.S. and Spain, have been leading a campaign of demonization of Maduro, whom they accuse of tyranny and of causing chaos in the country’s economy that will lead to extreme violence.

In the U.S., it’s enough to look at the latest headlines of the most influential newspapers closest to the political, military and economic sectors — the New York Times, the Washington Post and the Wall Street Journal, respectively. These newspapers serve as spokespeople for the right-wing opposition in Venezuela, especially for the National Assembly, now dominated by the MUD (Table of Democratic Unity).

Although divided among themselves, the right wing are all rushing to overthrow Maduro this year and impose a neoliberal program in Venezuela, thereby destroying the achievements of the Bolivarian process. One example illustrates this: When the National Assembly stated that health was a national emergency — of course, with the goal of privatizing health services — the Times published an alarming article, “Dying Infants and No Medicine: Inside Venezuela’s Failing Hospitals.” (May 15)

But it’s not only the media that are committing aggression. U.S. government officials have attacked Venezuela, highlighted by President Barack Obama’s renewal, for another year, of the executive order imposed March 2015 that declares Venezuela “a danger to U.S. national security.” This is a very serious and dangerous statement, and not only in diplomatic terms.

Washington has intervened, accusing Venezuela of violating human rights by imprisoning Leopoldo López, who it falsely characterizes as part of a peaceful political opposition. In doing so, it ignores López’s complicity in the death of dozens of Venezuelans and gives a big boost to rightist actions seeking destabilization of Venezuela by violent means.

To fulfill his role serving U.S. interests, Secretary General of the Organization of American States Luis Almagro announced on May 13 from Miami that the OAS should apply its Democratic Charter against Venezuela. For the OAS to arrive at a decision, Almagro requested that the National Assembly of Venezuela report on the political situation. Almagro made the announcement at the two-day conference called the “Concordia Summit,” at which 200 rightist representatives of public and private sectors gathered to analyze the situation on the continent.

It’s enough to see the names of the participants to guess its agenda: Luis Alberto Moreno, president of the Inter-American Development Bank, and  former presidents and prime ministers, including Luis Alberto Lacalle of Uruguay, Sebastián Piñera of Chile, Jorge Quiroga of Bolivia, Alvaro Uribe of Colombia and José María Aznar of Spain.

Incidentally, it was at this summit where Uribe called for foreign military intervention to help the Venezuelan opposition.

Imperialism always takes advantage of its target’s difficult situations to extend and exacerbate differences and problems in order to cause a conflagration that aids its goal of exploitation.

In Venezuela, there is indeed a dire economic situation, mainly the result of the fall in oil prices, along with a persistent drought that has caused a lack of drinking water and power outages due to the decline in the water level of dams. Also at play are the consequences of the attack by rightist oligarch importers and manufacturers who monopolize commodities and create shortages in food markets.

All these things, along with capital flight and resale of products in the illegal market, has caused shortages, especially of basic products subsidized by the government. They are sold illegally at higher prices across the border in Colombia, which creates a major crisis due to the lack of basic necessities.

Combined with the shortages and taking advantage of the population’s difficulties, the National Assembly is instigating violent demonstrations in the streets to advance its agenda of holding a recall referendum against Maduro before January 2017. It is rushing because if Maduro is removed this year, the president of the National Assembly, Henry Ramos Allup of the right opposition, would succeed him.

But if the period specified in the constitution lapses, a lengthy process is needed for collecting signatures and validation, etc. According to experts, this could not occur before the third week of January 2017. (Telesur, May 16) If it is delayed until 2017, Maduro’s vice president, Diosdado Cabello, a staunch defender of the Bolivarian Revolution, would succeed him.

To defend the Bolivarian process and its achievements, the government of President Maduro has declared a state of emergency for 60 days and a mobilization for two days of the Bolivarian Armed Forces, along with the people’s militias, to practice defense exercises around the country.

There are several reasons for these measures. Among them are the dangers of violent protests by right-wing groups that attack the National Guard and state buildings; the declaration of rightist Henrique Capriles, who told the BBC that “a military uprising is in the air” and called upon military forces to oppose Maduro. In addition, there was “the incursion into Venezuelan airspace of an American spy aircraft on May 11. This regards a 707 Boeing E-3 Sentry, equipped with cameras, high precision radar and high-tech devices for electronic espionage.” (Avn.info.ve, May 18)

The progressive movement in the U.S. and worldwide must step up its solidarity efforts in defense of the Bolivarian Revolution and to demand no U.S. military or other intervention in Venezuela!