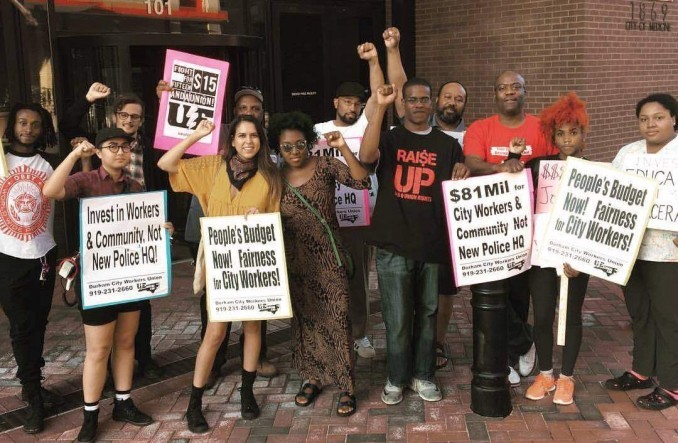 Those struggling to shut down the city’s plans to build a $81 million police headquarters here held their seventh weekly picket outside Durham City Hall on May 16. A coalition of groups known as “Durham Beyond Policing” opposes the new headquarters. Pickets are set to continue as the city debates its budget throughout June.

Earlier, Durham Beyond Policing had given to the council May 16 as a deadline to respond to the call from the community to stop the plans to build the new headquarters. The coalition includes the Black Youth Project 100 (BYP100) Durham chapter; the Durham city workers union, Electrical Workers Local 150; the Say Her Name collective; Southerners on New Ground (SONG); and others.

When the deadline came and passed with no response, city workers and community members marched into the council’s meeting that night and disrupted it with a mic check. The demonstrators reiterated the overwhelming opposition to the new headquarters from the broader Durham community.

The May 16 action and the pickets at city hall are part of a struggle that has been building throughout the year. In 2015, the Durham City Council approved a budget of $62 million to build the new police headquarters in East Durham. There, the building would encroach on working-class communities of color and signify Durham’s rapid gentrification. The cost has since grown by $19 million.

City workers and community members have demanded a “People’s Budget” that serves their needs instead of funding cops and jails. The People’s Budget includes demands for housing, health care, childcare, raises and improved conditions for city workers, and more. Durham Beyond Policing has also gathered more than 500 signatures from the community where the new headquarters is to be built, calling for the immediate end to the city’s plans and support for a People’s Budget.

Pickets and other actions are planned to mobilize the widespread opposition to the new cop castle and fight for a People’s Budget.