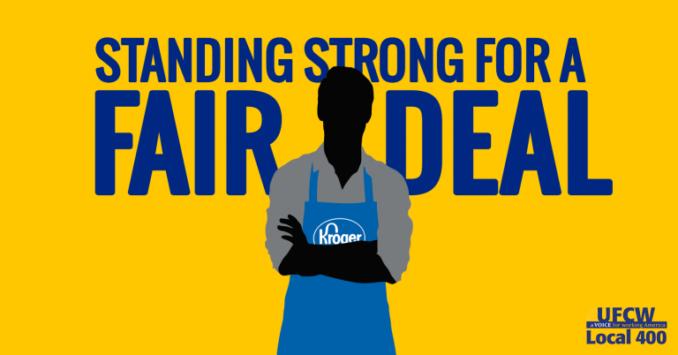 In a fabulous display of working-class power, hundreds of members of the Food and Commercial Workers Local 400 voted unanimously May 18 in Salem, Va., to reject a rotten Kroger contract proposal and authorize their bargaining committee to call a strike. Local 400 members, many of whom drove hundreds of miles to vote, are working at 41 Kroger retail food stores from eastern Tennessee to West Virginia and southwest and central Virginia.

Before the vote, Kroger had said it’s latest contract proposal was its “last, best offer.” After the vote, Kroger agreed to resume bargaining with Local 400 on May 23-24 and to extend the previous contract until June 4.

UFCW members were backed up at the voting site by numerous labor and community supporters, including members of the Coalition For Justice from Blacksburg; Communication Workers who are now striking Verizon; and the Southern Workers Assembly. All of them had support signs and held a banner reading “Solidarity Forever: We Support Kroger Workers.”

A UFCW Local 400 statement after the vote noted, “Kroger’s latest proposal would have provided only slight wage increases and no paid sick days for store associates. It also fell short of renewing the company’s commitment to providing health insurance for its retirees.”

“By rejecting this insulting offer and voting to authorize a strike,” the statement continued, “we sent a strong, clear message to Kroger: We demand a fair deal and we are willing to fight for it.” (ufcw400.org)

While Kroger offered Local 400 members only a 25-cent-an-hour wage increase over the next four years, the company gave CEO Rodney McMullen a 17 percent raise to $11.2 million a year. Other executives also received millions in pay raises. Kroger is now the largest retail food chain in the U.S., after buying Harris Teeter for cash in 2013. Kroger made over $2.4 billion in profits in 2015.

Local 400 members are now engaging in a variety of workplace actions, including outreach to Kroger customers in stores, and external community outreach as part of the current contract campaign.

For more information and how to support Local 400, visit facebook.com/UFCW400 and ufcw400.org.