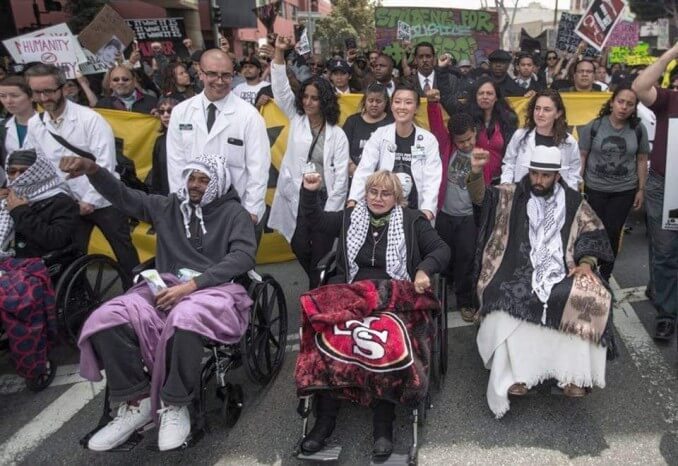 San Francisco, May 19 — It’s less than a month since the “Frisco Five” began a  hunger strike with a single demand: Police Chief Greg Suhr resign or be fired. For five years this chief has been crying crocodile tears while justifying every police killing of a Black or Latino/a person. For five years, this chief has been vigilantly protected by the mayor, the media and the city’s Democratic political establishment.

This afternoon the mayor fired him.

“We know the power of the people made this happen,” said a spokeswoman for the Frisco Five, whose hunger strike lasted 17 days until they were hospitalized. “We have won this battle, but the war is not yet over.”

The fast sparked a surge of furious, non-stop protests, including a march of 300, led by the Frisco Five in wheelchairs, from Hunger Strike HQ at Mission Police Station to a rally of nearly 1,000 at City Hall. Their banner said it all: “Black & Brown Unity against Police Impunity.”

The Five in their wheelchairs then disrupted the Board of Supervisors meeting — challenging the board to go beyond generalities and actually demand that the chief be fired. A week later, four of the supervisors did just that, adding to the growing chorus.

What may have been a decisive moment came on May 6, when hundreds of loudly chanting protesters took over City Hall and occupied it for seven hours, refusing to leave until the chief was fired. Called the #Frisco500, they held their ground after closing time, until sheriff’s deputies brutally removed them by 10:30 p.m., making 33 arrests.

Earlier today, a police sergeant fired one shot at Jessica Williams, 29, a Black woman, apparently after she refused to comply with police orders. She died in the hospital. Police claim she was driving a stolen car in the historically African-American Bayview district.

“It was her execution that finally triggered Chief Suhr’s resignation,” wrote J.P. Massar, an intrepid blogger who puts out timely reports about the people’s welfare. Massar denounced “a police culture that allows firing-squad executions and then has the Chief claim immediately that they are justified.

“The Anti-Police-Terror Project, based in Oakland, was on the job almost immediately as the news of the shooting shot across the twitterverse. They know that in cases like this the police are likely more interested in suppressing evidence and intimidating witnesses, not seeking the truth.”

A group of organizations, including the APTP, Frisco500, The Last 3% of SF, #DoNoHarmCoalition and Black Lives Matter Bay Area, quickly organized a nighttime vigil for Williams near where she was shot.

The online publication 48 Hills posted this: “Another young person of color dead. And still, nobody held accountable.”

SF Public Defender Jeff Adachi wrote: “It is unacceptable for police encounters with unarmed citizens to end in bullet wounds and body bags. … I am deeply disturbed by reports that the young woman gunned down today was driving away from officers. She was entitled to due process and above all, she was entitled to her life.” Adachi has requested that the California Attorney General’s Office “open its own civil rights investigation into the SF Police Department.”

Unfortunately, current Attorney General Kamala Harris, who is now a Democratic Party candidate for U.S. Senate, has refused to prosecute any police officer in California for killing unarmed Black and Brown people, despite repeated requests.