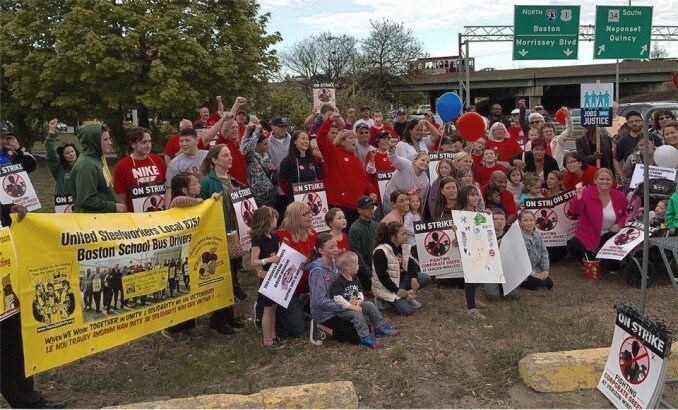 May 22 — “While union workers insist that the strike will impair the company’s customer service calls and equipment installation, Verizon has assured its consumers that this won’t happen,” wrote the April 14 Wall Street Daily. “With little to no detectable change in service Verizon’s stock should see the same minimal change, as the product itself won’t suffer any deterioration.”

This typical capitalist bravado, put out a day after the Verizon strike began, was based on Verizon’s claims of having trained 10,000 potential scabs to do the work of “those who have opted to picket.”

The initial optimism of Wall Street is now being pummeled by a highly effective strike, currently in its sixth week. Stock value is falling as customer complaints skyrocket. Verizon has acknowledged that large numbers of residential customers are switching providers. Municipalities, including seven in Massachusetts, are following suit. Small businesses are blaming Verizon, not the unions, for the harm caused them by the company’s failure to provide necessary services.

The overwhelming majority of the 39,000 strikers, members of the Communications Workers and the International Electrical Workers, continue to “opt to picket,” with only handfuls here and there crossing the lines. In fact, picketing is the only option for these workers.

To counter the company lies in the media, the CWA launched a radio ad campaign stating: “The system is rigged. Rich get richer while the rest of us struggle to get by. This isn’t theory, it’s real. Verizon makes $1.5 billion a month in profits and top executives pay themselves nearly 50 million a year while trying to take away job security from workers. That’s why Verizon workers are on strike.”

The state steps in

The strike’s effectiveness prompted U.S. Labor Secretary Thomas Perez to insert himself into the bargaining process. Both parties were called together to meet in the presence of Perez and experienced federal mediator Allison Beck under the auspices of the Department of Labor. There they agreed that no public statements would be made during the talks. Under what amounts to a gag order, the unions cannot inform rank-and-file members of how — or if — the talks are progressing.

Why would such a high-ranking member of the capitalist state intervene in a labor dispute between a private employer and two private sector unions? One factor might be the location of the strike. New York is home to Wall Street. If the strike continues, it might not just be restaurants, shops and doctors’ offices having to get by without phone or internet service — big banks could be affected.

Moreover, Verizon provides services to the Pentagon. Wireline workers are on strike in Washington, D.C., and all of Virginia. Verizon has contracts with military bases across the country. If the strike drags on, war plans could be disrupted!

The CWA and IBEW should not put too much faith in the Democratic administration. It’s worth remembering that in 1978 President Jimmy Carter invoked Taft-Hartley — as President Harry Truman did decades before him — and used federal troops against striking coal miners.

Dozens of solidarity actions were held from coast to coast on May 21 as part of “Children’s Day.” Children of New York strikers took turns leading chants and picketing in front of a Brooklyn Verizon wireless store, while 200 CWA members and supporters chanted along from the sidewalk and street. One picket captain told Workers World, “People in the neighborhood don’t cross the picket line.” The union treated the children to balloons, popcorn, cotton candy and ordered lunch for everyone.

Members of CWA locals 2201 and 2204 continue to stand strong on the picket lines across Virginia, receiving broad labor and community support. The week of May 15 numerous solidarity actions took place. In Roanoke, the Citizens’ Convention and Plowshare Peace & Justice Center began sponsoring a weekly picket line.

The Southern Workers Assembly continues to join picket lines, email appeals for strike funds and assist with visibility and outreach work. Many other unions and labor-community organizations are contributing financially and providing much-needed supplies for striking workers.

In a show of solidarity, CWA strikers came out to support the Food and Commercial Workers Local 400 during their strike vote May 18 in Salem, Va. Local 400 members voted down a horrendous contract proposal from Kroger and granted their bargaining team the right to call a strike if necessary.

The Blacksburg Coalition For Justice, the Southern Workers Assembly and other labor-community organizations hoisted banners and placards to show support for the CWA-IBEW striking workers at Verizon and the UFCW Local 400 members in their contract battle. This solidarity boosted the spirits of CWA, IBEW and UFCW members and their supporters and received widespread coverage in both corporate and social media.

Members and leaders from Pennsylvania, Delaware, D.C., Maryland, Virginia and West Virginia will attend the next major solidarity action in southwest Virginia, a May 28 rally in Roanoke. For more information, visit bit.ly/22kHNfB.

Sara Catalinotto and WW staff in Virginia contributed to this article.