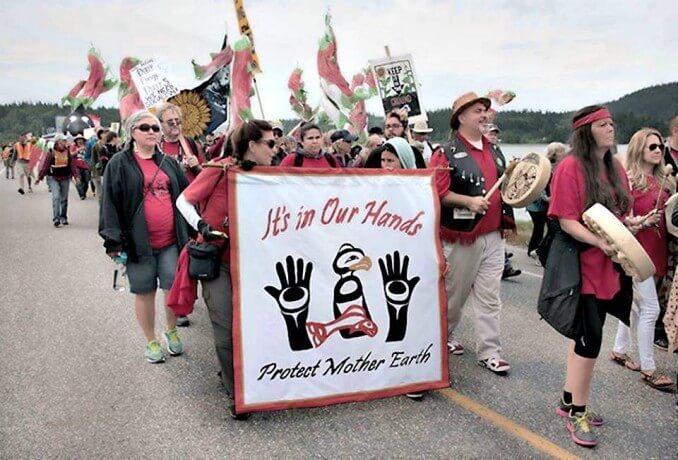 Anacortes, Wash. – From May 13 through May 15, the group “Break Free Pacific Northwest” held a weekend of actions to oppose global climate change, on and around March Point, a peninsula where two huge oil refineries owned by Tesoro Corp. and Shell Oil are located.  The peninsula, which is near Anacortes, sticks out for three miles into the Salish Sea, also known as Puget Sound. The actions included a march and rally led by Indigenous people, kayak actions on the water, a railroad track blockage with 52 arrests, and a three-day climate conference.

Break Free PNW is composed of at least 40 environmental and social justice groups in alliance with Native peoples from around the Salish Sea area.  The movement is fighting to break free from fossil fuel use. But “the U.S. is the one who’s kept climate negotiations from having enforcement mechanisms,” said Sarrah Tekola from the allied organization, “Women of Color Speak Out.”

BreakFreePNW.org says, “A just transition from fossil fuels provides real alternatives to communities dependent on dirty infrastructure, protects workers’ job security as fossil fuel use declines … supporting the communities most impacted by fossil fuels, here and around the world.”

Some 150 participants seized the Burlington Northern Santa Fe (BNSF) tracks leading into March Point as the weekend got underway.  The next day, Saturday, May 14, was the Indigenous Day of Action.  The local Swinomish People and other Native peoples led a march of nearly 1,000 people for three miles up March Point, where a rally was held with speakers, dancers and drummers.

Although March Point was on reservation land, the federal government took March Point from the Swinomish in the 19th century. At this action, people in a hundred kayaks came over from Anacortes to demonstrate and converged with the rally.

On May 15, state, local and BNSF cops with guns drawn came and arrested 52 demonstrators who had pitched their occupation tents on the tracks for nearly two days.  No trains had been able to come through during this time.  The remaining 100 occupiers, in defiance, marched up the tracks a ways to attempt a second occupation, but the cops got in front of them.  Those arrested were released after six hours.

Organizers are committed to stopping all ten large terminal or infrastructure projects for coal, liquefied natural gas, oil, etc., scheduled for the Northwest.  The Lummi Nation was honored at the Saturday rally for stopping the building of a proposed massive coal port on their land by the SSA Marine company.

Break Free events were held around the globe from May 3 through May 15, with 30,000 participants in 20 civil disobedience actions, according to the BreakFree2016 website.