Michigan political prisoner the Rev. Edward Pinkney had his appeal placed on hold May 12 following oral arguments in his case on May 11. A three-judge panel of the Michigan Court of Appeals in Grand Rapids ordered the appeal “held in abeyance” until the Michigan Supreme Court decides People v. Hall, which could have bearing on the severity of the sentence imposed on Rev. Pinkney.

Pinkney was the leader of an election recall campaign against the mayor of Benton Harbor, Mich. He was charged with felony forgery when five dates on the petitions were alleged to have been altered. No evidence was presented to the all-white jury except that Rev. Pinkney was a vocal and well known African-American activist. In December 2014, he was sentenced to 2.5 to 10 years in prison. 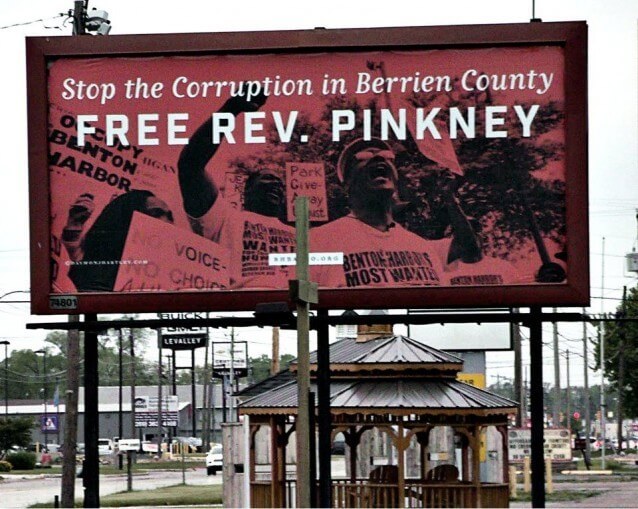 Free Rev. Pinkney billboards have been put up along routes M-139 and I-94 in Benton Harbor, Mich.

Appeal briefs were filed in the fall of 2015 by attorney Tim Holloway, along with amicus briefs from the American Civil Liberties Union and the National Lawyers Guild. On May 11 during the Court of Appeals hearing, Chief Judge Colleen O’Brien asked the attorneys many questions about the sentencing provisions of the law and the impact of the Hall case. The final decision in People v. Hall could be an important factor, separate from the issue of guilt or innocence, in challenging the excessive prison sentence handed down to Rev. Pinkney.

On May 16, Holloway filed a new brief and motion with the court requesting bond and freedom for Rev. Pinkney based on the new status of his case being left undecided, possibly for many months. In anticipation of granting of bond, many supporters have called for donations to be collected.

On May 28, supporters of Rev. Pinkney will demonstrate in his home town of Benton Harbor demanding his freedom. The protest coincides with the Professional Golf Association tour, played on a golf course built on land stolen from a public park given in perpetuity to the people of Benton Harbor. Over a decade ago Rev. Pinkney began protests against the seizure of land from the Jean Klock Park on the shores of Lake Michigan.