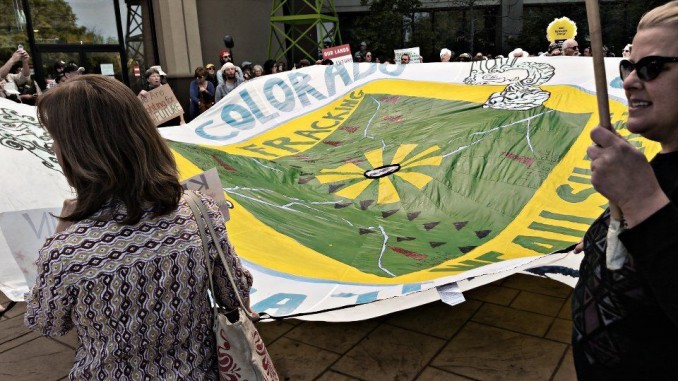 Protests against the use of fossil fuels and hydraulic fracturing have been taking place in Colorado. All over the state, people are urging that fossil fuels be kept in the ground.

Coloradans are coming out to defend the right of their communities to protect themselves against an invasion by gas and oil companies that are buying up public lands for a song in order to drill in, under and around towns. Some 7,000 acres have already been sold.

Members of Greenpeace, Food and Water Watch, Frack Free Colorado and 350.org, in addition to many residents of threatened Colorado towns, participated in a well-organized protest on May 12. More than 300 angry protesters gathered in Lakewood, outside a Holiday Inn near Denver, risking arrest by blockading a meeting of the Bureau of Land Management. On May 14 hundreds of people again protested at active drilling sites in Thornton, north of Denver, with more than 50 risking arrest at one site.

Proposals are in the works to drill in the developed area near Denver’s airport and in the thousands of acres of the Denver watershed in the South Platte River Basin. This has caused loud opposition and bans from residents whose health and lives will be dramatically affected. People’s property values have also plummeted. Residents have no idea when and where the next drilling is going to take place.

Bill McKibben from 350.org has spoken at many of the national protests and in Colorado on May 14. A recent article by McKibben in The Nation, based on a study by Harvard scientists, showed a dramatic increase in the amount of methane released by current drilling and fracking around the world.

The U.S. Environmental Protection Agency recently proposed national limits on methane released by fracking, but they would affect only new wells — about 2 percent of the total — and not touch the higher-polluting older wells. This move was made just before national and worldwide protests.

However, towns can no longer refuse to allow fracking nearby, since the Colorado Supreme Court in April overturned local fracking bans and moratoriums that had been in place in Longmont and Boulder. The court ruled that towns cannot interfere with “maximum production of oil and gas.” Before this, towns that wanted to institute bans on fracking to protect the health of their residents were sued or threatened with suits by the oil and gas companies.

Colorado politicians, including the governor, have been strong supporters of gas and oil drilling as well as the expansion of coal mining at the huge Elk River mine, which contains 10 million tons of methane-rich coal.

The mine is another huge source of unregulated methane gas release that is causing extreme and rapid warming of the planet. Journalists from the Colorado Independent climbed into the hills and through mud in the backwoods to photograph open methane vents they say are releasing enough methane to heat 30,000 homes. Despite this, the mining companies are seeking a huge expansion.

Modern hydraulic fracturing is a newer industrial process that drills wells as deep as 30,000 feet deep and horizontally as far as 30,000 feet under towns and homes in housing developments and dense populations. The wells have created mega-industrial sites in quiet towns and small cities all over Colorado. The dust, noise and vibration have radically altered life in these areas and caused residents to plead for their physical safety and mental health.

In a meeting this past fall of the Colorado Oil and Gas Conservation Commission — a tool of the oil and gas industry — many Colorado residents who live near fracking industrial sites spoke bitterly of not being able to sit outside in the day or sleep at night because of the dust, noise and vibration in their homes. They were also concerned about the contamination of their farm animals.

The methane released is supposedly trapped, but much escapes into the atmosphere at all levels of the production process. Methane is at least 25 times more heat trapping in the atmosphere than CO2. It may have contributed to many of the sudden weather catastrophes in the last 10 to 15 years.

The 50,000 fracking wells that have already been drilled in this arid state use up to 6 million gallons of water per well to crack the rock and release the oil and gas trapped inside. Toxic wastewater coming from the wells is sometimes kept in above-ground pools that can leak into groundwater. Mostly however, the wastewater is forced down an injection well maybe 10,000 feet deep, which can endanger water tables and has already caused earthquakes.

Recently there has been disturbing news that “cleansed” toxic wastewater is being used for watering vegetables in California.

This new industry is also dangerous to the health of the oil and gas workers, who are exposed to chemicals and dust. According to the Occupational Safety and Health Administration, 823 fracking workers died in oil and gas extraction from 2003 to 2010. Their death rate is seven times higher than the general U.S. industrial rate.

Signatures are now being collected by Coloradans to place two issues on the November ballot that would affect the state constitution. One would allow towns to again ban fracking; the other would require fracking to occur 2,500 feet away from any areas of human activity, allowing a minimum of safety.

Meanwhile, Kathleen Sgamma, vice president of government and public affairs for the Western Energy Alliance, which wants to hold the land auctions online, called the protests a “circus.” (Denver Post, May 12)

It is clear that we cannot allow fossil fuels to enrich the few and destroy the planet for the many. Here in Colorado the oil and gas industry is not only threatening the watersheds but also the food supply. We must support research and building of other sources of energy, ways of heating our homes and modifying our production to keep the planet from heating up and becoming unlivable.