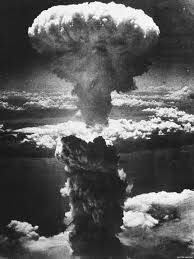 President Barack Obama’s visit to Hiroshima, Japan, on May 27 will be the first such visit by a U.S. president in office. This visit has a historical background and a present meaning; it will have a pacifist facade while the U.S. prepares for imperialist war. Obama’s visit comes nearly 71 years after one U.S. atomic bomb in one flash destroyed 60 percent of the city and its people.

World War II broke out in the Pacific in December 1941 after decades of competition between the imperialists of Japan and the U.S. for domination of the markets, raw materials and labor power of Asia.

Millions of workers and farmers fought in that war, which served only the interests of the super-rich. The war’s casualties included workers and farmers of China, Korea, Southeast Asia, the Philippines and the islands that are now Indonesia. Japan occupied these areas and later fought against U.S. troops as well as national liberation movements. Both Japanese and U.S. troops were casualties, as were millions of Japanese civilians who lived in 68 city centers that U.S. incendiary bombs reduced to ashes.

The war’s final victims were the 100,000-plus Japanese people killed instantly by atomic bombs in the cities of Hiroshima on Aug. 6, 1945, and Nagasaki on Aug. 9. Along with them were 30,000 Koreans the Japanese army had forced to work there, plus another 100,000 people who died slowly from radiation poisoning. The war in Asia was nearly over. Washington’s purpose for using these terrible weapons at the very end was to intimidate the Soviet Union — by showing that U.S. imperialism had the military means to dominate the post-war world.

Tokyo soon after surrendered to the U.S., which then occupied Japan. Despite the enormous U.S. military and economic advantages in 1945, however, the Chinese, Korean and Vietnamese revolutions went on to liberate much of Asia from imperialist control.

According to the April 16 Military Times, “U.S. Forces Japan consists of about 2,000 soldiers, 6,000 sailors, 15,000 airmen and Air Force civilians, and about 18,000 Marines, who are mostly based in Okinawa.” On tiny Okinawa, which Japan claims despite a strong independence movement, the local population holds massive protests against the U.S. military and its crimes, from environmental destruction to rape.

The May 12 New York Times reported that Obama’s talk in Japan would plead for no future use of nuclear weapons — although he would avoid condemning the U.S. bombing of Hiroshima. In a visit filled with contradictions and doublespeak, President Obama comes not as a world peacemaker, but as U.S. imperialism’s commander in chief. Behind the peaceful facade is the so-called U.S. “pivot to Asia.”

Even at its peak of power in 1945, the U.S. couldn’t unilaterally dominate the world. Relatively weaker now, but still possessing enormous destructive power, Washington’s “pivot to Asia” means strengthening its alliance with the ruling class of Japan so that, under U.S. leadership, the two imperialist powers can intimidate, threaten and even make war against China and north Korea, the DPRK.

The Japanese rulers, as represented by the right-wing Shinzō Abe government, have accepted U.S. insistence for increased militarization as their own policy. The Abe government has already approved plans to allow Japan’s “Self-Defense Force” to intervene abroad, despite massive popular opposition. Washington has urged this policy on Tokyo, just as it urges its NATO allies to spend more on arms.

Despite its doublespeak on worldwide nuclear disarmament, the Obama administration has already pushed to modernize the U.S. nuclear weapons stockpile, with plans to spend as much as $1 trillion over three decades.

Disguised as a move for peace, the visit to Hiroshima is really a showpiece to consecrate an aggressive imperialist alliance.

In response to Obama’s trip and in solidarity with the Okinawan and Japanese people, the WWP presidential campaign demands that the U.S. take all its troops and bases out of Japan and Okinawa. WWP pledges solidarity with and support for the struggle of the Japanese people to reverse the aggressive arming of Japan’s military.

In solidarity with the other peoples of Asia, WWP demands the withdrawal of U.S. military forces from all countries and territories in the Asia-Pacific region.

WWP calls upon the working classes of the U.S. and Japan to strengthen their mutual solidarity against the imperialist bosses of both countries. We in the U.S. pledge to fight all military or economic aggression by U.S. imperialism throughout Asia and to put an end to anti-Asian bigotry at home.