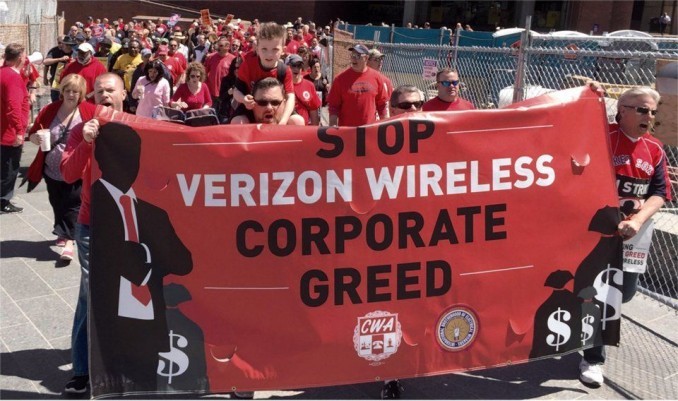 Nearly 1,000 strikers and their supporters demonstrated their rock-solid determination to win against Verizon’s corporate war on the hardworking members of the International Electrical Workers and the Communication Workers unions by occupying the streets on May 11. They marched from three locations throughout downtown Boston — the State House, City Hall and Post Office Square — converging in a militant and massive rally at Verizon headquarters at 6 Bowdoin Square.

Organized by the indefatigable IBEW Local 2222, led by Business Manager Myles Calvey and President Eddie Hastings, the demonstrators were a virtual flood of red shirts! The strikers were joined by contingents from Team Solidarity; Steelworkers Local 8751, Boston School Bus Drivers; the Massachusetts Nurses Association; Service Employees Local 1199; Postal Workers; Ironworkers; Steelworkers; as well as representatives of many of the public sector workers’ unions in town.

Speakers at the rally included the leaders of the Massachusetts AFL-CIO, the Greater Boston Labor Council, community and political leaders, and many supporting unions. Hastings fired up the crowd, explaining that the strike was gaining momentum and support daily and that the ranks are determined to win. 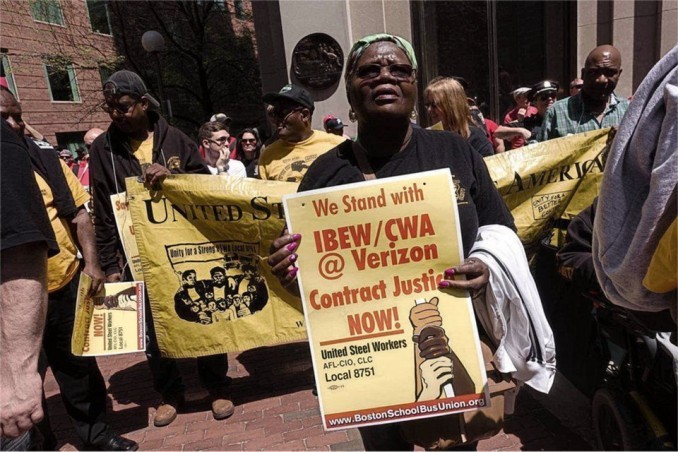 In keeping with tradition, the final speaker was Eddie “Fitz” Fitzpatrick, retired (from office, but never the struggle!) president and the recognized heart and soul of the union. Fitzy gave a long, impassioned appeal for determination in the ranks to proudly withstand the suffering caused by Verizon’s cruel war and a sobering challenge to the labor movement to more broadly organize the solidarity necessary to win this fight, which so represents corporate America’s war on the unions and the entire working class. He ended his speech as he has at every rally for 30-plus years: “We’re proven! We’re union! Hang tough!”

In other developments, IBEW 2222 has organized massive “Wake-Up Calls” at area hotels where the scabs are staying, resulting in many being evicted. On May 12 at 8:30 a.m. at one such hotel, the Extended Stay in Westborough, Mass., a drunk Florida scab drove into the picket line, injuring striker Joseph Rooney and hitting a cop. After this lowlife’s arrest, it was disclosed that this was his 4th DUI and he was operating without a license!

The next day, the union doubled the mass picket to send the clear message that the union will not be intimidated. They have also picketed restaurants that were catering the scabs, forcing them to stop. Verizon is now bringing charges against the union with the National Labor Relations Board and in federal court, in an attempt to stop the “Wake Up” actions.

The union is fighting back! IBEW 2222 is planning for two major “Family Day“ pickets in Boston, on Thursday, May 19, at 4 p.m. at the Verizon Wireless Store, 770 Gallivan Blvd. in Dorchester; and on Saturday, May 21, at 2 p.m. at Verizon headquarters, 6 Bowdoin Square in Boston.