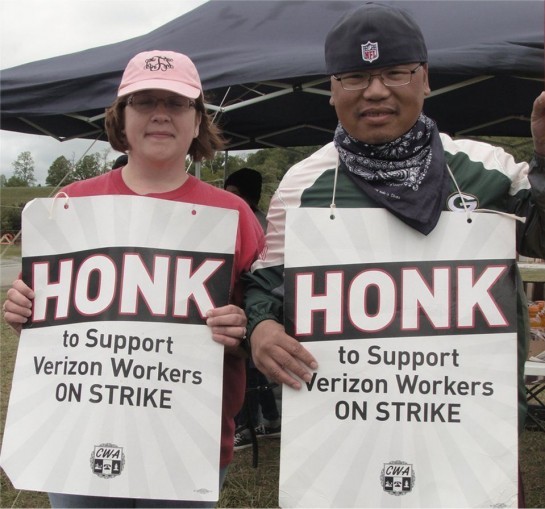 For more than a month, Verizon workers in the company’s landline and broadband FIOS sectors have been on strike in Washington, D.C., and nine East Coast states. These members of the Communication Workers (CWA) and the International Electrical Workers (IBEW), who have worked without a contract since Aug. 1, walked off their jobs on April 13 after months of unproductive negotiations.

These workers are bravely fighting for their jobs and benefits against a corporate monolith. They know the history of job loss in the company, which has cut its workforce through attrition, pressure on senior workers to retire, outsourcing and offshoring. In 2000, 80,000 Verizon workers went on strike; in 2011, the workforce of 45,000 struck for two weeks. Today, 39,000 women and men are on the picket lines, fiercely determined to protect their livelihoods.

Their fight has implications for the entire U.S. multinational working class and those in the global workforce. These workers are standing up to a transnational corporation that has $244 billion in assets and reaped $39 billion in profits over the last three years. In 2015, the cable monopoly gained $17.9 billion in profits and purchased AOL for $4.4 billion. Recently, it purchased AwesomenessTV, a digital studio. The communications giant was also helped by the federal government to garner even more revenue: From 2008 to 2013, the company received $732 million in tax refunds.

All this wealth was created by the labor of past and present Verizon workers. But the way the capitalist system works, the corporate owners always seek to maximize profits, and in today’s cutthroat global economy that means slashing labor costs however they can — reducing benefits, tossing longtime workers onto unemployment lines or forcing them into retirement.

Verizon aims to close East Coast call centers, eliminate those union jobs, among others, and ship the work to non-union domestic contractors or out of the country. Executives are demanding more cuts in health care, retirement and disability benefits; “forced relocation” assignments, in which workers would be required to commute far from their families; and elimination of job security.

A critical issue for the strikers is the offshoring of jobs overseas. Some 13,000 of the strikers are call center workers. Their unions say that Verizon is transferring far more customer service jobs than they admit to call centers in the Philippines, where workers are being paid poverty wages of $1.78 an hour to handle calls from irate U.S. customers. While they must work overtime, they are denied overtime pay rates.

A May 13 CWA press release reports that the union was contacted by call center workers in the Philippines, who said Verizon was “lying to our members and the public about the extent of offshoring” good jobs. In response, during the week of May 9 the union sent a delegation to the Philippines to uncover the truth.

The CWA team traveled with representatives of UNI, a global labor federation, and KUM, a Filipino union. When they discovered “how Verizon is padding its incredible profit margins by replacing good-paying [U.S.] jobs with poverty-wage jobs abroad, Verizon sent armed guards and a SWAT team after them,” read the press release. Verizon executives refused to meet with the union members at company headquarters in Alabang, south of Manila; instead they were surrounded by masked guards brandishing automatic weapons.

There should be no quarrel with the workers in the Philippines, Mexico or any other country. Verizon is exploiting their labor and making super-profits by paying these workers the lowest wages they can get away with in their “race to the bottom.” These workers are all part of the global working class and deserve livable wages, benefits, unionization — and solidarity, too.

‘One day longer, one day stronger’

CWA members, locals and community and union allies, including the AFL-CIO and Jobs with Justice, are picketing Verizon Wireless stores in every CWA district. Locals of the Food and Commercial Workers, Amalgamated Transit Union and American Federation of Teachers are joining them.

Targeting Wireless stores is important because Verizon is trying to keep unions out of the expanding Wireless division, while executives aim to eliminate the old copper network in the shrinking Wireline division, which has unionized technicians. Although workers at some Wireless stores have organized, Verizon won’t negotiate contracts with them.

CWA and IBEW members are maintaining strong picket lines to pressure Verizon. Their chant is “One day longer, one day stronger.” A National Day of Strike Action was held on May 5 with 400 protests. (See “Wide support for striking workers” posted May 11 at workers.org.)

Since the strike began, the workers have waited for Verizon to “get serious” about negotiating a fair contract, but the company has been intransigent in their demands for major concessions. Executives even cancelled strikers’ health insurance on May Day, but the unions are assisting strikers in obtaining coverage.

The federal government just intervened. Secretary of Labor Thomas E. Perez initiated a meeting with Verizon CEO Lowell McAdam, CWA President Chris Shelton and IBEW President Lonnie Stephenson, which took place on May 15, and called for negotiations to resume. A session is now scheduled for May 17. However, it should be noted that the federal government intervened during the 2011 strike, and many workers were dissatisfied with the resulting contract because of reductions in health care and pension benefits, job security and more.

The Verizon strikers are risking a lot, having boldly taken on this global monopoly. Many of these courageous workers are women; many are African American. They have put their jobs on the line and are fighting to keep their hard-won benefits. But they are also standing up for the right of the entire working class to have decent jobs, wages, benefits and a union. Solidarity should be extended to them on the picket lines, at rallies, via petitions and in every possible arena.